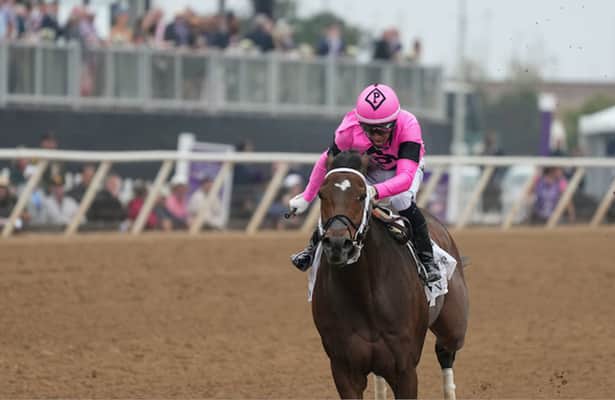 American racing is built for speed. Going fast and retiring early has become the name of the game. The days of superstars such as Kelso and Shuvee relishing every furlong of the 2-mile Jockey Club Gold Cup are all but a distant memory to the most experienced followers of the sport.

Marathoners of today are a niche set; they are an oddity rather than a headliner. No horse epitomizes this more than the unsung star of the 2021 racing season, Lone Rock.

By conventional standards, the gelded son of Majestic Warrior should be getting more attention. In his last 11 starts, Lone Rock has won nine times with two seconds. Gaudy numbers for a horse who dominated the fields of the only two graded stakes in which he ran last year.

Few noticed, however, when he ran away from the field in the Brooklyn Invitational (G2) by 11 1/4 lengths – it was on Belmont Stakes Day. There was even less buzz when he decisively put away Tizamagician in the Thoroughbred Aftercare Alliance Stakes (G2) as part of the Breeders’ Cup card.

Two such impressive wins on major race days, and on opposite coasts, should garner attention, especially when you consider that they were part of a seven-victory season, which included stakes wins at five of the best racetracks in the nation: Churchill Downs, Belmont, Saratoga, Del Mar and Oaklawn Park. Yet no one seemed to care.

The Brooklyn at 12 furlongs and the Thoroughbred Aftercare Alliance at 13 furlongs were simply too far. So was the 14-furlong Birdstone at Saratoga, which he won by a stylish four lengths.

Lone Rock’s breakout season of 2021 was not easy to see coming, but two wins at the end of the 2020 season might have been the tipoff. He had run in a few stakes over the years and even won a small one at Remington Park in 2018, but for his first four seasons on the racetrack, he was primarily an allowance horse.

Dropped in for a tag in the final two races of his 5-year-old season at Keeneland and Churchill Downs, Lone Rock won both nicely and was claimed out of each. Ultimately, he ended up with Flying P Stable in the barn of Robertino Diodoro.

Neither Diodoro nor his rider of the last seven races, Ramon Vasquez, are household names. They win plenty, though, and with Lone Rock last year, they nearly swept the table. A couple of narrow losses were all that stood in the way of a 9-for-9 season.

Lone Rock was so good in 2021 that it begs the question whether a horse who competes in primarily marathon races can compete with the top horses at America’s most popular distances.

A $55,000 yearling purchase back in 2016, the 7-year-old gelding likely will get an opportunity to answer the question this year. By winning the inaugural Tinsel Stakes at Oaklawn Park a few weeks ago, Lone Rock attempted to break away from the modern stigma of being only a marathoner.

After seven consecutive starts at 12 furlongs or more, the 9-furlong race demonstrated a willingness by his connections to try their stable star outside of his sweet spot, and it was a success.

How much of a success remains to be seen. He overcame traffic and an inside trip on a muddy racing surface to win by three-quarters of a length. It was not a stellar field, but he was clearly best over stakes-quality horses: Thomas Shelby, Beau Luminarie, Warrior's Charge, Tenfold and Title Ready.

It was a solid win against a decent field but far from proof that he will be a Breeders’ Cup Classic type of horse come early November. Still, it was a positive step for a horse who was so good last year in the best long-distance dirt races around.

If the experiment fails and he proves non-competitive against the best in the nation at 10 furlongs or less, he still will have the option to try to defend his title as the best of the marathoners. I, for one, think it is a title worth recognizing.