Zipse: Life Is Good should get his mojo back in the Nerud 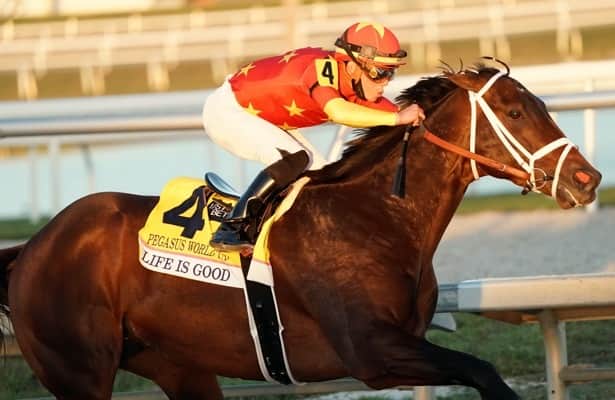 Saturday’s Grade 2, seven-furlong John A. Nerud at Belmont Park would seem an unlikely spot to play a role in the older male dirt championship and the Horse of the Year race, but it very well could be an important race for each.

When Life Is Good won the Breeders' Cup Dirt Mile in November and the Pegasus World Cup (G1) in January, both in dominating fashion, he was on top of the racing world.

Several months removed from his last big win, the talented son of Into Mischief now plays a distant second fiddle behind Flightline on both headlines and hype.

While his rival to be has looked as good as it gets in four overpowering wins to begin his career, including a devastating win in the Met Mile (G1) a few weeks ago, Life Is Good will need to remind everyone why he was so highly regarded a few months back.

When last seen on American soil, the Todd Pletcher-trained 4-year-old was running away from the Horse of the Year Knicks Go at in the Pegasus World Cup at Gulfstream Park in a wonderful display of speed and class.

The Pegasus victory was his sixth impressive win in his seven career starts. Only a topnotch performance when edged by the champion sprinter Jackie’s Warrior in the Jerkens Memorial (G1) stands in the way of a spotless record.

At the time, his Hall of Fame trainer raved about him as the best he’s ever had in his barn. Then the Dubai World Cup (G1) happened.

In the time it took for Life Is Good to fade down the Meydan stretch to finish fourth in the 1 1/4-mile, $12 million race overseas, his aura of invincibility was lost and has since found its way to a different horse.

The 2022 racing season is far from over, though, and Life Is Good will have every opportunity to regain all that was lost in Dubai.

Don’t call it a comeback, but starting with his return race in the Nerud on Saturday, and likely to be followed by a run in the prestigious Whitney (G1) at Saratoga five weeks later, Life Is Good could, and should, make a triumphant return to the limelight.

Life Is Good is a special and unique talent. The runner owned by WinStar Farm and China Horse Club always has been.

From the day he was purchased for $525,000 as a yearling to an eye-opening debut win at Del Mar in November of his 2-year-old season, all the way through a series of statement stakes wins – none bigger than his romping win in the $3 million race two starts back – Life Is Good has been the real deal.

Racing fans and handicappers can be a fickle bunch. Flightline is clearly the "now" horse, but things can turn quickly in this sport.

It’s not easy to come back to American racing sharp after a tough race such as the Dubai World Cup, and especially so when asked to run against fast sprinters going seven furlongs, but this is no ordinary horse.

Three months removed from his first disappointing race, I expect Life Is Good to shine again and do so in a big way.