Zipse: Letruska as horse of the year? It could happen 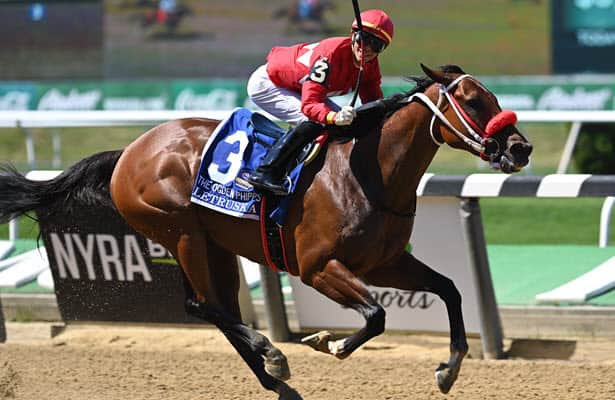 It us something more out of a Hollywood script than reality. Who would have thought that a homebred filly who made her first six career starts in Mexico City would legitimately have a chance to be named Horse of the Year?

With one race yet to go in 2021, Letruska might make the far-fetched story become reality.

Trained by Fausto Gutierrez and owned by St. George Stable, Letruska is a winner of six of seven starts in 2021 and is on track to be a heavy favorite when the gates open for the $2 million Breeders’ Cup Distaff in two weeks at Del Mar. A win there, and she would have completed a magical season worthy of celebration. But will it be enough to overtake the males in the horse of the year race?

Knicks Go, who is 5, and Essential Quality, who is 3, likely have the inside track to the top honor right now. If either of them win the Breeders’ Cup Classic, they will probably get more votes than the 5-year-old daughter of Super Saver. After all, it is rare for a female to win the award in American racing. Only four (Azeri, Havre de Grace, Rachel Alexandra and Zenyatta) have won it in the last 34 years.

Demonstrating just how big a mountain Letruska is trying to climb, Azeri is the only female in modern racing to have been named Horse of the Year while racing only against females in her championship season.

Knicks Go and Essential Quality control their own destiny in the Classic, but they still have to navigate a very difficult assignment. A victory probably would get one of them the award, but perhaps it shouldn’t. Letruska has been that good.

Much like the beginning of her career, her 2021 season began in an unlikely place. Her dominant win in January at Sam Houston in the Houston Ladies Classic (G3) shows what a complete season she has had. From January through today, Letruska has been a running machine.

Perhaps the biggest feather in her cap in the Horse of the Year race is her tally of Grade 1 victories. To date, she has won the Apple Blossom, Ogden Phipps, Personal Ensign and Spinster. Those four Grade 1 wins at four race tracks give her as many as Knicks Go and Essential Quality combined. Those leading males have only two each.

Another strong point to be made in favor of Letruska has been her consistency. Not only does she have six wins in seven starts this year, but you easily could argue that in her lone loss, she was the victim of racing luck. She was charging hard in the Azeri (G2) in March at Oaklawn but came up a head short behind her top rival in the older dirt female division, Shedaresthedevil.

In that lone loss of the season, she gave the winner five pounds and certainly did not have as good a trip as did Shedaresthedevil. She is that close to an undefeated season. Letruska certainly left no doubt as to who was better when they met again a few months later on Belmont Stakes Day in the Ogden Phipps.

A true Cinderella story, she has also been a horse of the people in 2021. Letruska will make her first start at Del Mar in a few weeks. If she can win on the big stage there, it would be her seventh graded stakes win of the season. Proving that she can win anywhere, each of those seven wins would have come at a different race track.

If she does indeed win the Breeders’ Cup Distaff, Letruska would complete a season very similar to what was accomplished by Azeri in 2002. They both would have only one second-place finish early in the season, preventing a perfect season, and their year would be highlighted by seven graded-stakes victories, including the Breeders’ Cup.

Nearly two decades after Azeri did it, there is really only one criterion where Letruska falls short in the Horse of the Year race, and it is a big one. She has not faced males. Is that alone enough to prevent her from winning American racing’s top yearly honor? I do not think it should be.

If she wins the Breeders’ Cup Distaff on Nov. 6 at Del Mar, I believe Letruska would make a great case to be awarded the 2021 Horse of the Year title, no matter what happens in the Classic.