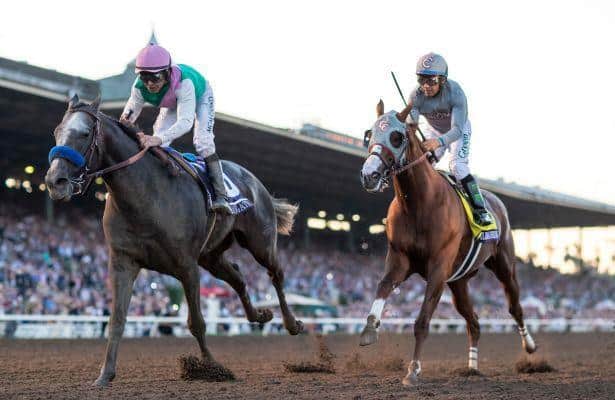 On July 1, the mid-point of 2016, the leaders of America’s glamour division were Nyquist, Exaggerator, and Creator. Not coincidently, the trio had combined to account for the Kentucky Derby, Preakness, and Belmont, but they also had credentials past the three legs of the Triple Crown. Nyquist was the returning champion, who to that point had suffered only one loss, when a game third in the Preakness. His vanquisher in Baltimore, Exaggerator had been knocking on the door for some time previously against Nyquist, but was also a multiple stakes winner, including a big win in the Santa Anita Derby. Finally, Creator did not have the overall resume of the other two, but with late-running scores in the Belmont, as well as the Arkansas Derby, the son of Tapit was the now horse. The three were truly on top of the world of American racing.

Oh, how things have changed in five short months. Since that point, the trio has won but a single race. As a matter of fact, Nyquist, Exaggerator, and Creator, as a group, failed to finish in the money in six of the seven starts they made after the Triple Crown. Only the win by Exaggerator, in a sloppy edition of the Haskell, interrupted their second half of the season futility. The three-year-old male division was certainly ripe for a takeover, and the late bloomers were more than ready to do so in style.

Perhaps the best example of a late blooming three-year-old taking over the division in decades, Arrogate will be named champion in a few months. After putting together a trio of wins in a maiden race and two allowance races in California, the robust son of Unbridled’s Song has transitioned from a young horse moving through his conditions to a soon to be Eclipse Award winner in unbelievable style.

To say his stakes debut was a splash, of course would be a huge understatement. Margin of victory, final time, competition defeated … once you consider all the factors together, it is hard not to call Arrogate’s runaway victory in the prestigious Travers Stakes the greatest performance ever in the long history of the Grade 1 race at Saratoga. The only question became whether the Bob Baffert star would validate that run in an even tougher test. Taking on California Chrome, the undisputed King of the older runners, as well as North America’s richest all-time runner, seemed like it might be a bit too much for the inexperienced colt, but that is exactly what he did in a Breeders’ Cup Classic that will not be soon forgotten.

While not quite the high profile of Arrogate, Connect is another late bloomer with two very big wins to close out his sophomore season. He, also like Arrogate, will complete his three-year-old season with an excellent record of five wins in six starts. Much talked about in the mornings this spring in New York, the good-looking son of Curlin made an impression on Belmont Stakes Day with an impressive allowance win. Since then, he has done little to disappoint. A nice stakes win at Saratoga was followed by a slightly disappointing middle of the pack finish behind Arrogate in the Travers. If he was not quite ready for the best of the best that afternoon, he was close.

The coming out party for Connect came in the $1.25 million Pennsylvania Derby. In a field that should cement its upgrading to Grade 1 status next year, the large field came down to two horses in the final sixteenth of a mile. Despite the wide trip, it looked like the classy and experienced Gun Runner was going to run right on by for the important victory. Instead, it was Connect, making only his sixth career start, who fought back on the inside to earn the victory. Considering what they have done since, it is quite clear that this Pennsylvania Derby was anything but a fluke for the top two.

Gun Runner should be commended as the lone three-year-old to dance every dance and maintain his top level of racing throughout the year. He may have failed to win in many of his biggest tests of the year, but he always ran well. He also collected four stakes wins in 2016, none of which were bigger than last Friday’s victory in the Clark Handicap. The Grade 1 win was his first, and obviously very well deserved. It also came just one day before Connect connected in a big way. His victory in the Grade 1 Cigar Mile over a determined and talented older horse in Divining Rod was as brave as they come.

Better news yet, about these new stars, is while the Triple Crown trio have all been retired to stud, the best of this crop in the second half of the season all look to be primed and ready to make their presence felt as older horses. Throw in some other talented sophomores, such as American Freedom, and it would seem like the handicap division will be in very good hands after the retirement of California Chrome.