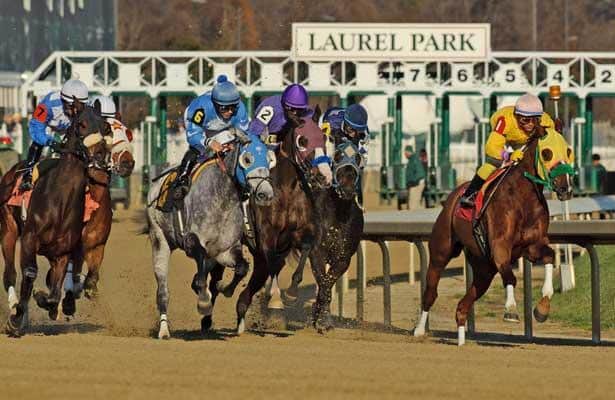 If you were unfamiliar with the Mid-Atlantic sprinting mare, Lady Sabelia, before today, it is now time to recognize. She just keeps getting better and better, and evidence of that was on full display today for all to see. Making her graded-stakes debut in the $300,000, Grade 2 Barbara Fritchie Handicap at Laurel Park, Lady Sabelia took the race to her competition early and often in route to a convincing 1 ½-length score.

Sent off as the 5-2 co-second choice, the five-year-old daughter of Majestic Warrior was allowed to take advantage of her good early speed from her outside post position by her regular rider, Horacio Karamanos. A sharp winner over this track in both the Willa On the Move and the What a Summer in her last two starts, Lady Sabelia cleared the field down the backstretch through lively early splits of :22.67 and :45.61.

The other two favorites in the race, Princess Violet, invading from New York, and Sam’s Sister, coming from California, both made their presence felt as the field approached the stretch run of the seven furlong affair, but Karamanos still had plenty of horse left in Lady Sabelia as the field of ten came spinning out of the far turn.

Sure enough, Lady Sabelia kept running hard down the lane, and Princess Violet proved the only one within shouting distance, but could only chase in vain, as the Mrs. Frank P. Wright homebred maintained a working advantage all the way to the wire. A length farther back, 65-1 shot Expression, passed a hanging Sam’s Sister to gain third place over the race favorite.

Winning trainer, Robin Graham was understandably proud of her stable star after the race. “She is cool and relaxed about everything. Whatever you ask her to do she does,” said Graham. “This one is good for the home team. We haven't thought past today. We wanted to see where this goes.  I will consider taking her to bigger things. I don’t give Horacio a lot of instructions. He knows not to get into a fight with her.”

It was the sixth victory in the last seven starts for Lady Sabelia, and her fifth lifetime stakes win. Before this afternoon she had done most of her damage at six furlongs, but today’s big Fritchie victory raised her career record at seven-eighths to 2-for-2, having previously scored in her stakes debut in the seven-furlong $100,000 Safely Kept in November of 2013, also at Laurel Park.

Lady Sabelia rewarded her backers with a $7.20 return for a two dollar win bet, and covered the seven furlongs in 1:23.14. Today’s victory, the richest of her career, raised her lifetime record to an impressive 14-8-2-3, and pushed his lifetime earnings over the half million dollar mark.