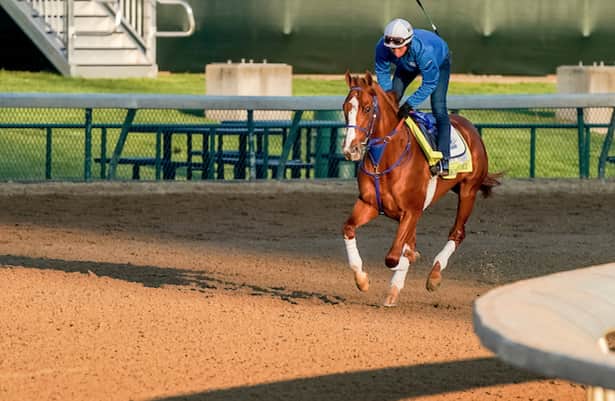 Sometimes all we need is a little bit of confidence. This is true for horses too. After a tough summer, King Fury demonstrated why he is still a horse with big potential with an overpowering victory in the inaugural running of the $275,000 Bourbon Trail Saturday at Churchill Downs.

In so doing, the Kentucky-bred son of Curlin, out of the Grade 1 winning Flatter mare Taris, should have regained any confidence lost after two non-threatening performances at Saratoga. I’ve seen many a good horse over the years go sour after being thrown to the wolves too often. It appears the handsome chestnut will not be one of them.

[What's next for King Fury after 'awesome' Churchill win?]

Purchased for $950,000 at the 2019 Fasig-Tipton New York Saratoga Select Yearling Sale, King Fury always had the look of a good one. A debut winner at Churchill Downs last September, he became a stakes winner at the same track two starts later with a win in the Street Sense Stakes.

The developing colt was not one of the best 2-year-olds in the nation, though, and was beaten in his final two starts as a juvenile. Not making it back to the races until April, The Kenny McPeek-trained runner showed that the time away had really done him some good.

His win in the Lexington (G3) at Keeneland in his 2021 debut was good enough for his connections to enter him in the Kentucky Derby three weeks later. His team always has shown confidence in their colt and many, including myself, believed that he was a live long shot in the Run for the Roses.

Alas, it was not meant to be. King Fury spiked a fever and was scratched out of America’s most prestigious horse race. Briefly considered for the Preakness, it was decided that the promising sophomore needed some time.

Reappearing in the Ohio Derby (G3) in June, I thought King Fury was best as the fourth choice in a solid field assembled for the $500,000 race. Down on the inside early, he was angled out and rallied strongly between horses to get up for second. A half-length short of catching Masqueparade at the wire, and ahead of Keepmeinmind, it was a race he easily could have won.

Owned by Fern Circle Stables and Three Chimney Farms, it was once again time to shoot King Fury for the stars. The big summertime goal would be the Mid-Summer Derby, and his connections wanted one more good prep for the $1.25 million Travers (G1).

He probably would have run in Saratoga’s Jim Dandy (G2) as a logical tune-up for the big one, but a barn quarantine ruled that out. Instead he tried turf for the first time in the $1 million Saratoga Derby (G1).

It was out-of-the-box thinking that could have paid off, but it didn’t. Drawn to the far outside in the deep field, King Fury was not ready for that kind of race in his turf debut, and he was beaten by more than eight lengths.

Undeterred from that difficult assignment, his connections stuck to the plan and ran him back in the Travers three weeks later. In a paceless race, King Fury was last early and could never gain any real ground on Midnight Bourbon and Essential Quality as they sprinted home in a spirited stretch duel.

In his first big test on dirt this year, King Fury could do no better than fifth. His summer at Saratoga had been a big disappointment. Against tough fields, he was not able to get the job done. Nor had either race set up well for him.

Faced with perhaps a turning point in his career, he could have chased more riches in a race like the $1 million Pennsylvania Derby (G1), but instead his connections made what I believe was a very wise move by lessening the chance for creating a discouraged horse.

The first edition of the Bourbon Trail was only a listed stake, but it offered several advantages to King Fury. The $275,000 purse was attractive, as was the distance of 1 3/16 miles over a Churchill Downs main track that we know he appreciates. More than anything, though, it offered class relief at a point in his career where it might have been needed.

The result was electrifying. Showing that he still has Grade 1 potential, King Fury thrived in the opportunity.

Ridden by the familiar Brian Hernandez Jr., the race favorite rated in sixth behind a decent early pace. Never falling too far back, he worked his way through an opening and posed an ominous presence on the outside. From there he quickly took over and romped home the easiest kind of winner.

The field was nothing to write home about, but it wasn’t exactly cheap either. King Fury did what very good horses are supposed to do, and then some. The 13-length romp was only .04 seconds off Idol’s 2020 track record and was completed in style. His trainer was clearly pleased with the performance.

“He was really impressive today,” McPeek said. “We’re very proud of how he ran. He’s a really talented horse and showed that today.”

With four wins, three of them stakes, in 10 career starts, King Fury once again is a horse with a world of potential. Saratoga did not work out, but his connections made a great call with a confidence builder Saturday at Churchill Downs.

With only a Grade 3 and two listed stakes in his victory column, he still needs to prove he can beat the big boys. Where he goes from here remains to be seen, but I, for one, still very much believe that King Fury has big things in his future.