Ky. Derby or turf for Fountain of Youth-bound Fire at Will? 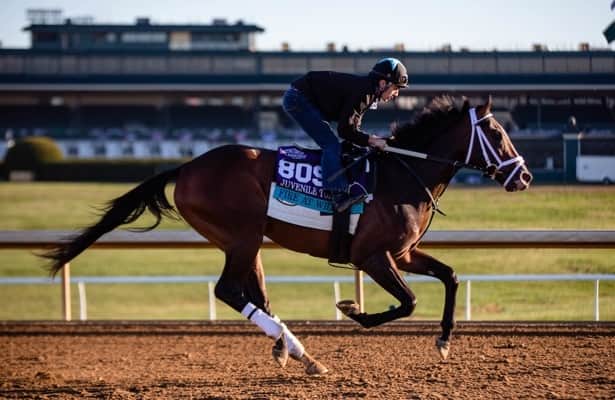 With a determined and decisive victory in last fall’s Breeders’ Cup Juvenile Turf, Fire at Will proved himself the top 2-year-old grass horse in America. This year, he’s after an even bigger prize.

Although there is plenty of turf in his pedigree, Fire at Will might be more than a turf horse. With that in mind, his connections are thinking what all connections of top young 3-year-olds think about — the Kentucky Derby.

His path to the first Saturday in May, and a shot at immortality, will begin on Saturday when he goes to the post in the Fountain of Youth Stakes (G2) at Gulfstream Park. It is not the first big dirt race considered for Fire at Will.

Owned by Three Diamonds Farm and trained by Mike Maker, Fire At Will came to the Breeders’ Cup as a possibility for both the Breeders’ Cup Juvenile and the Juvenile Turf. In fact, his trainer seemed to want to run in the richer race on the dirt. But the choice was made to run on the grass, and it turned out to be a very good decision.

The son of Declaration of War unleashed a powerful stretch move to pull off an 30/1 upset in the most important grass race for juveniles. Sitting in a close stalking position, while saving ground on the rail in third behind the early speed of Outadore, Fire at Will was content to wait for the real running to begin.

Turning for home, he set his sights on a game Outadore. He tipped off the rail and soon collared the early leader before powering by at the 1/8 pole. Fire at Will won going away in racehorse time of 1:35.81 for the mile.

With 3-of-4 lifetime record, Fire at Will already is a three-time stakes winner, and one of those wins came on the dirt — or at least the slop. Before winning the Pilgrim Stakes (G2) on the turf and then the Breeders’ Cup Juvenile Turf, he won the off-the-turf With Anticipation Stakes at Saratoga as a maiden.

With versatility, good tactical speed, proven class and the bloodlines to handle classic distances (he’s out of a Kitten’s Joy mare), it would seem only natural that his connections would think Kentucky Derby. The fact that his experienced trainer thought strongly about running him on the dirt in the Breeders’ Cup Juvenile only adds fuel to the fire.

In the Fountain of Youth, though, they’ve chosen no easy haven to test his affinity for the main track. In his 3-year-old debut, he will face a tough field of proven dirt horses, led by the impressive winner of the Holy Bull Stakes (G3) last month, Greatest Honour.

Still, you have to give Fire at Will a shot on Saturday. In his three straight stakes wins, he has silenced the doubters each time, winning at increasingly higher odds. He has had a series of workouts over the dirt at Gulfstream Park, most recently a five-furlong breeze on Saturday, and is “ready to go,” according to his trainer.

Kendrick Carmouche will ride Fire at Will for the second time on Saturday. He also was aboard when the pair took home a 2-length win in the Pilgrim in October at Belmont Park.

Now is the time to test the waters to see if you have a sophomore colt good enough to make a legitimate run at the Kentucky Derby. While his ultimate story on the main track has yet to be told, Fire at Will is one of the more interesting horses on this year’s trail.

Already a Breeders’ Cup winner on turf, perhaps he will prove to be every bit as good on the dirt. If not, he will be headed back to the grass, where we already know his future looks bright.

Royal Ascot roundup: Love wins to kick off 2021 campaign
Love was all heart when making all under jockey Ry...