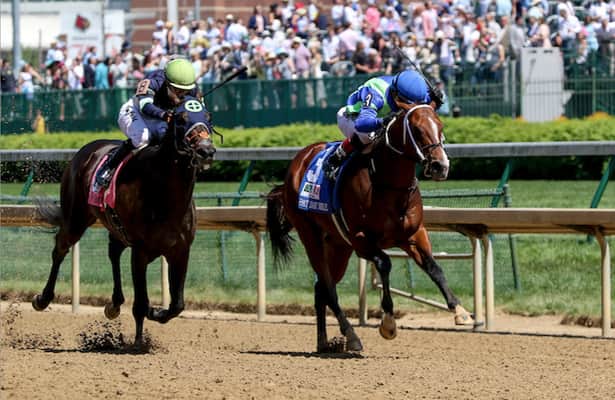 One of the best races on the Kentucky Derby card proved to be the matchup between Jackie’s Warrior and Dream Shake, as the pair of talented 3-year-olds battled down the lane in the Pat Day Mile (G2).

Five weeks later, we could be in store for a similar type of thriller as both are pointing for the Woody Stephens (G1) on the Belmont Stakes undercard.

Adding to the spice of the 7-furlong test are a few other very interesting horses that could make this one of the best races on a great day of racing scheduled for Saturday at Belmont Park.

Jackie’s Warrior rates top billing. The son of Maclean’s Music has been an absolute terror around one turn. After a pair of defeats while testing the waters at two turns against the champion juvenile Essential Quality, he looked quite at home transitioning back to one turn for a game and gutsy win in the Pat Day Mile.

Sent off as the 2-1 favorite, the four-time graded stakes winner was seemingly oblivious to the bruising early fractions at Churchill Downs and was resolute down the lane against a very talented challenger.

Off that impressive victory, Jackie’s Warrior assuredly will be favored once again as he faces another tough assignment in the Woody Stephens.

When last seen at Belmont Park, the Steve Asmussen-trained colt was a dominating winner of the Champagne Stakes last October. Overall, the speedy bay is 5-for-5 around one turn, including two easy Grade 1 scores.

While Jackie’s Warrior took home the victory and the accolades on Kentucky Derby day, do not overlook the quality of the race run by the runner-up. Dream Shake ran his eyeballs out to chase the favorite every step of the way before running out of real estate, a short head behind the winner.

Like the horse who nipped him under the twin spires, Dream Shake has known only graded stakes racing since winning impressively in his debut. Third in both the San Felipe (G2) and the Santa Anita Derby (G1), the Pat Day Mile was only his fourth lifetime race, and the son of Twirling Candy ran huge. Trained by Peter Eurton, he seemed to appreciate the cut back in distance to one turn last time.

One horse who could crash the party of the pair coming from Kentucky Derby day is Caddo River. A son of Hard Spun, he will make his first start since a solid performance in the Arkansas Derby (G1) in April, when he fought tooth and nail down the stretch to grab second over the favorite Concert Tour.

The speedy Brad Cox-trainee had to sit out the Kentucky Derby after spiking a fever, but he also could appreciate the cut back in distance. First or second in five out of six career starts, Caddo River parlayed a big win at Churchill Downs to close his juvenile season into a similarly romping win in the one-mile Smarty Jones Stakes at Oaklawn Park to begin his 3-year-old campaign.

While Jackie’s Warrior, Dream Shake and Caddo River all took two shots going two turns in hopes of being a legitimate Kentucky Derby horse, Drain the Clock stretched out only once, and that came when he succumbed to the rally of Greatest Honour in the Fountain of Youth (G2).

Sprinting has been a different story for the Saffie Joseph Jr.-trained colt. If not for losing his rider in his third career start, Drain the Clock would likely be perfect at 7 furlongs or less. Since the mishap, he has won three sprint stakes in impressive fashion, with only the Fountain of Youth second-place finish interrupting the winning streak. Most recently, he scored a facile victory in the seven-furlong Bay Shore (G3) at Aqueduct.

Although the winner of Saturday’s Woody Stephens likely will come from one of the four horses already discussed, all their speed could set the table for someone to come from well back early.

Nova Rags, who is also unbeaten at seven furlongs or less, will look to come running late after a second-place finish last month in the 1/18-mile Peter Pan (G3) at Belmont Park. Trained by Hall of Famer Bill Mott, the son of Union Rags offers an interesting alternative to the top four choices.

Saturday will be headlined by the Belmont Stakes, with races such as the Met Mile (G1) getting secondary attention. But don’t sleep on the Woody Stephens a little earlier in the afternoon. It is shaping up to be a most interesting little race.