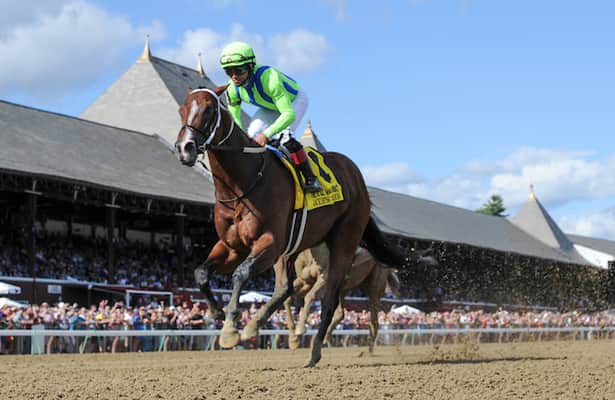 There were a pair of Grade 1 races for sprinters on each coast Saturday, and the winners Jackie’s Warrior and American Theorem have little in common. But they both look like serious contenders for the $2 million Breeders’ Cup Sprint (G1) on Nov. 5 at Keeneland.

Of course, we already knew that about Jackie’s Warrior. With jockey Joel Rosario doing his best impression of a statue, the 4-year-old son of Maclean’s Music made an absolute laughingstock of Saratoga’s Alfred G. Vanderbilt Handicap (G1).

The race highweight at 127 pounds, Jackie's Warrior was content to let the long shot Doc Amster briefly take the lead. But he but always looked in command in second as he waited to take over the 6-furlong affair.

When Rosario said go, the race was decided in an instant as the classy winner of 12 of 16 lifetime shot to the lead. The final margin of two lengths was downright silly as Jackie’s Warrior cantered down the entire stretch of Saratoga on his way to as easy a Grade 1 score as you will ever see.

Despite the recreational nature of the victory, he finished off the 6-furlongs in 1:09.74 over a track that had not been yielding fast times for weeks but looked to be finally quickening a bit Saturday.

His fifth career victory at the highest level also gave Jackie’s Warrior the honor of being the first horse to win a Grade 1 race at Saratoga in three consecutive seasons.

It was business as usual for the sprint champion of 2021, but American Theorem is a whole different story.

From the first crop of the 2015 Triple Crown hero American Pharoah, American Theorem was a much talked-about young colt out in California three years ago. A debut win at Del Mar was followed up by a runner-up finish in the American Pharoah Stakes (G1) at Santa Anita Park.

It seemed like he would be a horse to look out for on the 2020 Kentucky Derby trail, but it was not to be. He backed right out of the Rebel (G2) after dueling for the early lead in his third career start. Then he was not seen again at the races for 11 months.

When he returned from the long layoff for trainer George Papaprodromou, American Theorem ran a promising second in a fast allowance sprint but again was shelved for an extended layoff.

This time away for 9 1/2 months, he progressed his way into stakes company but showed little in three straight races at a route of ground, including a sixth-place finish in the 10-furlong Santa Anita Handicap (G1) in March.

A decision was made to cut him back to sprints, and so far, it has proven to be lightning in a bottle. Rallying from off the pace in the Triple Bend (G2) on May 29, American Theorem earned a hard-fought victory going seven furlongs at Santa Anita.

Fresh off his first graded stakes victory, he paired up again with veteran rider Joe Bravo Saturday in the 6-furlong Bing Crosby (G1) at Del Mar, and the result was eye-catching.

Wide throughout, the half-brother to three stakes winners was easy to keep any eye on as the only gray in the field. In mid-pack early, he began his move on the turn and took over the race with an impressive five-wide move. Turning for home, it was just a matter of the final margin as American Theorem sprinted away from the field.

With two straight graded stakes wins at two tracks since returning to sprinting, the rallying gray has finally found his niche. He’s also healthy and mature at the age 5 and looks like a horse who can take advantage if the early pace is too demanding.

That’s exactly what happened when the heavily favored Jackie’s Warrior was done in by severe early pressure while going 44 seconds for the half mile in last year’s Breeders’ Cup Sprint.

In fairness to the champion, we did find out soon after the race that he came out with a bone chip that required surgery.

Jackie’s Warrior has come back this year seemingly better than ever, with four straight wins to begin the season. He is the best sprinter in the land and has only a win in the Breeders’ Cup standing in his way from a truly sensational career.

It's a career that trainer Steve Asmussen says will have only two more starts before retirement. If Jackie’s Warrior wins the Forego (G1), a seven-furlong sprint at Saratoga on Travers Day, he once again will go to the Breeders’ Cup as a heavy favorite.

As great a sprinter as he is, it seems like a race he deserves to win, and he probably will. His biggest challenges, though, could come from a horse who, seemingly forgotten, has found new life sprinting.

In completely different ways, both American Theorem and Jackie’s Warrior looked very good Saturday and I look forward to seeing them at Keeneland for the Breeders' Cup Sprint three months from now.