It's been a meteoric rise for the late blooming Happy Saver 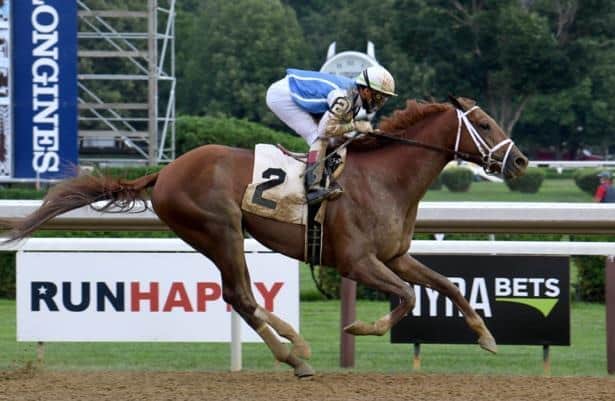 Four months ago Happy Saver was an unraced maiden in the barn of Todd Pletcher. Plenty has gone right for the son of Super Saver ever since.

On Saturday at Belmont Park the Wertheimer et Frere homebred tackled easily the biggest challenge of his burgeoning career, and in the Grade 1 Jockey Club Gold Cup, Happy Saver once again proved to be a horse rising up the ranks in meteoric fashion.

You seldom see done what the talented 3-year-old has been able to accomplish in such a short timeframe. Consider that he did not make his career debut until winning a seven-furlong maiden race on June 20 at Belmont Park. Three more wins and 16 weeks later, he won going a mile and a quarter in one of our nation’s most prestigious races for older horses.

Arrogate and Tiznow are two such horses from the past that readily come to mind. Each of them burst onto the scene and national prominence after not beginning their careers until well into their 3-year-old seasons, but Happy Saver even has a couple factors ahead of both of those champions.

Arrogate and Tiznow both began their racing careers two months earlier than Happy Saver in April and neither was still undefeated when they made their big breakthrough. Of course, we all know what heights they were able to rise to before their respective 3-year-old seasons were over and beyond, but for now it is interesting to compare Happy Saver’s current trajectory to those great late bloomers.

Each of Happy Saver's four races to this point have been decisive. In his first coming out party at Belmont Park, he demonstrated the ability to run fast. His 7 furlong time of 1:21 was racehorse time, but there are plenty of young horses who can run fast.

Next he graduated to 9 furlongs for his second test at Saratoga, and for a while it appeared that he was not going to live up to his very promising debut, as he just stayed in touch for a long time. His final furlong that afternoon in late July, though, was a thing of beauty, as he found another gear to come home an easy winner.

It was on to stakes company six weeks later in the listed Federico Tesio Stakes at Laurel Park. The horse on an easy pace in that one proved to be a stubborn foe, but Happy Saver kept pouring it on down the lane in the 9 furlong race to eventually put him away.

The Tesio to the Jockey Club Gold Cup is a big jump up in class, but in fact, taking on older horses for the first time at America’s classic distance while moving from a listed stakes winner to Grade 1 company proved to be no problem for the talented 3-year-old.

The final margin was only three-quarters of a length, but it was really just a matter of finding room on the rail. You could see how much horse rider Irad Ortiz, Jr. was sitting on just waiting for a hole. Once he did the decision was never really in doubt. Happy Saver’s ability to finish strongly was once again on full display.

Getting back to that comparison to great late bloomers of the past few decades, I see a little bit of Tiznow in Happy Saver. While Arrogate had a powerhouse dominance to him, the 3-year-old champion of 2000 was not one to blow his competition out of the water.

Just like Tiznow did it two decades ago, Happy Saver has the tactical speed to put himself into position early in races, and then that special trait of being able to find something extra in the final furlong. With so many horses these days unable to finish 10 furlongs strongly, it is a very good trait to possess.

Good enough to take on all comers in the Breeders’ Cup Classic on November 7 at Keeneland?

Possibly. I believe he would be a threat, but his connections have yet to make the decision on whether he will run in that one or not. Frankly it would be another big jump up in class.

Mystic Guide and Tacitus are good horses, but his competition in the Classic of horses like Improbable, Tom’s d’Etat, Maximum Security, Tiz the Law and Authentic are at another level.

The latter two currently sit atop the 3-year-old male division, and the Eclipse Award has looked like a two-horse race since they ran 1-2 in the Kentucky Derby, but now perhaps there is a new challenger.

A win by the undefeated Happy Saver in the Breeders’ Cup Classic might just be enough to wrestle the award away from the two division leaders.

For now, we will wait and see if his connections decide to take on the ultimate challenge with their new star and run Happy Saver against America’s best in next month’s Breeders’ Cup Classic.

The good news is that either way, they do plan on running the lightly raced colt next year at 4. For a horse who has begun his career so well, in only his first four months on the racetrack, that is a most inviting proposition.