It's been 50 years since Dr. Fager visited the Rock 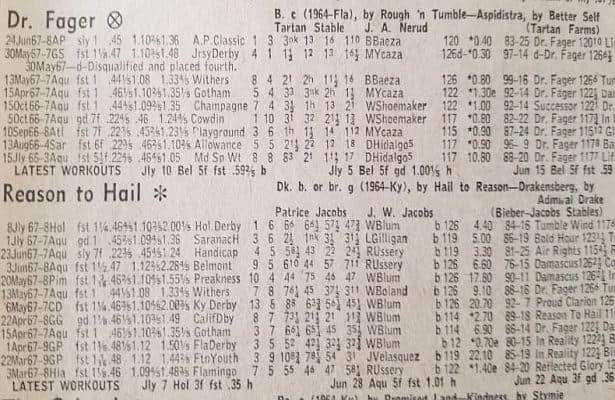 Bred to be a horse racing fanatic, I was raised on a steady diet of trips to the track. My teachers were great minds of the sport like Bill Quirin and my father. They were young PhD graduates and the leaders of a group who discussed and debated the sport at every opportunity. My older brother and I were their disciples, just as I imagine Plato had been to Socrates. Our classroom was any number of racetracks in the Northeast. Eyes and ears wide open, I learned more about the sport before I was ten, than most that filled the stands on any given Saturday. Sadly, I was born a few furlongs too late to have seen the one horse in which all my teachers could agree on. I was born in the sixties, but the retirement of the great Dr. Fager beat me out of the womb.

As good as the seventies were, and I maintain that it is the best decade of racing in American history, it was Dr. Fager that was the hero of the majority of my early lessons. From his wild flowing mane, to his incredible desire not to be passed by another horse; from his blazing speed, to his amazing weight carrying abilities; I heard far more stories from Dr. Fager in my childhood than from Dr. Seuss. In a way, the good doctor was both a legend, and a member of the family. That's why it's so hard to believe that it's been 50 years since he visited the Rock.

The Rock, of course was the old Rockingham Park in Salem, New Hampshire. A shining star when constructed back in 1906, the now defunct New England oval attracted Seabiscuit two years running back in the thirties. Still, it was a great surprise when trainer John Nerud decided to pass on more prestigious races to bring his star three-year-old up to New Hampshire.

On the same day that saw Damascus, the great rival of Dr. Fager, earn a hard-fought victory in the Dwyer Stakes, the explosive son of Rough'n Tumble thrilled racing fans at Rockingham Park by lining up against six rivals in the $85,400 Rockingham Special.

The trip to the New England oval was born out of respect that Nerud had for the head man and Rockingham, Lou Smith, who many years earlier had been kind to the young trainer. What better thank you, then to bring the recent ten-length winner of the Arlington Classic to the little track in New Hampshire.

So, on July 15, 1967, the great Dr Fager made his first of two starts at Rockingham Park. His confident trainer talked about his young star the morning of the race, as quoted in The Morning Telegraph ...

"When it comes to Dr. Fager, he is special," said Nerud. "He's a quarter of a mile the best horse I ever trained. And I had good ones like Gallant Man and Intentionally. He's by far the best. I knew it after he won his first race."

Only win betting was allowed in the race because of the ominous presence of Dr. Fager. Carrying 124 pounds, his main rival was expected to be Reason to Hail, a well-traveled son of Hail to Reason, who was good enough to have won the California Derby, and finish fourth in the Kentucky Derby a few months before, but he also had proven no match for the young doctor in earlier meetings.

The super talented Tartan Stable color-bearer was sent to the post as a 1-10 favorite in the field of seven, and would not be a disappointment to the New England racing fans. Under regular pilot, Braulio Baeza, Dr. Fager cruised around the track, beating Reason to Hail by more than four lengths in track record time.

Dr. Fager's next start would come seven weeks later, and also be at Rockingham Park, as Nerud wanted to test the ten-furlong waters in the New Hampshire Sweepstakes. That time he defeated a stubborn In Reality, proving to his trainer that ten furlongs was no problem for the speedy colt.

From there, he went on to bigger and better things, starting with the next race, which was billed as the race of the century against Damascus, Buckpasser, and a pair of rabbits in the Woodward. The following year of 1968, he enjoyed perhaps the greatest season of any American thoroughbred.

The main players are gone now, but the memories, and the stories live on. In the summer of '67, it was all about the Rock for the great Dr. Fager.

~References include: The Morning Telegraph, Dr. Fager by Steve Haskin, and the Chicago Tribune.