It's Official: Gourmet Dinner Off The Derby Trail 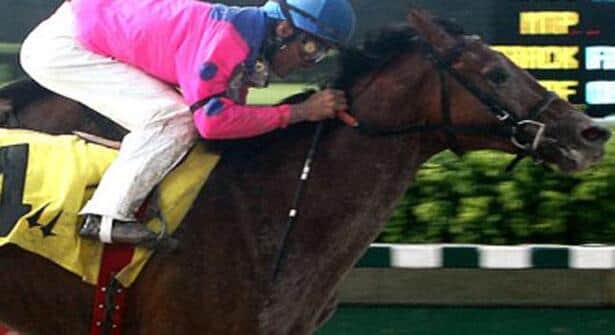 The mystery is over … Gourmet Dinner is officially off the Triple Crown trail due to a sore shin that developed soon after his last race, a strong second place finish in the February 26 Fountain of Youth Stakes.

In speaking with trainer Steve Standridge today, I learned of the minor injury which was discovered eight days after the Fountain of Youth.

“We probably could have nursed him up to the Florida Derby, but that was not the right thing to do for the horse,” said Standridge.

No timetable has been set for his return, but fans will be happy to know that the son of Trippi is doing well and has been walking for about a month back in Ocala. He is set to begin jogging again sometime in mid-April.

Standridge elaborated on his immediate future, “We have no specific plans for his return. He’s been good to us, and we’ll let him tell us when he is ready to come back.”

It’s nice to see connections of a quality horse not push their horse to participate in the Kentucky Derby. And make no mistake; Gourmet Dinner is a quality horse.

Gourmet Dinner had become one of the most popular horses on the 2011 Kentucky Derby trail for good reason. The $40,000 purchase from the OBS Two-year-olds in training sale of last April raced his way to become one of the leading earners of graded stakes money. In fact, despite his recent inactivity, he still would hold down the 2nd spot on the graded earning’s list if he was pointing for Louisville.

After beginning his career with three consecutive wins at Calder, Gourmet Dinner tasted his first taste of defeat when he finished 2nd in the rich In Reality division of Calder’s Florida Stallion series. He thus was ignored at 20-1 when he shipped out of town for the first time and ran in Delta Down’s $1 million Jackpot. The result was an impressive and decisive 2 ½ length victory. Not resting on those laurels, the Our Sugar Bear Stable owned colt was soon shipped to California, where he had the worst finish of his career, a 4th place finish in Hollywood’s CashCall Futurity.

A return to Florida this year saw a return to top form as Gourmet Dinner clashed with top company to finish a solid 3rd in the Holy Bull Stakes, defeating Mucho Macho Man in the process, before his excellent rallying effort to Soldat in the Fountain of Youth, where he finished well ahead of To Honor and Serve.

A hard knocking horse that fires every time is what Gourmet Dinner proved to be in his first eight races. Hopefully with a little R & R he comes back as good, if not better than ever.

Division Rankings: Little suspense left in Eclipse races
With a little over three weeks left in the 2022 ra...
x