It’s back to business for Mucho Macho Man 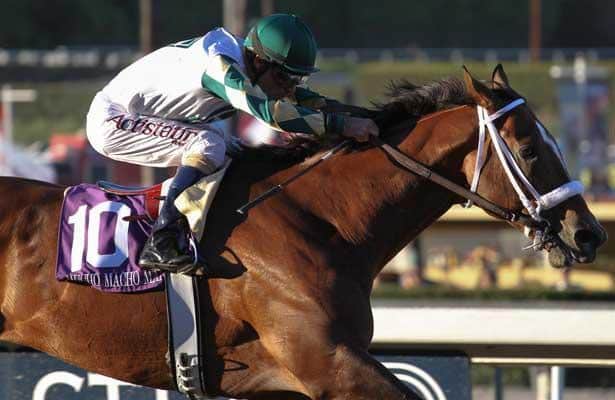 Any rest and relaxation period for Mucho Macho Man, after a successful trip to Santa Anita, is now officially over. The Breeders' Cup Classic champion and his connections have embarked on an action packed two weeks that will not only mean a lot to the star horse’s future, but also his legacy. Let’s take a quick look at the schedule for the fan favorite.

January 4 - Signalling his readiness to get a new season underway, the now six-year-old son of Macho Uno turned in a strong half mile work on Saturday. With his regular exercise rider Nick Petro Jr. in the irons, Mucho Macho Man threw down a solid four furlongs in :47.77 over the Gulfstream Park main track, galloping out five furlongs in 1:00.60. Under the watchful eye of trainer, Kathy Ritvo, it was the kind of move that gives hope that the big bay has not lost a step for season number five on the track.

January 8 - With the announcement of the 2013 Eclipse Award finalists, fans and connections of Mucho Macho Man received exactly what they were hoping. When last seen in competition, the Reeves Thoroughbred Racing runner broke through with the biggest victory in his career, taking the $5 million Classic by a nose over Will Take Charge. Not only was it sweet redemption after falling just short to Fort Larned in the 2012 edition, but it also prompted voters to make him one of the three finalists for both the Older Male award and Horse of the Year.

January 11 - Recently named the 2013 Secretariat Vox Populi Award winner, as the horse who best combined fan popularity and racing excellence, Mucho Macho Man will afford his connections the opportunity to celebrate on both coasts. In a wonderful display of cooperation by two of America’s top racetracks, owners, Dean and Patti Reeves, and rider, Gary Stevens, will be at Santa Anita to accept the trophy at the site of his greatest triumph. Back in Florida, Ritvo and Mucho Macho Man will be also be celebrated at a simultaneous presentation at Gulfstream Park. The connections will be available at their respective locations to meet fans and sign autographs, and the whole thing will be shown live on HRTV.

January 18 - The $400,000 Sunshine Millions Classic at Gulfstream Park will be the host to Mucho Macho Man’s seasonal debut for the third consecutive year. The team had considered waiting for the Donn, but their star is giving every indication that he is ready to go now. In the Sunshine Millions, Mucho Macho Man will try to duplicate his rousing victory over Ron the Greek in the 2012 edition, as well as, put to rest the memory of last year when he was pulled up after not handling the sloppy track conditions. A workout is one thing, but seeing the big horse in competition again is what everyone wants to see.

And later that evening … His connections will find out if Mucho Macho Man is awarded with an Eclipse Award, or even the highest honor of Horse of the Year. An earner $5,340,410, with eight wins in 23 career starts, Mucho Macho Man has been a top performer since his juvenile season. Whether or not he takes home the hardware next Saturday evening at Gulfstream Park, he is a fantastic representative of American racing at its best. To Dean and Patti Reeves, Kathy Ritvo, Gary Stevens, and the rest of the Mucho Macho Man team, I say best of luck, enjoy an exciting week, and most importantly, thank you for bringing him back for one more year of racing for us all to enjoy.