Is Neolithic of Grade 1 Quality? 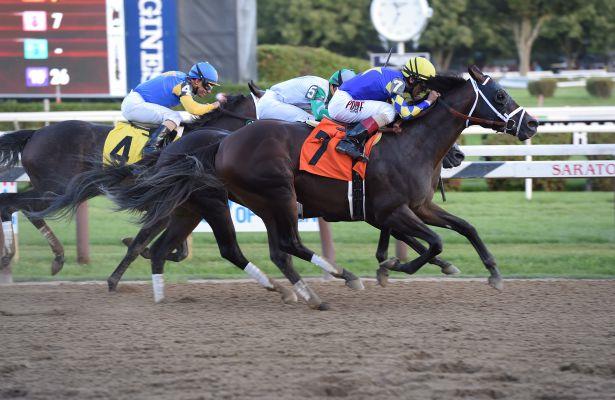 Lost in the aftermath of the scintillating run by Gun Runner, horseshoe and all, in the $1.2 million Whitney, was the return of one of the top older males in the country. But can you really call a horse who has yet to win a single stakes race, one of the best in the nation? When it comes to Neolithic, it is a legitimate question.

Saturday's closing race at Saratoga, a seven-furlong allowance/optional claimer, seemed mild enough, as written in the condition book, but when the name of one of the biggest earners of 2017 appeared on the entry list, the card closer on Whitney Day suddenly became of greater importance.

Away from the races since a third-place finish, behind the top two dirt horses in the world, in the Dubai World Cup, the Todd Pletcher-trained Neolithic had overcome a respiratory illness to get here. In the race on Saturday, he needed to overcome a pesky front runner, and a wide trip to make it to the winner's circle for the first time since late last year.

It was certainly not the visually impressive performance of what Gun Runner came up with a few races earlier, but on the other hand, it was probably everything his connections could have hoped for.

"I thought he ran well," Pletcher said. "He had a little freshening at WinStar and got a little sick when he first came back, so we had a tight schedule to get to that. I think he overcame a less-than-ideal schedule and not his preferred distance, but I was proud of him for putting in that kind of run."

Uncorking a strong late rally, Neolithic came from well back, under John Velazquez, to rush to the lead in the closing stages. It was a gritty and promising return performance, and it was a good, hard sprint. The victory, by a neck over Warrior's Club, should set him up perfectly for a late-summer/fall campaign against the big boys.

Testing 'the big boys' looks like it will come in his next race, as the Starlight Racing and Qatar Racing owned colt is now pointing for the Grade 1 Woodward on September 2 at Saratoga. It is the same race which is penciled in for the Whitney hero. Can we really expect this non-stakes winner to threaten a horse like Gun Runner?

It's impossible to know for sure, but that is one of the things that makes the four-year-old son of Harlan's Holiday so interesting.

Neolithic's effort in the ten-furlong Dubai World Cup, where he finished 3rd-of-14, and just over seven lengths behind Arrogate and five lengths behind Gun Runner, was further evidence of what had had been brewing in South Florida.

A late bloomer, Neolithic closed out his sophomore campaign with an eye-catching nine-length romp in an allowance race at Gulfstream Park.

Off that one, his connections gave him a shot in the world's richest race. The $12 million Pegasus World Cup became a bit of a coming out party for the $460,000 yearling purchase. A solid third-place finish there, behind Arrogate, was then verified in Dubai.

So here we are now, back from Dubai, over the illness, and ready to jump back into the deep end of the pool "He kind of got pushed out a little bit but showed some real determination," added Pletcher. "We're going to move forward from that race and run a mile and an eighth, which is more in his wheelhouse. Gun Runner is very good, so we'll do the best we can."

With a career record of 10-3-3-2, but already over $2.1 million in the bank, we still really do not know just how good Neolithic is, or can be. While it's true that he has never won a stakes race -- his only other try was a second-place in the Grade 3 Discovery Stakes last fall -- He has proven that he does at least belong in the conversation of top older males.

The Woodward will be a big step, but just step two in a new march that could include runs in the Breeders' Cup and next year's Pegasus World Cup.