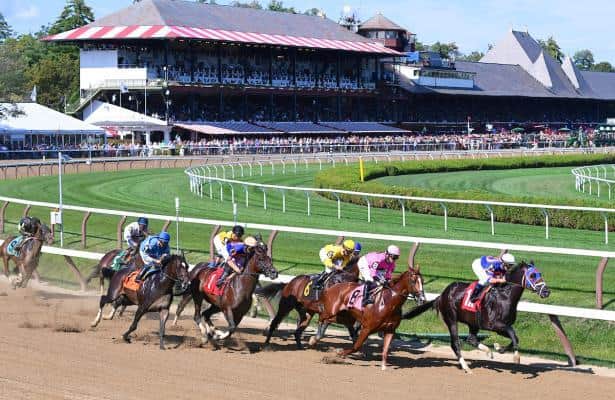 Can a horse from a small track in mid-America, who has never raced beyond 8 1/2 furlongs and is coming out of a restricted race, really be expected to compete with the best 3-year-olds in the nation?

We will find out when Ain't Life Grand lines up on Saturday to take on a star-studded field in the Grade 1, $1.25 million Travers Stakes.

With a home base of Prairie Meadows Racetrack in Altoona, Iowa, it goes without saying that the Kelly Von Hemel-trained Iowa-bred will not be your typical entrant in the mid-summer derby.

When last competing, the son of Not This Time showed his superiority in a race called the Iowa Stallion Stakes. Sent off at odds of 1-20, his closing kick overpowered early leader Rowdy Rascal on his way to a seven-length romp in the restricted $90,720 stakes race at Prairie Meadows.

But we’re not in Altoona anymore.

The names Rowdy Rascal and Late for Lunch will be replaced by heavy hitters: Epicenter, Charge It, Zandon, Cyberknife, Early Voting, Artorious and Rich Strike. Running in the Travers represents a daunting move up in class, to say the least.

Ain’t Life Grand is not your average Iowa-bred, though. A homebred for Ray and Peggy Shattuck's RPM Thoroughbreds, he proved that two starts back. Only two weeks before the Iowa Stallion, he closed with a good-looking late rush to get to the wire first over the talented Conagher in the $300,000 Iowa Derby.

The Iowa Derby winner also does not have the pedigree of a typical Iowa-bred. Sired by one of the top young stallions in the nation, Not This Time, he is out of a well-bred Medaglia d’Oro mare named Cat d’Oro.

A promising 2-year-old last year with a pair of stakes victories from four starts, Ain’t Love Grand has ventured outside of Prairie Meadows only once in his eight-race career.

Although a fourth-place finish in the Bachelor Stakes at Oaklawn Park is not pleasing to the eye on paper, it should be noted that facing fast horses going six furlongs off a seven-month layoff was more of a tightener rather than a race that needed to be won by the late runner.

In fact, his connections always believed that a distance of ground would be best for Ain’t Life Grand.

There aren’t any classic distance races at Prairie Meadows to prove that point, so the Travers becomes his first test at a distance they believe will be to his liking. The way he has been finishing off races of late, you can see why they think he can successfully go further than he ever has before.

Well liked early on, he was not pushed to try to make the Triple Crown series. But as good as he is going right now, the temptation became too much to deny, so the upstart from the Hawkeye State boarded a plane bound for the horse racing cauldron that is Saratoga.

Ain't Life Grand has made an impression since arriving at the Spa on Aug. 7. His first work on Aug. 13 was a good-looking four-furlong breeze in 48.23 seconds over the Saratoga main track. He then turned up the heat one week later, sizzling a half mile in 45.88 seconds in his final work before the Travers.

In hopes of having the best chance in the big race, Saratoga regular Tyler Gaffalione will pick up the mount after the dark bay was ridden by Elvin Gonzalez in all of his first eight starts.

As for his barn, Kelly Von Hemel might not be a household name on the big stage, but he’s been around plenty of good horses over four decades as a trainer. He comes from a racing family, and among his several graded-stakes winners over the years was the top race mare Miss Macy Sue.

Ain’t Life Grand has the potential to be the best one yet for Von Hemel, as well as for owner Ray Shattuck.

Despite the certainty of his position as a big long shot on Saturday, his connections believe that their horse has earned a shot, and in a year that already has produced the likes of 80-1 shot Rich Strike winning the Kentucky Derby, who can blame them?

What do you do when you have the best horse you've ever owned and he’s going really well? You ship him to the eye of American summertime racing for what easily could be called the race of the year to this point, that's what.

The odds will be stacked against Ain’t Life Grand on Saturday in the Travers, but I commend his connections for taking a shot with their very good horse. Isn’t that what horse racing should be all about?