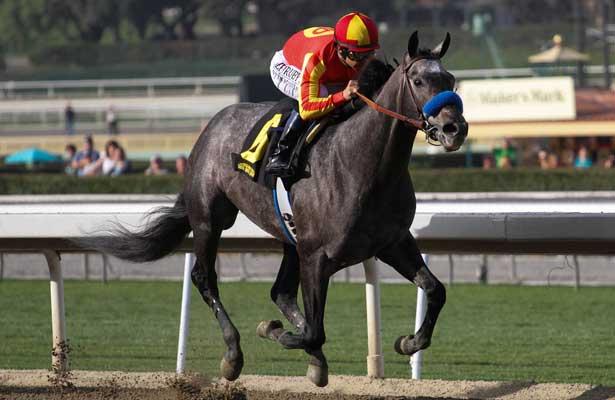 Preakness Prep? Probably; four weeks out is the perfect spot on the calendar to birth a Middle Jewel new shooter.

Highlight of the Hawthorne Race Course stakes schedule? Definitely. Kentucky Derby prep or not, the $500,000 Illinois Derby remains the state’s preeminent race on the main track for America's glamour division. Without further ado, let’s take a look at tomorrow’s field.

Midnight Hawk - From the Bob Baffert barn, the speedy son of Midnight Lute comes to Chicago sporting a big class edge. He has performed well in four consecutive graded stakes out West, including a victory in the Grade 3 Sham, and a second place finish, albeit a well beaten one, to the Kentucky Derby favorite California Chrome in the Grade 2 San Felipe.  Owned by an interesting cast of characters, including Chicago Blackhawks Head Coach Joel Quenneville, and former Chicago Bears Offensive Coordinator Mike Tice, the colt will be a deserving heavy favorite, and in my estimation, stands out as strictly the one to beat.

King Cyrus - If anyone can knock off Midnight Hawk, this would be the one with the best chance. Owned by WinStar Farm, and trained by Todd Pletcher, the lightly raced son of Bellamy Road broke his maiden at Saratoga last summer like a good thing. He has not connected since in four starts, but ran a good second to start the season before a seventh place finish in the Louisiana Derby. I’m expecting improvement tomorrow in his third race back, and getting blinkers for the first time. The popular Rosie Napravnik picks up the mount.

Class Leader - The hottest horse in the field comes in off two straight wins for Lanes End Racing and trainer, Neil Howard. Whether those non-stakes wins at Fair Grounds will translate well to the tougher competition tomorrow remains the question. He does possess the tactical speed to stay in touch early, and is bred to develop with age. I like the top two better, but he could be an up and comer.

A Step Ahead - Best known as the full brother to the local favorite, Giant Oak, this well-bred chestnut is only 1-of-7 lifetime, but his best finishes came over this track last  year. The late runner has run into some bad luck in recent places, so a return to the friendly confines might be just the tonic to change his luck. Look for him to be passing the tiring horses in the stretch, but he’s more likely to fill the tri or super, than to get the win.

Dynamic Impact - The well intended son of Tiznow finally got off the hump, breaking his maiden last time in his fifth start. Having said, the horse that he beat in that race is a useful sort. Breaking from the rail in the Illinois Derby, he’ll need to be involved from the get-go, and coming from the maiden ranks, a win might be a little much to hope for, but his trainer, Mark Casse has been winning in bunches of late.

Global Strike - The second from the Pletcher barn, this Stonestreet runner was solid in consecutive races at Gulfstream this winter, with a second to the good Tonalist, before coming back to break his maiden next out. He had no answers for Chitu and Midnight Hawk when sent to Sunland Park for their Derby, though. He likely is better than that performance, but improving some 20 lengths to compete with the top one seems like an unlikely turnaround.

Emmett Park - He looked interesting while beginning his career with a pair of late running wins on the Polytrack at Turfway Park. Unfortunately, the son of Bob and John showed nothing in his next try, his first on dirt, in the Risen Star. Like the one directly above, he could well be better than his last, but hoping for a complete reversal might be wishful thinking.