I'll take my eyes over your numbers every time 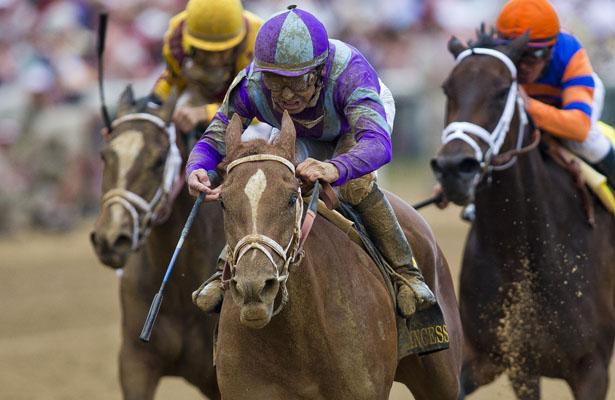 An industry person recently tried to compare favorably the running ability of A.P. Indy versus his daddy, Seattle Slew, by saying that the son “had better numbers” than his sire.

Our brief conversation took place online, so the other person could not see my reaction. I laughed, and then I shook my head with a mixed feeling of sadness and disbelief. His comment ended our brief debate, for I believed anything further would be less desirable than sticking my forehead under a dripping faucet for the rest of the morning.

With all due respect to A.P Indy, who was a fine racehorse, and then went on to be an outstanding sire, but he was in no way, shape, or form, the runner that his father was. If you disagree with that fundamental statement, you should probably stop reading right now.

Perhaps the exchange should have not struck a nerve with me, as I know the other person to be younger than me, and therefore did not have the opportunity to see both horses run in person as I did, but still, I found it downright disrespectful to say this about one of the sport’s all-time greats, especially considering that the comment came from a respected voice in the industry.

Forgetting about how completely silly I feel the above comparison is, I see it as an example of a troublesome trend that only seems to be getting worse in the handicapping or the comparing of horses.

The figures guys loved Ghostzapper, Invasor not so much. Who was better? I'm not sure, but I do know that there was a whole lot more to Invasor than a lone, solitary number given to him after any one of his victories. I fear that speed figures are stripping the judge for yourself know-how away from a vast majority of new generations of race fans.

For a more recent example, Princess of Sylmar was let go at odds of 38-1 before winning this year’s Kentucky Oaks. Why? Speed figures. The numbers guys said she was too slow to beat the likes of Dreaming of Julia, Beholder, and Unlimited Budget. Surely her first-first-second in three New York stakes coming into the Oaks should have earned her some respect. Apparently not.

I won’t bore you with my score on her at Churchill Downs, but I will say that I watched the races of all the Oaks fillies leading up to the race, and luckily for me, the eyes don’t lie.

I could see with my own eyes that she not only belonged with these other fillies, but the Oaks represented a real advantageous dynamic for her running style. If I had listened to the speed figure gurus, I would have given her no shot, but instead I believed what I had seen for myself, and only used the numbers to get odds beyond my wildest dreams.

Now don’t get me wrong, there clearly is a place for mathematical representations of a horse’s performance within a race. In fact, I believe the work done by my friend, Dr. William Quirin, beginning in the 1970’s, was revolutionary. Quirin recognized the importance of pace within the race and how to to best predict the outcome by analyzing each horse’s propensity to run fast early, or not, and by representing this information through tangible numbers. His work came at a time when little serious crunching of numbers was done to help the average handicapper.

A lot has changed since then. I would call it a dumbing down of Quirin’s work. He didn’t aim to put a single number on a horse’s performance in a race. Quirin was smarter than that. He rather only attempted to apply a numerical value to what style of race the horse would run to help the handicapper decide what the dynamics of a race would likely look like.

Examples of Quirin’s work are still out there, and even advanced, but that is not what the vast majority of race goers see. They instead know that one final number. To use the most popular one out there; horse A has an average Beyer of 85 in his last three starts, while horse B only averaged an 80 in his last three starts. Handicapping or comparing of the two is over … horse A is clearly better. I find it laughable.

I know a lot of people have made a lot of money hawking their numbers, figs, speed ratings, but comparing only a single final number is nothing short of lazy handicapping. There is so much more to it. From understanding pace scenarios, to trip handicapping, to recognizing past patterns, the comparing of horse A to horse B, or the handicapping of a race is an intricate system that should be relished, rather than skipped.

Horses are so much more than a number on a sheet of paper or computer screen. That is what the numbers guys just don’t get, or maybe they do, and it is just the folks that rely so heavily on their numbers that are really missing out. Horses are living, breathing animals that possess a mind, a heart, and a soul. Seattle Slew had all three in spades. Anyone that saw him run knows what I am talking about

A.P. Indy better than Seattle Slew? It still makes me shake my head.