If you voted Zenyatta, you have to love Union Rags 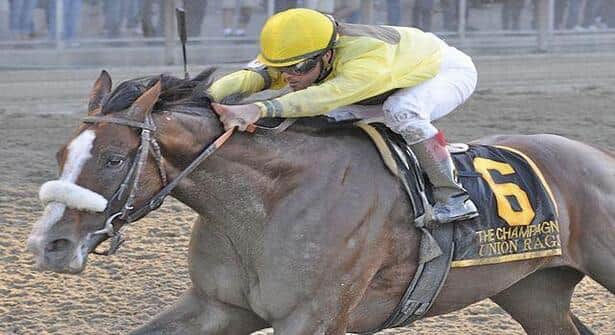 As you all know the 2010 Horse of the Year award went to Zenyatta in a narrow decision over Blame, despite having been beaten by him in the Breeders’ Cup Classic. For many, this decision was the correct one for a combination of reasons: Zenyatta was the leader of the Horse of the Year race going into the Classic, having once again dominated the older mare division in undefeated fashion. And secondly, Zenyatta was perceived to have run every bit as an impressive race in the Classic as Blame did - having had to come from so far back without the clearest of trips turning for home - if not better than the actual race winner. This scenario sounds like a carbon copy of the discussion for Champion Two-year-old male of 2011.

Union Rags was the unquestionable leader of the two-year-old male division before the colts were loaded into the Breeders’ Cup Juvenile starting gate. He was perfect in three starts, including impressive scores in the Grade 2 Saratoga Special and the Grade 1 Champagne Stakes. Meanwhile, like Blame, Hansen was one of the major contenders coming into the race, but with only romping wins in a maiden race, and the ungraded Kentucky Cup Juvenile, both at Turfway Park, he certainly had some ground to make up in the race for an Eclipse Award.

He may have made up that ground by scoring a front running victory on Saturday, but then again, maybe he didn’t. While Hansen carved out all the fractions, and relatively unbothered by company until the stretch run, Union Rags went wide on both turns from his outside post position, and then swerved in and out during the stretch before just missing his near white rival at the wire. Hansen won the race, but my friends at Trakus tell me that Union Rags ran 78 feet farther than Hansen did. That equates to approximately nine lengths. The final margin of victory was a head, the same margin that did in Zenyatta in last year’s Classic. Well that is, did her in for the race, but when the Horse of the Year winner was announced, it was Zenyatta who came out ahead.

Unless last year’s award was a lifetime achievement award, or a popularity contest, I ask you … What is the difference between voting Zenyatta over Blame last year and selecting Union Rags over Hansen this year?