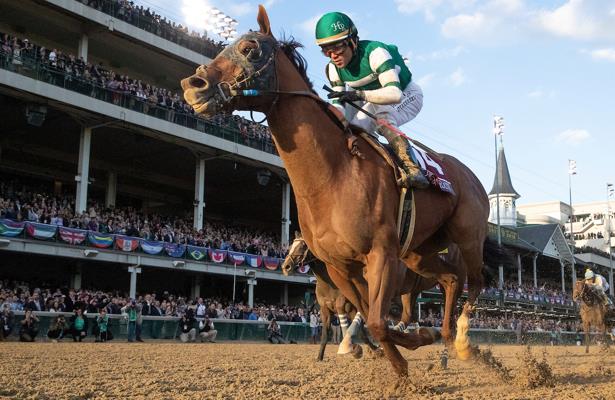 For the third consecutive January, America's best older dirt horse from the year before will step into the starting gate for a final time in the Pegasus World Cup.

Two years ago, California Chrome did not fire in the inaugural edition and finished a well-beaten ninth behind Arrogate. Last year, Gun Runner took to the Gulfstream Park main track like a champion should, running away from his competition. This time around, it's Accelerate who will be asked to get the job done one more time in the nation's richest race.

While California Chrome had cemented his place in racing history well before the Pegasus, Accelerate has more in common with last year's winner. The now 6-year-old son of Lookin At Lucky was a good horse at ages 3 and 4, but a cut below the best of his generation. That all changed in 2018, when he powered his way to victory in five Grade 1 stakes races. It was quite similar to what Gun Runner had done in 2017, dominating his way to and through the Breeders' Cup Classic after looking nice, but not quite the best the previous two seasons.

Still, Gun Runner seems to have a fair share more respect than has been given thus far to Accelerate.

That's fair enough, as most would rate the winner of 12-of-19 as a better racehorse than Accelerate. Most would also say that the 2017 Horse of the Year faced better competition than has the pending Pegasus favorite. The question then begs: What can Accelerate do to finally earn some respect?

What Accelerate does or doesn't do in the Jan. 26 Pegasus will go a long way in defining his legacy. Fair or not, that's where Accelerate is in the hearts and minds of many a racing fan.

With a quick look at his racing statistics, it's easy to see that Accelerate has put together an enviable racing career. Lacking the overall notoriety and excellence of the likes of California Chrome and Gun Runner, the Hronis Racing-owned and John Sadler-trained runner has compiled a career mark of 10-5-5 in 22 starts with just a shade under $5.8 million in the bank. His only two finishes out of the money came in the second race of his life, when he finished fourth, and then an uncharacteristically bad performance in the 2017 Breeders' Cup Dirt Mile. Interestingly, it was in that same race the year before that Accelerate first got his name out there on the national scale.

Already a graded stakes winner coming in, Accelerate was sent off at odds of 42-1 in the 2016 Breeders' Cup Dirt Mile at Santa Anita. He far out-ran those odds, though, grinding down the stretch to just miss second place. While Tamarkuz ran the race of his life to win going away, it came down to a pair of 3-year-olds battling it out for the place. On the wire, the far more experienced of the pair had gamely held off Accelerate for second. That horse was none other than Gun Runner.

While the winner of that place battle quickly went off to bigger and better things, it took the third-place finisher a while to put it all together. Yes, it's true, the respective careers of Gun Runner and Accelerate went in drastically different directions after their lone meeting, but we finally got a glimpse into what Accelerate could become back in July of 2017.

With all eyes on the mighty Arrogate, the horse who famously powered past both California Chrome and Gun Runner on big stages, it was the then-unheralded Accelerate who looked the part of a superstar in the San Diego Handicap.

The biggest story that came out of the race was the disappointing run of Arrogate, but looking back, maybe more attention should have been paid to the romping winner. As good as he was that summer afternoon at Del Mar, his team would have to wait one more year for the chestnut horse to show his very best race in and race out. While 2017 closed out in an unfulfilling manner for the best son of the two-time champion, Lookin At Lucky, his fortunes would rise in his 5-year-season.

And perhaps that's an understatement. All Accelerate did in 2018 was win 6-of-7 starts, with a narrow defeat in the Oaklawn Handicap acting as the only blemish on an otherwise spotless season. He became the first horse ever to sweep the big four older races in California (Santa Anita Handicap, Gold Cup, Pacific Classic and Awesome Again) beforing adding a win in the Breeders' Cup Classic.

In the Breeders' Cup he defeated a field which included: Thunder Snow, Yoshida, Catholic Boy, McKinzie, West Coast and Gunnevera. By the way, the last two on that list were the same two that finished second and third to Gun Runner in the Pegasus. As with Gun Runner the year before, Accelerate dominated his competition in these wins. None were more impressive than his victory in the Pacific Classic.

His only loss last year came, as mentioned, narrowly in Arkansas. That afternoon, he gave weight and came back stoutly on the rail. Looking back, the defeat looks a whole lot better, as the horse who won it, City of Light, proved to be the real deal while winning the Breeders' Cup Dirt Mile. The Pegasus will be an opportunity for revenge for Accelerate with City of Light is expected to be the race's second choice.

More than payback, though, and a whole heap of money, the Pegasus will give Accelerate the chance to go out on a high note. It will give him the opportunity to be remembered as the outstanding horse that he developed into. With a Horse of the Year title perhaps off the table due to Justify's Triple Crown, the 6-year-old veteran could earn a great deal of respect with a going out victory.

How will Accelerate be remembered? The Pegasus will be key.

Kentucky Derby 2020: King Guillermo impresses at Churchill
The action beneath the Twin Spires for the Kentuck...