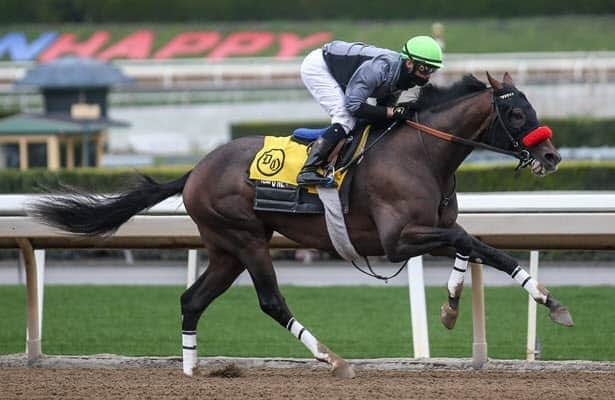 If ever a horse was due for a Grade 1 victory, it’s Hot Rod Charlie.

The hard-luck son of Oxbow will get his chance on Saturday as the likely favorite for the $1 million Pennsylvania Derby. The 1 1/8-mile test at Parx will be his fifth try in a Grade 1 race, and he has run just about as well as a horse can run in the first four without winning.

When Hot Rod Charlie arrived at Keeneland last fall, he was an unheralded juvenile from the West Coast. Trained by 2-time Kentucky Derby winning trainer Doug O’Neill, he had won only once in four starts in maiden company.

After a pair of losses on the turf, the handsome dark bay had gamely defeated fellow maidens on the Santa Anita dirt. The win showed promise, but not the type of promise that is expected of a top contender for the biggest race in the nation for 2-year-olds.

The definition of outrunning his odds, Hot Rod Charlie turned in a sensational effort in the Breeders’ Cup Juvenile (G1). Breaking from an outer post in the 12-hole, he worked out a great trip from the outside and rallied strongly to take over the lead from Jackie’s Warrior. Only a relentless rally by the soon-to-be champion, Essential Quality, denied him a shocking victory at astronomical odds of 94-1.

With his first attempt in a Grade 1 race in the books, the valiant Breeders’ Cup Juvenile runner-up was given a brief rest, with a 2021 run to the Kentucky Derby in mind.

After a very game defeat behind Medina Spirit in the Robert B. Lewis (G3) to begin the season, Hot Rod Charlie was a resounding winner over a field that included Midnight Bourbon and Mandaloun in the Louisiana Derby (G2). It was not a Grade 1 victory, but the win in the $1 million race demonstrated that he was a top contender for the Kentucky Derby.

The Run for the Roses would be his second try in a Grade 1 race, and once again he came to run. In traffic early in the 19-horse field, he smoothly extracted himself by splitting horses and put himself into winning position on the far turn.

He swung wide for the stretch run, but could never quite run down the top two, finishing third, beaten one length by the disputed winner Medina Spirit. Mandaloun and Essential Quality also were right there, finishing second and fourth, respectively.

Five weeks later, he made his third endeavor in Grade 1 competition in the final leg of the Triple Crown, and his effort in the 12 furlong Belmont Stakes was probably the best of his career.

Hot Rod Charlie threw down a crazy fast first quarter of :22.78 to grab the early lead in the marathon and was pressured throughout the grueling trip. Still he never wavered, leaving all the rest far behind, with only the champion Essential Quality able to grind him down after a spirited stretch duel. The runner-up effort was a lovely combination of bravery and class.

Six weeks after the Belmont came the Haskell (G1) at Monmouth Park. His fourth attempt in Grade 1 company also was his fifth million-dollar race. It appeared he had earned his first victory at the highest level after outdueling Mandaloun to the wire. But alas, it was not meant to be.

Stewards ruled that his drifting in during the stretch had caused Midnight Bourbon to stumble and lose his rider. Hot Rod Charlie was the best horse in the Haskell but was placed last.

Now two months removed from that disappointment on the Jersey Shore, he’s back and entered in another seven-figure, Grade 1 race. Working well, as usual, he seems primed for another Hot Rod Charlie-like effort.

Will try No. 5 be the charm on Saturday? It will not be easy with Medina Spirit, a horse he has never beaten, likely to be in the field. But as well as Hot Rod Charlie has run in every race since switching back to dirt, it would seem time. He is due. Overdue.