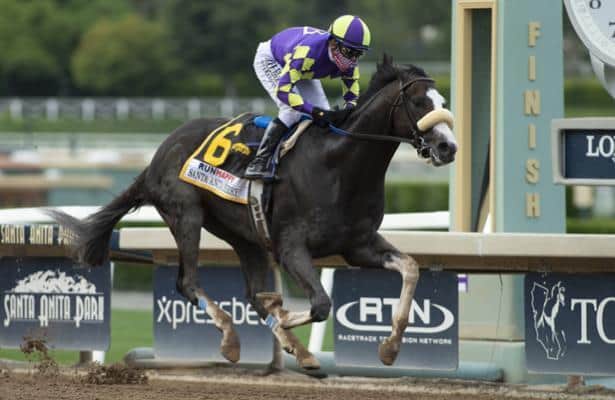 It’s far from commonplace, but every so often greatness begets greatness.

On a very short list of the most special horses I’ve ever seen run, Seattle Slew had it all. His combination of speed, tenaciousness, and proclivity to run all day was extraordinary.

Now more than four decades later, and a mere four races into his career, I am completely enthralled with his great grandson, Honor A. P.

The impressive winner of the Santa Anita Derby (G1) has looks to kill, a stride that extends out for more earth than any horse in training, and seemingly all the potential in the world to improve and become something truly special.

Perhaps the most exciting facet of Honor A. P., though, is his capacity to carry on a remarkable American sire line.

After an excellent start to Seattle Slew’s career as a stallion, it was hard not to wonder which of his sons would carry on the mantle and pass on the Triple Crown champion’s greatness to a new generation. His successor did not immediately materialize.

It was not until his 10th crop when A. P. Indy emerged.

Big, strong, with a low-to-the-ground running style which gobbled up massive amounts of ground with each stride, the son of Seattle Slew was recognized as special before he ever made his racing debut in late August of 1991 at Del Mar. The $2.9 million yearling purchase lost that one but rattled off wins in his next five, including the Santa Anita Derby, which sent him to Kentucky as a favorite for the roses.

A.P. Indy unfortunately had to miss the 1992 Kentucky Derby due to hoof issues, but he came back quickly for trainer Neil Drysdale and continued his winning ways with victories in the Peter Pan and the Belmont Stakes.

A popular victory over older horses in the Breeders’ Cup Classic ended his season, clinching both a 3-year-old championship and Horse of the Year title. Retired after his Eclipse Award season, he became the legacy that fans of Seattle Slew awaited.

Not only did A.P. Indy become a multiple year-leading sire and leading broodmare sire, but year in, year out, his name could be found among the top stallions in the United States.

Among his greatest sons and daughters included the talented champion Bernardini, Horse of the Year Mineshaft and the filly Rags to Riches, who matched her sire’s feat by beating Curlin and the boys in the 2007 Belmont. Near the end of his stallion career, he also sired Honor Code. In fact, that horse came in his final crop.

Not quite able to reach the heights of his Hall of Fame sire and legendary grandsire, Honor Code was a champion nonetheless. Within an 11-race career, in which he missed most of his 3-year-old season, he was able to win races like the Remsen, Gulfstream Park Handicap, Met Mile and Whitney under the patient handling of trainer Shug McGaughey,

A grand looking horse with a white blaze and four white stockings, Honor Code did enough with his explosive closing kick to be named the Champion Older Dirt Male of 2015. He also became a hot commodity for breeders after being sent to Lane's End to begin his stallion career the following year.

Among his initial crop was a flashy yearling who impressed buyers at the Saratoga Fasig-Tipton Sale. With a sale price of $850,000, Honor A. P. became Honor Code’s highest-priced offspring and like his sire and grandsire, he was sent to a notoriously patient trainer.

Just as A.P. Indy had done 28 years earlier, Honor A. P.'s career began with a losing effort in his debut in August at Del Mar. But even there, his vast potential was on display.

That fast closing runner-up finish was followed up with a very easy maiden win at Santa Anita.

After a longer than expected layoff, Honor A. P. came back to run a good second in the San Felipe (G2) in his 3-year-old debut, which set him up perfectly for his coming out party in Saturday’s Santa Anita Derby.

Just two weeks before Honor A. P.’s return to the races in this year’s San Felipe, A.P. Indy died at age 31. The poignancy of the passing of an American racing and breeding legend lends a special meaning to the name of the budding star.

It’s far too early to know if he will become a champion like his sire, a Hall of Famer like his grandsire, or even a legend like his great grandsire, but the potential of Honor A. P. would seem limitless.

While he very closely resembles his sire, it’s also easy to see Seattle Slew and A.P. Indy within this impressive horse.

The size, conformation, head and powerful neck have been carried on from generation to generation. His powerful stride and low running style are remarkably reminiscent of the way A.P. Indy attacked the racetrack. It would seem this outstanding sire line is in very good hands.

Certainly there are female lines here that deserve some of the credit as well.

Honor Code was produced by a stakes-winning Storm Cat mare named Serena’s Cat, who was a granddaughter of the fantastic race mare Serena’s Song.

Finally, the dam of Honor A. P. is the Wild Rush mare Hollywood Story. Trained by John Shirreffs, she was a multiple Grade 1 winner and a graded stakes winner in four consecutive seasons.

Now Shirreffs conditions her best son. Together they look ready to take on the racing world, and in the process, carry on the wonderful legacy of Seattle Slew and A.P. Indy.