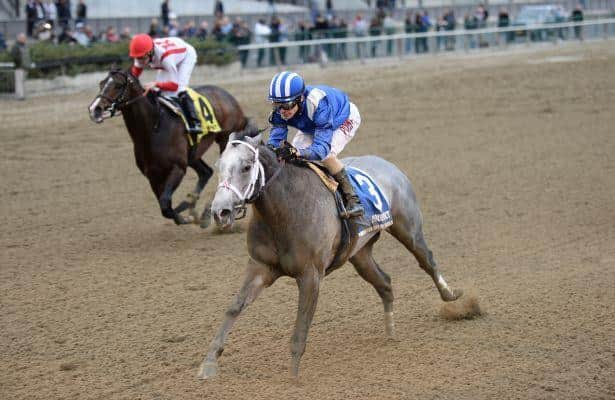 With all due respect to every stakes race run since the Breeders’ Cup Juvenile, for my money, Saturday’s Grade 2 Holy Bull at Gulfstream Park offers the first real major prep towards the 2016 Kentucky Derby. There are four primary reasons why I say this, and in each, I see a real chance for some success come the first Saturday in May. The first of the four has been a horse on people’s radar since he arrived at the Keeneland September sale of 2014.

Of regal pedigree, and royal good looks, Mohaymen fetched the princely sum of $2.2 million as a yearling, and has done nothing since to appear anything less than worth every penny. Owned by Shadwell Stable and trained by Kiaran McLaughlin, Mohaymen appears to be on his way to becoming the best chance yet for the team to win the big one in Louisville. He has not exactly blown the doors off his competition in each of his three lifetime starts, but in all of them, he has looked in command and capable of more if needed.

He got it all started with a popular front-running debut win going three-quarters of a mile at Belmont on September 19, in which he handled a pair of talented colts in Seymourdini and King Kranz. After that, it was right to graded stakes racing where the winning continued. In both the Grade 2 Nashua and the Grade 2 Remsen, Mohaymen proved to be the new King of Aqueduct with facile scores over Flexibility. Those wins were flattered when that one came back to dominate the recent Jerome Stakes. Since then, the big gray colt has been looking great while training at Palm Meadows in preparation for his date as the favorite and horse to beat in the Holy Bull.

Chief among his competition will be Conquest Stables’ Conquest Big E. Another grand looking gray son of Tapit, the colt named after stable co-owner Ernie Semersky, Conquest Big E showed some growing pains along the way as a juvenile, but there can be no denying his talent. Green and a bit troubled in two of his first three starts, the Mark Casse trainee still showed enough in his maiden breaker, which came in his second career start, to get a shot in the Breeders’ Cup Juvenile at Keeneland.

It was not meant to be for him that afternoon, but he began to fulfill his promise with an impressive allowance victory at Churchill Downs over Thanksgiving weekend. That victory, in his fourth and final start at two, as well as his forward training since at Palm Meadows, has his red-hot connections thinking big things starting with the Holy Bull.

He is not gray, nor is he a son of Tapit, but Greenpointcrusader will be the only Grade 1 winner in the Holy Bull field. Like Conquest Big E, the dark bay son of Bernardini boasts two wins from four career starts, and ran into a tough trip in the Breeders’ Cup Juvenile. He did finish up full of run to pass half the field that day at Keeneland, to give the impression that without the trouble, he would have been a great deal closer to the winner, Nyquist.

His run at Keeneland came on the heels of an impressive victory in the Grade 1 Champagne Stakes at Belmont. In that prestigious race, the son of Bernardini flashed an eye-catching turn of foot to win going away over a sloppy and sealed main track. He began his career for trainer Dominick Schettino with a pair of sharp and game performances sprinting at Saratoga. The Holy Bull will be his first opportunity to show the Breeders' Cup result was not a true indication of his class.

Then we have Cherry Wine. A son of one of my favorites, Paddy O’Prado, he is the most experienced of these four, but also will be making his first attempt in stakes company on Saturday. Like his sire, Cherry Wine is trained by Dale Romans, and for that top trainer he needed some time to figure things out. His steady improvement culminated in the maiden ranks in start number five, where he rolled to a 9 ¼-length victory at Churchill Downs in a race taken off the turf.

Building on his first taste of victory, the gray colt took to his first start over the Gulfstream main strip to the tune of a six-length romp in an optional claiming allowance race on January 9. Out of the Unbridled’s Song mare, C. S. Royce, this was his best performance yet, coming from last before inhaling the field in the 8 ½ furlong prep for the Holy Bull. The competition gets much tougher on Saturday, but he is clearly headed in a good direction.

All in all, it is easy to see why the Holy Bull is the first 2016 Kentucky Derby prep in which I am truly excited.