History of the World Part I 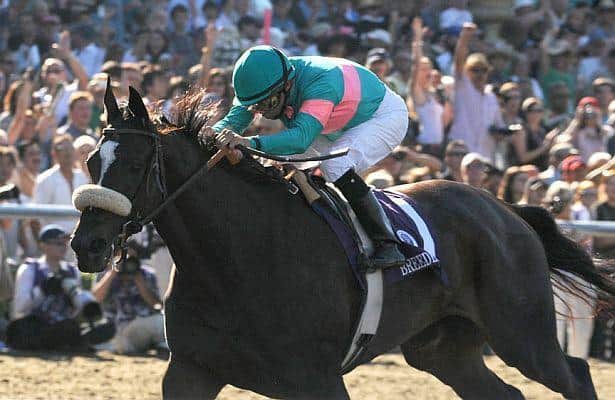 Everyone sees history a little differently. Realizing that I am far removed from the average person, I happily admit that the markers of my lifetime happen to be great moments in racing. I was four when Secretariat won the Triple Crown. I was in the fourth grade when Affirmed denied Alydar in the Derby, Preakness, and Belmont. I graduated high school the year Alysheba went to his knees in the stretch run of the Kentucky Derby, and so on.  In the great tradition of Mel Brooks, I offer my own History of the World, or at least part of it.

New Jersey-bred filly, Regret goes wire-to-wire at Churchill Downs in her first start of her three-year-old season to become the first of three fillies to win the Kentucky Derby.

The British oceanliner, Lusitania, was sunk off the Irish Coast by a German submarine. Nearly twelve hundred passengers and crew died, including 128 United States citizens.

Man O’ War completes his perfect season of 11 victories, in 11 starts with a seven length score in a match race with Triple Crown winner, Sir Barton. His final career race, the original Big Red is still considered by many to be America’s greatest horse.

The 19th Amendment is ratified. Women’s suffrage allowed for no citizen to be denied the right to vote because of their gender.

The rags to riches, people’s horse, Seabiscuit, upsets the previous year’s Triple Crown champion, War Admiral, in a much ballyhooed match race at Pimlico Race Course, clinching a Horse of the Year award.

Actor, director, and producer, Orson Welles, makes a name for himself when he broadcasts his adaptation of H.G. Wells's War of the Worlds, creating a nationwide panic as listeners believe that aliens have landed in New Jersey.

December 7, 1941 becomes a date which will live in inphamy, when Japan launches a surprise attack on the United States fleet at Pearl Harbor pushing America into World War II.

Italian trained, Ribot, proves his greatness on an international stage with an easy win in his first of two Prix de l’Arc de Triomphe victories. The all-time great would retire with a perfect 16-for-16 lifetime mark.

Rosa Parks becomes a symbol for civil rights when she refuses to sit at the back of the bus, breaking the Montgomery, Alabama segregated seating law.

In arguably his greatest season, five-time Horse of the Year, Kelso clinches his fourth, with an eight stakes race winning streak, culminating with a four length win in the Jockey Club Gold Cup.

President John F. Kennedy is assassinated on November 22 in Dallas. The 46-year-old Commander-in-Chief was shot and killed by Lee Harvey Oswald.

Secretariat not only sweeps the Triple Crown, but he does it in extraordinary style in winning by 31 lengths in the incredible time of 2:24 for the 12 furlongs.

The United States Supreme Court rules on Roe vs. Wade, effectively legalizing abortion in the first trimester of pregnancy.

The European Horse of the Year from two years earlier, Shergar, is kidnapped by masked gunmen from his stallion farm in Ireland. The great horse’s body was never recovered.

Dr. Barney B. Clark becomes the first human to receive a permanent artificial heart transplant at the University of Utah Medical Center in Salt Lake City.

American star, Cigar, becomes the inaugural winner of the world’s richest race, the Dubai World Cup, by holding off another American, Soul of the Matter.

After 17 years of eluding the FBI, the unabomber, Theodore Kaczynski, is finally arrested in his small cabin in Montana.

Zenyatta raises her career record to 14-for-14 while becoming the first female horse ever to win the Breeders’ Cup Classic against a full field of males.

Pilot Chesley “Sully” Sullenberger is hailed as the “Hero of the Hudson” after a successful emergency landing of a US Airways flight in the Hudson River, saving everyone aboard.