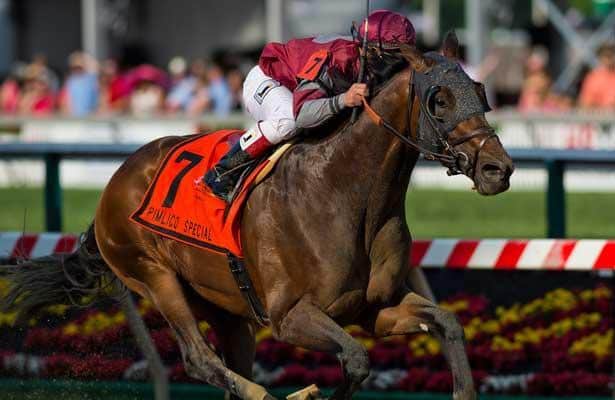 After you polish off another turkey sandwich on Saturday afternoon, it’s time for one of the best days of racing of the year. Big races at Aqueduct, Churchill Downs, and Hollywood Park abound, but let’s not forget about my local track. That’s right, Saturday is Hawthorne Gold Cup Day, and armed with its new holiday spot on the calendar, the historic autumn affair gives the older male division one last chance to run for big money going the classic distance of 1 ¼ miles on the dirt. While there may be no horses the likes of former winners Round Table, Kelso, and Dr. Fager in this one, there is a solid field of nine ready to battle it out for the lion’s share of the $350,000 purse. Without further adieu, let's take a look at the field from the rail out...

Mister Marti Gras: While this name may not strike fear into connections on a national scale, the local gelding has been a model of consistency in Chicagoland and the Midwest. Fourth beaten three lengths in last year’s Gold Cup, he once again comes in on good form for trainer, Chris Block. The winner of nearly one million, he can handle any surface, at any distance, and has finished first or second 18 times. While certainly not the headliner, he always has a good shot to hit the board.

Derby Kitten: It wouldn’t be a big race in the Midwest these days without a Ken and Sarah Ramsey runner sired by Kitten’s Joy in the field. This time they look to have a bit of a longshot in Derby Kitten, however. While the five-year-old’s recent form seems to be as good as ever, it would be hard to recommend a horse who has never won a race on dirt in his career. The way things have been going for his powerhouse stable, though, I would never say never.

Last Gunfighter: Unfortunately from a betting standpoint, the likely morning line favorite is also the horse I see as a bit of a standout in here. While he has yet to breakthrough in a grade 1, the four-year-old son of First Samurai has been able to consistently win races that he should win. He’s won half of his lifetime starts, and has accounted for five stakes wins in the last twelve months. He’s been beaten in his last two, but a performance similar to his rallying 5th place finish, beaten less than five lengths, puts him right back into his familiar place in the winner’s circle.

Hattaash: Another local runner, who has an excellent record over the Hawthorne main track. The problem is, none of his five wins at Hawthorne have come in a stakes race, let alone something as big as this. He does come in on career best form, but still, this would seem to be a stretch.

Alpha: Just call him Alpha the enigma. A winner of five stakes races in New York, including last year’s Travers (dead heat with Golden Ticket), and this year’s Woodward, Alpha has just never been able to get it done out of town. He has run in a lot of tough races, though, and along with Last Gunfighter, he looms as the class of the race. He also possesses the natural speed to be in this one from the get-go. On a dry track, he is a threat, but if it does come up sloppy, he becomes a huge threat.

Fordubai: One of two three-year-olds in the field owned by Jim Tafel and trained by Greg Geier, Fordubai has proven to be a really nice horse in 2013. The surprise second at 23-1 in this spring’s Illinois Derby (also at Hawthorne), he has verified that result with a pair of solid wins this summer at Arlington Park. Having said that, he looks destined to be up against things against this bunch, much as was last time when he finished in the middle of the pack in a large Indiana Derby field.

Prayer For Relief: First or second in all of his starts in 2013, until being chased off by the strong early speed of Fort Larned in his latest, Prayer For Relief has proven to be a tough hombre in races a cut below the grade 1 variety. Like Alpha, he has enough early speed to put himself in the race early on, and while I don’t think he is quite as talented as Last Gunfighter, if that one falters just a bit, this year’s Cornhusker hero would seem to be one of the most likely candidates to take advantage. *** Scratched - Will run in Clark instead ***

Suns Out Guns Out: While it’s hard to gauge a horse coming out of the 1 ¾ miles of the Breeders’ Cup Marathon, it is not difficult to see that this is a horse on the improve. Beaten only 2 ½ lengths in the Marathon, the regally bred West Point Thoroughbreds’ runner has really come into his own for trainer, Dale Romans. Despite running in primarily allowance events this year, he has kept good company, and it is probably just a matter of time before he breaks through … maybe Saturday.

Street Spice: The lesser accomplished three-year-old from the Jim Tafel and Greg Geier duo, Street Spice is one of the few horses in the field without a stakes win. On the plus side, he likes the Hawthorne main track, and is bred to handle all of the ten furlongs of the Gold Cup. He could be one of the ones passing tiring rivals late to cash a check, but better than that seems highly unlikely.