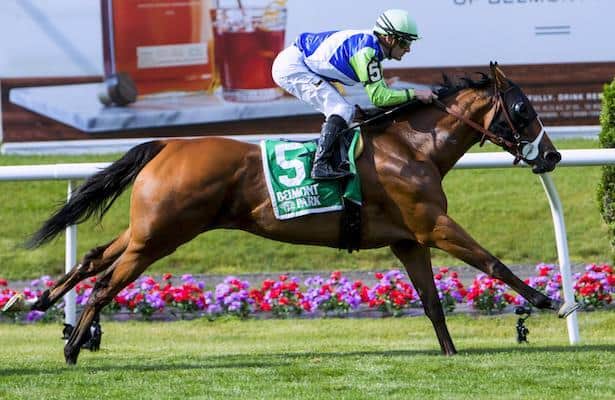 Hawksmoor is a good filly, and when you give a good horse an easy time of it on the early lead, the race quickly becomes in jeopardy for every other horse in the race. So it was in today's $500,000 New York, as the Irish-bred filly had plenty left in reserve to sprint away from her pursuers. On the wire, the 11-1 longshot was an uncomplicated one-length winner.

Final time for the ten furlongs over the firm Belmont turf was 2:01.18, which is nothing overly noteworthy, but when you consider that the Lael Stables' owned Hawksmoor covered the final half mile in an outstanding 45 seconds and change you can understand how and why this race was won.

Astute handicappers may have noticed the lack of speed in the New York after the scratch of Sassy Little Lila. With the only speed out, that left the door wide open for one of the talented turf females to take over early. Enter Hawksmoor, and her rider, Julien Leparoux. Despite going wire-to-wire in the Grade 3 Beaugay in their first voyage together, the pair was largely ignored for today's Grade 2 test.

Moving right out to the lead, the Arnaud Delacour trained four-year-old filly soon found herself all alone. While there was plenty of talent behind her, none of the others (and their riders) were willing to break from their normal off the pace styles to take the race to Hawksmoor early. That collective decision would prove all the advantage the winner would need.

Coasting through early splits of :24.27, :49.72, and 1:15.57, it wasn't until the far turn when 7-2 shot Quidura and the rest began to cut into her early lead. That one got within three-quarters of a length to the leader, but as soon as the field of eight hit the stretch, Hawksmoor was let loose and turned it on down the lane. Quidura was clearly best of the rest, but could never threaten the winner.

"She can do whatever you want," remarked Leparoux after the victory. "She proved today that she can go a mile and a quarter. I think she can go even longer if we need to, so she's very versatile with distance and how the track is."

Owned by Americans, ridden and trained by Frenchmen, and bred in Ireland, Hawksmoor raised her career record to 13-5-0-5. A Group 3 winner in England, and a Group 2 winner in Germany, the daughter of Azamour now has won two straight graded stakes in New York, after losing her first two starts in America, both of which came in Kentucky last fall. Today's victory pushed her career earnings to $693,739.

"I wasn't surprised when they left her alone out there'" said the happy winning trainer, Delacour. I got a little worried when I saw the opening quarter because it looked like she was pulling a little bit, but when I saw the time at the half-mile pole in 49.72 [seconds] I was very happy. I knew they were going to have to come and get her and she did good. I don't really know the filly too well. But obviously, she proved today that she can run with an efficient turn of foot on firm turf which was the question mark so we're very delighted."