Hard Spun is a Dynamic and Excellent Sire 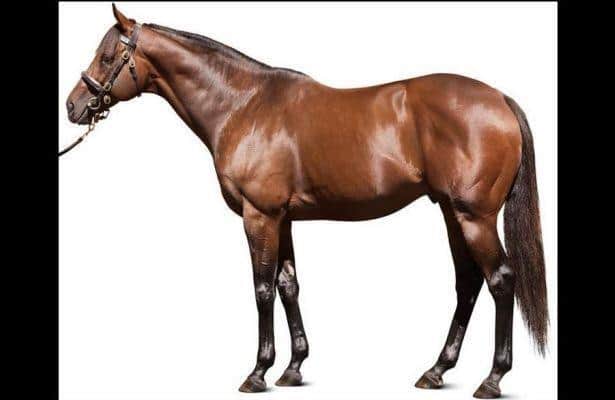 As a runner, Hard Spun was the genuine article. The last Grade 1 winning son of Danzig was both fast enough to beat top sprinters, but substantial enough to run with the best at classic distances. Proof of that is easily illustrated by his excellent second place finish to Curlin in the Breeders’ Cup Classic, and in the Kentucky Derby to Street Sense, a rival he would later defeat in the nine furlong Kentucky Cup Classic, as well as his fantastic win in the Grade 1 King’s Bishop at seven furlongs. Overall, the Pennsylvania-bred compiled a 13-7-3-1 for owner Fox Hill Farm, and trainer Larry Jones, in just a few days over 12 months on the track. As good as he was on the track, Hard Spun has the potential to be even better as a sire. Standing for $35,000 at Darley America, the 11-year-old stallion has been a major hit at stud with his first three crops, and this weekend may have been the young sire’s best yet.

Proving his versatility as a stallion, Hard Spun (Danzig--Turkish Tryst, by Turkoman) had two big winners in decidedly different types of races over the last two days. First, on the West Coast, Big John B rallied boldly on the rail, under Rafael Bejarano, and then gamely held the rally of Bailoutbobby at bay, to score by a half-length in the Grade 3 $100,000 Cougar II Handicap at Del Mar.

Winning was nothing new for the six-year-old gelding, who has made a habit of making it to the winner’s circle of late, but the fact that the 12-time winner on the grass showed a new dimension by earning his first career victory on the dirt in the 12-furlong feature, both opened up new opportunities for his racing career, as well as, pointing out the great versatility of Hard Spun as a sire. Big John B’s victory on Friday was nice, and another eye opener, but today’s doings at Saratoga was much bigger.

Less than 24 hours after Big John B did his thing at Del Mar, Hard Spun’s gray daughter, Hard Not To Like, uncorked a flashy and furious late rush to nail the leaders on the wire in the Grade 1, $500,000 Diana. Also six, and from the first crop of the hero of this article, Hard Not to Like scored her third career Grade 1 with today’s win.

There was nothing wrong with wins in last year’s Jenny Wiley at Keeneland, and the recent Gamely at Santa Anita, but today’s Diana was her biggest win yet. Not only was it her second consecutive win at the highest level, but doing it on the huge stage of Saratoga’s opening weekend, against a stacked field of turf mares, clearly demonstrated that she is now on a short list of the best turf females in the nation. Oh yeah, did I mention that she also set a new course record of 1:45.22 for the nine furlongs over the Spa’s turf course? In a word, it was blistering.

With Hard Not to Like and Big John B making it an enormous weekend for Hard Spun the sire, now is as good a time as any to start seriously looking at what the talented runner has been able to do in his first few years at stud. The list of top quality sons and daughters is already a long one. Besides his recent winners, other big names include: Hard Aces, who just last month scored in the Grade 1 Gold Cup at Santa Anita, Hardest Core, winner of the Grade 1 Arlington Million last summer, Wicked Strong, one of the top three-year-olds in the nation last year, and Zo Impressive, the lightly raced winner of the Grade 1 Mother Goose -- just to mention a few.

And that small sample does not even include Hard Spun’s first champion, Questing, who won an Eclipse Award as best three-year-old filly of 2012. Darley America proudly reminds me that Hard Spun is one of only 11 sires since 1990 to have sired at least six Grade 1 winners in their first three crops. As far as 2015 goes, only Tapit has more Grade 1 winners than Hard Spun so far this season.

Sons and daughters of Hard Spun have won big races all over the globe. Turf or dirt (or synthetic for that matter), short or long, it does not seem to matter. They can do it all. It seem that Hard Spun is siring many chips off the old block. For all these reasons, and because I loved him as a runner, Hard Spun has become my favorite sire out there. Who is your favorite sire?