Zipse: Gun Runner might be better as a sire than a runner 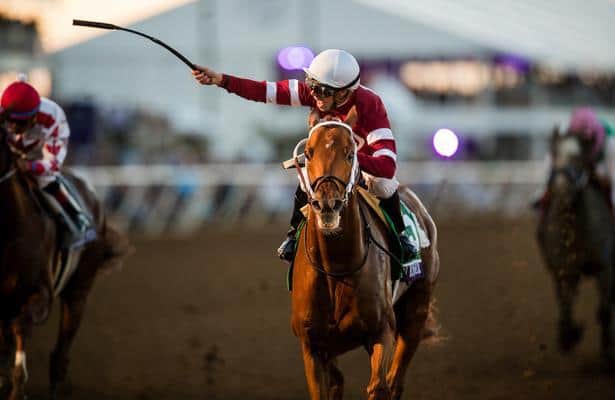 Gun Runner had nearly everything you could want as a runner. As a sire, he might be even better.

In what is quickly becoming one of the strongest first crops for a sire in modern racing history, his son Early Voting became his first classic winner when he won the Preakness with a 1 1/2-length victory over Epicenter.

A son of the unbeaten Grade 1 winner and immensely talented Candy Ride, who also went on to become a top sire, Gun Runner was bred to be a good one. His dam is Quiet Giant, a multiple stakes winner from a distinguished female family that traces back to the great mare Gallorette.

An impressive winner of his debut race in the fall of his 2-year-old season, Gun Runner was an instant success on the track. Six months after his debut, he had already won the Louisiana Derby (G2) and Risen Star Stakes (G2).

His ascent as a stallion at Three Chimneys Farm has been even more meteoric. Before Saturday’s classic victory by Early Voting, the six-time Grade 1 winner and 2017 Horse of the Year already was a dominant figure among first-crop sires.

Last season his 2-year-olds amassed double the earnings of his nearest competition, bettering $4.3 million in progeny earnings. Gun Runner also led his sire class by total of winners with 31, number of graded stakes winners with four, and number of Grade 1 winners with two.

With his Preakness win, Early Voting did something his sire never did. But he still will have a mountain to climb to match the racing achievements of Gun Runner.

One of the best 3-year-olds in the nation all season long, he was third in the Kentucky Derby and Travers (G1) and second in the Breeders’ Cup Dirt Mile before earning his first Grade 1 victory over older horses in the Clark Handicap at Churchill Downs.

It was a sophomore season that collected four graded-stakes wins but was far short of what he would accomplish after that.

After a comprehensive win in the Razorback (G3) at Oaklawn Park to kick off his 4-year-old season, Gun Runner traveled overseas to finish a good runner-up to Arrogate in the rich Dubai World Cup. Upon returning to America, he was unbeatable the rest of the way.

Dominant wins in four Grade 1s – the Stephen Foster, Whitney, Woodward and Breeders' Cup Classic – propelled him to a clear choice as America’s Horse of the Year in 2017.

Gun Runner closed his racing career with a big win in the Pegasus World Cup (G1) the following January. All told, he won 12 of 19 career races with just a shade under $16 million in career earnings.

It remains to be seen whether a son or daughter of his will ever enjoy a career with numbers like that. But it’s clear that as a sire, Gun Runner could not be off to a better start.

Echo Zulu already is a champion, and it certainly appears that Early Voting, Taiba and Cyberknife have the potential to do something special in their careers.

Throw in graded-stakes winners Pappacap and Wicked Halo, as well as a long list of already stakes-proven horses, and you can see why the young stallion is spoken about in such glowing terms.

The first crop of Gun Runner is already the best for an American sire in a long time. Just imagine if they prove durable and improve with age like their sire did.

Meet Brian Zipse
Brian has been a passionate fan of horse racing his entire life. Taken to the races at a very young age, he has been lucky enough to see all the greats in person from Secretariat, Forego, and Ruffian through Rachel Alexandra, Zenyatta, American Pharoah and Justify. Before coming to HRN, Brian displayed his love for the sport through the development of his horse racing website, which quickly became one of the most popular blogs in the game. His racing partnership venture, Derby Day Racing, invites more fans to experience the thrill of racehorse ownership.
The Editor of Horse Racing Nation from 2010-2017, Brian authored a daily column as Zipse at the Track, created the popular racing webcast HorseCenter, and added his editorial flare to the overall content of the website. Now a Senior Writer for HRN, Brian continues to contribute his thoughts on racing, as well as hosting HorseCenter. A big supporter of thoroughbred aftercare, he serves on the Board of The Exceller Fund.
Brian's work has also been published on several leading industry sites. He has consulted for leading contest site Derby Wars and is a Vox Populi committee member. He is a voter for racing's Hall of Fame, as well as a weekly NTRA poll voter.
A horse owner and graduate of DePaul University, Brian lives just outside of Louisville with his wife Candice and daughter Kendra.
ZATT's Star of the Week
Nature Strip