Groupie Doll is Back! 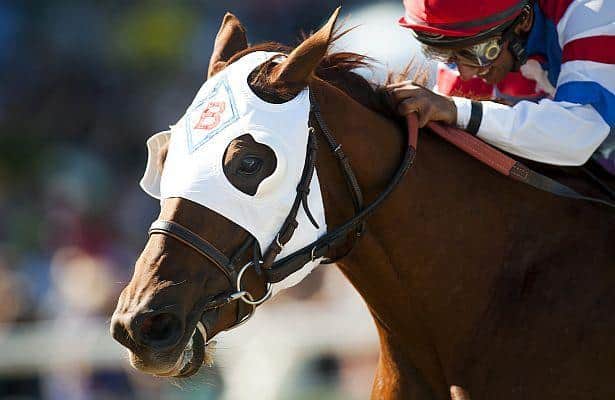 The reports from some that Fred and Buff Bradley’s Groupie Doll no longer has it, would seem to be a tad bit premature. Ridden masterfully by Rajiv Maragh, the defending Champion Female Sprinter rallied from well off the pace to win Monday's Grade 2 $400,000 Presque Isle Downs Masters in impressive fashion.

Trained by Buff Bradley, Groupie Doll was sent off as a prohibitive 1-2 favorite in the nine-horse field. Breaking from the eight-hole, Groupie Doll was content to drop back near the back of the pack, as Winning Image and Toto Cor joined in a heated early battle. As the pair rattled off impressive early fractions of 21.87 and 44.10, the five-year-old daughter of Bowman’s Band fell farther back than she has been in years, before beginning to pick off horses heading into the far turn.

Making steady progress on the outside, Groupie Doll moved quickly to the leaders on the turn, and looked primed to blow by them all turning for home. The local horse had other ideas, though. Sent off at 10-1 in the biggest race of her career, Purely Hot struck the lead just ahead of Groupie Doll, and a stretch battle ensued.

Purely Hot, who had won all five starts this year at Presque Isle, all of which were won easily, proved a dogged challenger for much of the stretch, but eventually the champion would exert her class on the newcomer to high-level stakes racing. Edging clear the final 50 yards, Groupie Doll powered home a 1 1/4-length winner.

Groupie Doll’s final time for the 6 ½ furlongs over the Tapeta surface was 1:14.88, which established a new track record.

Purely Hot ran a huge race in a losing performance while holding off the 3-1 second choice, Judy the Beauty, who rallied well in the lane, by three-quarters of a length. Sounds of the City was two lengths farther back, and rounded out the superfecta.

Groupie Doll was making her second start of the year after winning the Eclipse Award in 2012. The winner of 5-of-9 during her championship season, Groupie Doll had finished third in the Gardenia Stakes at Ellis Park last month.

With one repeat in the books, Groupie Doll will now follow the same path that culminated in a championship last year. Next, she’ll attempt to defend her victory in the October 5 Thoroughbred Club of America at Keeneland, before the big one on November 2 at Santa Anita. A repeat in the Breeders' Cup Filly & Mare Sprint could well mean another championship for the popular mare.

While the doubters remain skeptical that she can do it again, yours truly is not among them. I have followed Groupie Doll since the beginning, and I know she only gets better and better throughout the year. In my opinion, she is right on schedule, and while it is tough to repeat as champion, I consider her as clearly the one to beat come Breeders’ Cup.