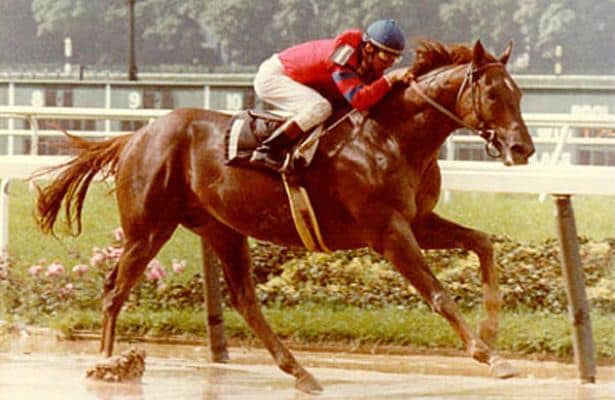 Sometimes greatness goes unrecognized, and sometimes great thoroughbreds failed to ever have their names called when the championships are handed out. The following list represents my ranking of the greatest horses in American racing history who, through no fault of their own, just so happened to have never won a championship. Join me in celebrating these racing greats today...

1. Alydar (26-14-9-1) If only he was born a different year. Alydar is on the short list of the best horses I’ve ever seen, and if not for a certain beautiful chestnut by the name of Affirmed, who knows in what regard history would hold the multiple Grade 1 winner. Alydar was great at two, and was great at three, but Affirmed was just inches better. While Affirmed will be remembered as one of the all-time greats, Alydar is relegated to be the only horse ever to finish second in all three legs of America’s Triple Crown. He won the Whitney by 10, and he won the Blue Grass by 13, and in my eyes, Alydar is the greatest horse never to win a championship.

2. Gallant Man (26-14-4-1) While Alydar had Affirmed to deal with, Gallant Man may have been born into the greatest crop in American history. Unlucky not to win the Derby, and a rousing winner of the Belmont, this durable colt was an impressive stakes winner from 6 furlongs to 2 miles. Bold Ruler and Round Table may have hogged the championships, but Gallant Man was too good to ignore. Odd that he should have the same number of starts and wins as Alydar; he proudly holds down the two spot on this list.

3. Native Diver (81-37-7-12) No list of America’s great geldings is complete without mentioning Native Diver. Stuck in the shadows of East Coast giants like Kelso and Buckpasser, all this California-bred gelding did was collect stakes wins in seven consecutive years, and he won them in bunches. The best in his native state, Native Diver was California’s star for most of the decade of the 1960’s.

6. Johnstown (21-14-0-3) Back-to-back eight length wins in the Wood Memorial and Kentucky Derby were not enough to earn a championship over Challendon, but his Hall of Fame career was much more than those two important springtime wins. A winner of two-thirds of his career starts, this speedster also added races like the Belmont, Dwyer, Withers, Remsen, and Breeders’ Futurity to his impressive list of accomplishments.

7. Eight Thirty (27-16-3-5) From the same great crop as Challendon and Johnstown, Eight Thirty was a good juvenile that missed participating in the Triple Crown, but later that summer, he proved as good as anyone. He continued on to win races like the Travers, Whitney, Saratoga Cup, Mass Cap, Suburban, Wilson, and Met Mile, before finally calling it a career after his five-year-old season.

8. Exceller (33-15-5-6) Long considered one of the premier turf horses on either side of the pond, Exceller won Group or Grade 1 races on the lawn in France, England, Canada, and America before proving to be equally excellent on the dirt. In fact, perhaps his notable win of many on American soil came on the soil, when he nipped Seattle Slew (with Affirmed well back) in the 1978 Jockey Club Gold Cup. Unfortunately, this great horse’s life came to a sickening end in a Swedish slaughterhouse.

9. Lure (25-14-8-0) Lure probably came a few years early to be fully appreciated. While the distance horses took home the turf awards, Lure went on to become one of the greatest middle-distance turf horses in American history. As consistent as they come, his back-to-back wins in the Breeders’ Cup Mile were as dominant as any of the greats that repeated in the race before or since.

10. Best Pal (47-18-11-4) It’s actually hard to imagine that Best Pal never won an Eclipse Award considering he was at, or near, the pinnacle of American racing for each of his first six outstanding seasons of racing. Perhaps it was his 0-for-4 record in the Breeders’ Cup and Kentucky Derby that did him in, but from 2 through 7, he won everything there was to win in the state of California, including the Big Cap, Pacific Classic, and Hollywood Gold Cup.

11. Lava Man (47-17-8-5) Much like Native Diver and Best Pal before him, Lava Man became a staple in big races in California over an extended period of time. After beginning his career in lowly claiming races on the California State Fair, the gelded son of Slew City Slew kept improving to the point where he became the unquestioned King of California. Perhaps the reformed claimer’s greatest feat was winning the Hollywood Gold Cup three straight times.

Ancient Title was one of our first millionaires with a racing career that lasted seven distinguished seasons, mostly in California, but he also won at the highest level in New York. Sadly, Barbaro would never run again after a Preakness injury that ultimately claimed his life, but he did enough in winning his first six starts, including the Kentucky Derby, to claim a spot on this list. Black Gold won the 1924 Kentucky Derby, as well as several other big stakes, but was edged out for a championship by another Hall of Famer, Sarazen. Formal Gold came around too late at 3, and was retired too early at 4, but still managed to become a King of the Beyers with overpowering wins over Skip Away in the Iselin and Woodward to close his career. Perhaps not quite as accomplished as a few of the California geldings on this list, Game On Dude still has the be mentioned after a sustained run near the top of American racing. Someone had to give Kelso a run for his money, and Gun Bow was up to the task. Kelso came out on top overall, but Gun Bow was able to defeat the great horse in two of their memorable meetings. Who knows how good Graustark would have become if he was not injured while on the lead in the Blue Grass, but his first seven wins without a loss deserve mention. Alydar had Affirmed, Sham had Secretariat. Dominant in Southern California leading up to the Triple Crown, he ran huge races in the Kentucky Derby and Preakness only to play second fiddle to Big Red, before seeing his career ended way too soon. Among the greatest Midwestern horses ever, Swoon’s Son won sprints, and routes, on turf and dirt, and set track records at more than one racetrack, over a career that saw him win 30 of his 51 lifetime races.