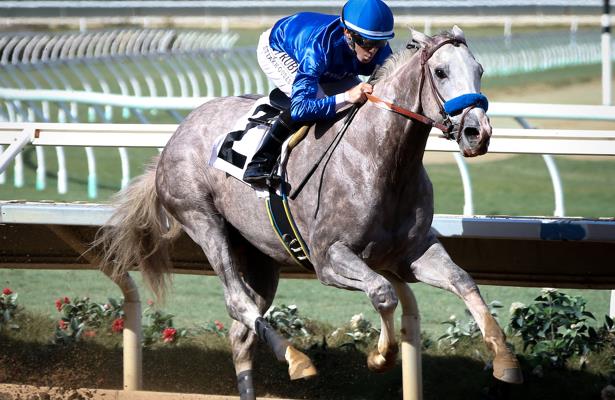 The Melbourne Cup, and the first race run Saturday at Del Mar could not be more different. One is a true marathon, held in Australia and run on the grass, while the other is a maiden dirt sprint in Southern California. Yet the two races, with so little in common, may ultimately signal the dawning of a new day for racing's most recognizable silks thanks to a pair of very talented young colts.

Godolphin quickly established itself as a racing superpower in the early 1990s, and in the last quarter century the stable has been a dominant figure in important races around the world. The global racing empire was founded and run by Sheikh Mohammed bin Rasheed Al Maktoum, and to say that His Highness has a thirst for winning big races would be a massive understatement.

One by one, and often in rapid succession, Godolphin has secured the winner's trophy in most of the world's biggest races. Europe and Dubai have been their racing playgrounds, but their reach has found success everywhere. Still, when the Breeders' Cup was run just a few weeks ago, there were two notable holes in the stable's resume. The Kentucky Derby, the most prestigious race in America, and the Melbourne Cup, the most prestigious race in Australia, had somehow eluded them.

Make no mistake, these are two races that Sheikh Mohammed would love to win. Evidence of this can be seen in the amount of time and money his stable has invested in the two classic races. After nearly three decades of trying, Godolphin finally found success in Australia when Cross Counter stormed home to win the Melbourne Cup.

Conditioned by one of Goldolphin's main trainers, Cross Counter was ready, willing, and able for the grueling test that is the "race that stops a nation." Clearly Charlie Appleby was masterful in training the lightly raced homebred 3-year-old to win such a demanding affair. For Appleby, the victory came in only his third attempt at the Australian classic and came on the heels of Line of Duty's score in the Breeders' Cup Juvenile Turf days earlier.

With the Melbourne Cup finally in the possession of Sheikh Mohammed, the Kentucky Derby now becomes the lone jewel of international racing which Godolphin does not own. They've won the Dubai World Cup many times over, multiple editions of the Prix de l'Arc de Triomphe, as well as the Breeders' Cup Classic. In 2018, they also added an Epsom Derby score to their big success down under. Still, the Kentucky Derby has always evaded them, but not for a lack of trying.

Appleby's training job with Cross Counter is reminiscent of what America's Bob Baffert has done in the Kentucky Derby. Any current discussion about the Run for the Roses must include Baffert, who has won the race five times. Most notably, he has recently taken a pair of lightly raced talents, in American Pharoah and Justify, and managed them into not only Derby winners, but Triple Crown champions, as well.

With all this success in the Kentucky Derby and beyond, it seems only natural that Godolphin would call on the California-based trainer to finally get them over the hump. It seems it did not take long for the partnership to get rolling.

The word was out on Coliseum well before his first race, and the gray colt, who Baffert calls the best of his new Godolphin contingent, only exceeded expectations with his debut performance.

Criticized in years past for bringing horses over to the Derby without the proper American dirt experience, Godolphin now has tapped into what seems like a fool proof way to finally break through on the first Saturday in May. Certainly Baffert knows how to get a horse to the Kentucky Derby, and the Triple Crown, better than any other current trainer, and Godolphin is betting on that success.

Of Godolphin's previous Kentucky Derby starters, its best chance to date was probably Frosted, who ran a good race to be a fast closing fourth back in 2015. The winning trainer that afternoon was, not so coincidentally, none other than Baffert.

After two decades of trying, will Coliseum finally become the horse to bring the famous blue silks of Godolphin into the Derby winner's circle? Possibly. He demonstrated on Saturday that he's a horse of serious talent, and in Baffert's hands, he will have every chance to make it all the way to Churchill Downs.

But of course, it's a long road to Louisville. Whether it's with Coliseum or another horse, betting on Godolphin to at some point land a Derby victory seems a smart play.