Zipse: Girvin is off and running as an unheralded young stallion 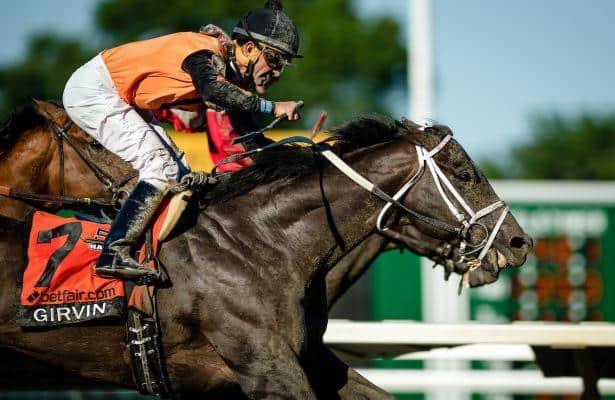 I always believed that Girvin was better as a runner than he was given credit for. Now that we’ve seen a small sampling of his first crop make the races, it appears he will find success as an unheralded young sire, as well.

A sharp debut winner in December 2016, Girvin accomplished a good deal in only 10 career races. Early in the 2022 juvenile season, the son of Tale of Ekati already has established himself as one of the top freshman sires in the nation.

Girvin was on the board with the stakes-winning filly Devious Dame, who rallied from off the pace to easily win the Astoria Stakes at Belmont Park on June 9. He then earned his first graded-stakes win as a sire when Damon’s Mound cruised home a 3 1/4-length winner over the much-talked-about Gulfport in Saturday's Saratoga Special (G2).

Girvin’s first two stakes winners, Devious Dame and Damon’s Mound, have quite a bit in common.

Both were bred in Florida, and while Devious Dame was a $240,000 2-year-old-in-training purchase and Damon’s Mound is a Cliff Love homebred, they each made their career debut at Churchill Downs. The result was similar, but the colt made more of a splash while winning first out.

Devious Dame contested the early pace in a 5-furlong maiden special weight on Kentucky Derby week and drew away from her competition for a 5 1/2-length debut win.

Damon’s Mound, on the other hand, broke just a little slow against ten others in his career debut on July 2, but he rushed to the lead and kept going on his way to a 12 1/2-length runaway in 1:09.84 for the six furlongs.

Their sire became a graded-stakes winner in his third career start, when Girvin rallied nicely at Fair Grounds to win the Risen Star (G2) by two lengths in late February of 2017. A little more than five years later, his top two early juveniles have proven more precocious than he was.

Each of them traveled to New York for their second career start, and they both were able to come off the pace to score convincing stakes scores.

The Norm Casse-trained Devious Dame won hers going away by 5 1/4 lengths at Belmont Park, while Damon’s Mound was able to swoop right by the highly regarded Gulfport on his way to clear-cut victory on the big stage of Saratoga for trainer Michelle Lovell.

Both Devious Dame and Damon’s Mound are now undefeated stakes winners who look bound for their respective Breeders’ Cup races in a few months, already making Girvin a success in his first crop.

Looking back at his career as a runner, Girvin never quite earned the respect as one of the top horses of his foal crop, but maybe he should have.

West Coast and Classic Empire won Eclipse Awards and Always Dreaming took home the Kentucky Derby, but the Joe Sharp-trained son of Tale of Ekati was pretty darn good in his own right.

Admittedly, he did not bring his “A” game to either the Derby or the Travers, but his win in the Haskell (G1), over a field that included Battle of Midway, Practical Joke, McCraken, Irish War Cry and Timeline, was one of the best of 2017.

Girvin also ran a deceptively big race when beaten a nose by the talented and ill-fated Irap in that year’s Ohio Derby (G3). Throw in victories in the Louisiana Derby (G2) and Risen Star (G2), and you can see why I felt that he deserved more accolades than he was given five seasons ago.

Unfortunately, his racing career was cut short after only one start at 4, but he still managed to amass better than $1.6 million, while finishing first or second in seven of his 10 career races.

We have a long way to go to find out what kind of sire Girvin will truly become, but it's nice to see him off to a great start with his first crop. And standing for a modest $6,000 stud fee at Ocala Stud, the underappreciated runner appears to be a great value as a stallion, as well.