Gervinho breaks through in the Sir Beaufort 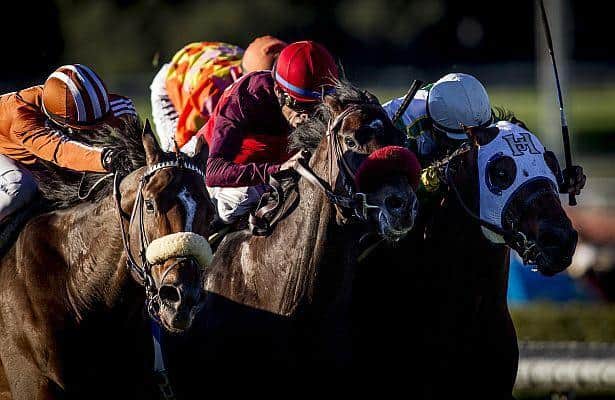 Consistency is something the world needs more of. In the world of thoroughbred horse racing, only a select few horses have it. Rare is the horse that just fires every time; Zenyatta being a marvelous example. He’s no Zenyatta, but Gervinho is one consistent runner. Today, in front of an appreciative Opening Day crowd at Santa Anita, the chestnut son of Unusual Heat did what he does every time. He ran a good race. In fact, his win in the Grade 2 Sir Beaufort Stakes might have been his best performance yet.

Gervinho, the 7-2 third choice in the field of nine, broke sharply under Rafael Bejarano, before easing back to the middle of the field as the leaders carved out fast middle fractions of :45.19 and 1:08.70 in the one-mile event. Brought to the outside for clear running, Gervinho was pushed out even farther both on the turn and in the stretch by long shot, Outside Nashville. Undeterred, and now in middle of the turf course, the Carla Gaines charge kept coming. In a mad dash to the wire, Gervinho proved best by a short head over Procurement, who had rallied on the rail. Completing the blanket finish was Si Sage and the offending, Outside Nashville, who dead-heated for third, just another nose back. The latter was taken down and placed fourth for interference.

In finally earning his first graded stakes victory, Gervinho raised his lifetime record to 9-4-2-1, with earnings of $422,140. In his career he has never been beaten by more than 2 ¾ lengths, his losing margin in both the Breeders’ Cup Juvenile Turf and the ten furlong Hollywood Derby. Final time for the eight furlongs on the firm turf, for the Keith Brackpool owned colt,  was a solid 1:33.47.

One race before the Sir Beaufort, Heir Kitty wore down favored Sweet Lulu late to pull off a 13-1 surprise the Grade 1 La Brea Stakes. Heavily favored at 4-5, Sweet Lulu went right to the early lead on the rail, but was pressured throughout by long shot, Journey On. As the pair rattled off demanding fractions of :22.67 and :45.45, Heir Kitty and jockey, Gary Stevens were content to stalk in fourth on the inside. As the field approached the sprint for home, her veteran rider asked for run, and the pair moved smoothly off the rail. In what quickly became a two-filly affair, Heir Kitty presented herself to the favorite as the one she would have to beat if she wanted to win the La Brea.

Sweet Lulu fought on, but Heir Kitty was too good on this day. In only her third start on dirt, and her first in a sprint, the bay daughter of Wildcat Heir methodically powered on by, and scored by 1 ¼ lengths on the Santa Anita wire. The victory, completed in 1:21.47, marked her 4th, and most important, in 14 lifetime starts. Multiple graded stakes winner Executiveprivilege got up late to be a non-threatening third.

Even earlier on the Opening Day card, the well thought of Five Palms rallied strongly from dead last to win the day’s 4th race going away by a length-and-a-quarter. In earning his second win in three starts, the Bob Baffert trained son of Unbridled’s Song looked the part of a soon to be stakes horse. Final time for the six furlongs in the optional claimer was a sparkling 1:08.28