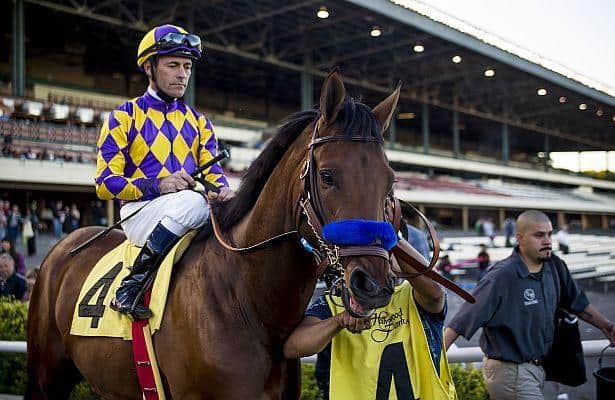 In watching and rewatching countless replays of races of possible 2014 Kentucky Derby contenders (I know it’s a tough life, isn’t it?), I’ve come to the conclusion that Candy Boy is one of the more intriguing sophomore colts out there. He’s yet to make his three-year-old debut, but that will change in a matter of days, when he goes to the post in Saturday’s Grade 2 Robert B. Lewis Stakes.

I first became aware of the John Sadler trained colt in his third lifetime start when he finished runner-up to the impressive winner of the race, Tap It Rich. He was only second best that day, but ran greenly, and finished full of run while well clear of the rest. That effort at Santa Anita remains his only effort as of yet on dirt, a surface he will be reunited with in the Lewis. The improvement in that one was furthered when he came back in his next start, routing the field  by more than eight lengths in a 1 1/16 mile maiden special weight over at Hollywood Park. While I liked the way he finished off both of those races, it was in his fifth, and final start, of his juvenile season that was the biggest tip off to his deep well of talent.

Falling well behind early, the Candy Ride colt had only one horse beat in the large field of the Grade 1 CashCall Futurity, and that was the struggling and aforementioned, Tap It Rich. Now, I don’t meant to overstate this, but the move he made on the backstretch was a little Secretariatesque. No, no … I am not suggesting that he will win the Belmont Stakes by 31 lengths someday, but we all remember the sudden burst of speed the great one made on the first turn of the Preakness. Well, the backstretch explosion of Candy Boy reminded me of that move if just a little. See for yourself…

The powerful move was obviously too early for this young juvenile to maintain, and he was dismissed of by Shared Belief, but again, he still finished well, and was able to come in second against solid horses.

First off, you don’t see horses make a move like that - tenth to first in a quarter mile - against good horses, unless you have some serious talent. Secondly, it is worth noting that his Hall of Fame rider, Gary Stevens, was on him for the first time in the Futurity, and has since been getting on him in the mornings. My guess is Gary liked what he had that day in the C R K Stable owned bay.

With the wily veteran in tow, Candy Boy has laid down a series of good looking morning moves, suggesting the improvement he has demonstrated in each of last three runs is still on the upswing. It sure looks like it will be all systems go on Saturday.

In the Robert B. Lewis, I fully expect Midnight Hawk to go favored, and the undefeated son of Midnight Lute certainly could win, but my pick will be Candy Boy. He may have won only won once in five tries at two, but I think Gary Stevens may be sitting on a good one in the sweet looking son of Candy Ride.