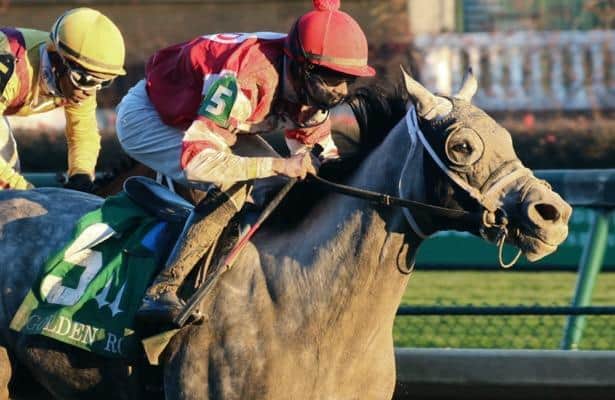 When Larry Best plucked a gray yearling filly by Frosted out of the 2019 Fasig-Tipton Saratoga Select, he said the “physical matched the promise” of his new expensive purchase. It took $850,000 to get her, the highest amount paid for any offspring of the freshman sire, but the beautiful filly with the hefty price tag already is paying dividends.

As Travel Column roared down the Churchill Downs stretch on Saturday, it was difficult to see the beauty that Best had fallen for 15 months earlier. She was covered from head to toe in dirt. Her journey in the Grade 2 Golden Rod had been anything but easy.

Breaking a half-step slow, as she had done in her stakes debut when finishing third in the Alcibiades (G1) at Keeneland, the second choice in the field of nine was squeezed back to last early in the 1 1/16-mile test.

Travel Column stayed at the back of the pack and on the rail for much of the early part of the race, looking like anything but a budding star. Ridden patiently by Florent Geroux, though, the pair began to move forward while in between horses on the backstretch.

On the turn, it appeared that the Brad Cox-trained filly was full of run, but with a pack of fillies bunched ahead of her, Travel Column had nowhere to go. Just off the rail and in between horses, Geroux looked for an opening multiple times toward the inside, but the wall of fillies was unrelenting.

Finally, the France native, having a strong sense of what he had under him, snatched up his mount and steered her quickly several paths to the outside. At long last, the gray filly had room to run.

At the 16th pole, another promising young filly named Clairiere had put away the rest and looked like a great bet to collect her first stakes victory. Travel Column had other ideas.

It took her a few strides to get rolling after her right turn in mid-stretch, but when she did, the result was electrifying. Flying by the last filly standing in her way, Travel Column scored an improbable victory. On the wire, she was a length ahead, winning going away.

#5 Travel Column overcomes a squeezed start and traffic trouble to run down #6 Clairiere in the Golden Rod (G2) at @ChurchillDowns.

Out of the multiple stakes-winning Victory Gallop mare Swingit, Travel Column is a half-sister to Neolithic. The son of Harlan's Holiday earned more than $2 million while finishing third in a trio of Grade 1 races (Pegasus World Cup, Dubai World Cup and Woodward) three seasons ago. That, coupled with her looks, made Travel Column a very attractive commodity at Saratoga in the summer of 2019.

Entrusted to one of the top young trainers in the business, Cox got her to the races for the first time in early September. Also under the twin spires of Churchill Downs, she was sent off at 9-2 odds in a full field of 12 maiden fillies going six furlongs.

Third in the early stages of that debut, she waited off very fast early fractions before rushing up to contend into the turn. Joining the lead at the top of the stretch, Travel Column burst clear and sailed home a first-out winner by 4 1/2 lengths in racehorse time of 1:10 flat.

Placed at the deep end of the pool just four weeks later, she was a bit flat after a slow start in her stakes and route debut and finished a non-menacing third in the Alcibiades. Defeating her that day was Simply Ravishing, who was made the race favorite in Saturday’s Golden Rod.

Showing serious improvement in her second start around two turns, Travel Column turned the tables on that one emphatically and now has a record of two victories from three starts and earnings of $209,184 for Larry Best's OXO Equine. Of course, those numbers mean very little when compared with the potential of this Frosted filly.

Her victory in the Golden Rod displayed everything you might want to see from a young horse. Travel Column overcame heaps of trouble to beat a quality field of young fillies, and she did it in a time that was more than half a second faster than the males would run two races later when Keepmeinmind won the Kentucky Jockey Club (G2).

For my money, this was one of the most impressive races run by any juvenile in 2020. Travel Column certainly looks to have a bright future. The win in the Golden Rod earned her 10 points on the Road to the Kentucky Oaks. That race is a long way away, but this is one filly who looks to be on the fast track to the first Friday in May.