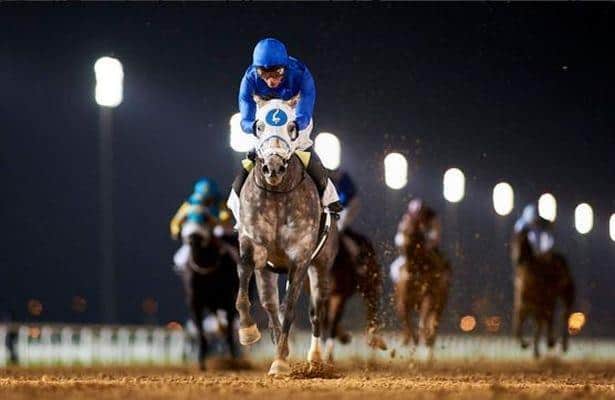 The renaissance of Frosted has begun.

It’s not exactly a new career for Frosted, but there were enough firsts in his race today to bring with it a whole blast of renewed excitement about one of the world’s best horses. It was his first start as an older horse. It was his first start outside of the United States, and in Dubai, to be more specific. And finally, it was his first start in the post-American Pharoah era. Everything went beautifully. The battle tested son of Tapit galloped in his first test at Meydan, with a flashy victory in the (UAE-2) Al Maktoum Challenge - Round 2.

In his first prep for the $10 million Dubai World Cup on March 26, Frosted quickly became involved in a three-way scrum near the front end. Ridden by William Buick, the two-time winner of million dollar races back in America, stayed closed to the early lead of Munaaser, with Prayer for Relief just to his outside flank. Frosted was content to stay within a length of the early leader, and in between horses, as Munaaser reeled of comfortable quarters of 12 and change.

The order remained the same into the far turn, but as the leader and the third place Prayer for Relief began to be asked for their best, Frosted easily cruised right up to the front at the top of the lane. His overmatched early competition stayed with him for a few strides, but as soon as the Wood Memorial and Pennsylvania Derby winner changed leads, the race was put away in a matter of a few jumps. The Kiaran McLaughlin trained star quickly accelerated away from his competition and cantered home a romping winner.

The final time of 1:56.67 easily broke the track record at Meydan for the distance of 1,900 meters. With the victory, the Godolphin runner raised his career mark to 14-4-6-1, but more importantly, in his first race since last year’s Breeders’ Cup Classic, Frosted passed his initial test at Meydan with absolute flying colors.

California Chrome, the 2014 Horse of the Year, remains the favorite for the world’s richest race, now less than two months away, but today Frosted threw down the gauntlet as a major contender for the Dubai World Cup.