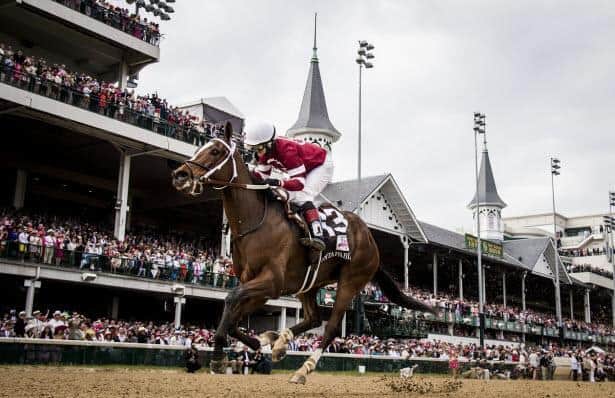 California Chrome Proves it to the World

I’ve heard a few grumblings in the last 36 hours that California Chrome’s Kentucky Derby wasn’t fast enough. Foolishness I say! I was admittedly skeptical going in, not concerning the obvious talent of the son of Lucky Pulpit, but rather whether what he was doing against smaller fields at Santa Anita, while running shorter distances, would transfer over to everything that is unique about the Kentucky Derby. California Chrome put those worries to rest in spectacular fashion on Saturday. He had enough speed and agility to gain perfect position heading into the first turn, avoiding the worst of the pin-balling going on behind him. He was tractable enough to wait for as long as Victor Espinoza wanted, so that when the button was ultimately pushed, he still had plenty of horsepower in the tank. As he glided effortlessly to the lead coming out of the far turn, with Samraat connected to his hip, it was still any horse’s race. Not for long. Espinoza asked, and Chrome replied in kind, just as he has done all year. In summation, California Chrome was much the best in America’s biggest race.

Untapable is Too Much Filly in the run for the Lilies

If Chrome was much the best in the Derby, what was Untapable in the Kentucky Oaks? I don’t know about you, but from my perspective, she looked like the best horse in the race every second from starting gate to the wire. Her stride is fluid and long, and she has a sort of elegant powerfulness to her. Doesn’t that sound familiar to another Kentucky Oaks winner from a few years back? Hey, I am not going there yet, but Untapable is an exciting talent that very well could be the best three-year-old of either gender. No disrespect meant to the Derby winner, but it is pretty clear after her Kentucky Oaks stroll in the park, that she is too much for her female competition right now. In fact, I must admit that I am a bit surprised that her connections aren’t pulling the trigger, paying the supplement fee, and sending their fantastic filly straight to Baltimore for the Middle Jewel. California Chrome vs. Untapable truly would be a battle of the sexes that would titillate a nation. I can understand why her connections have opted out, though … plenty of time for Untapable to prove that she can handle the boys. There sure is no longer any question that she’s the best three-year-old filly in the land.

Wise Dan Would Not Lose

I’m getting a little sick and tired of any negativity directed at Wise Dan. As a younger horse, he ran in sprints and distance races, and on turf and dirt. In his later years, he has become primarily a middle-distance turf horse (see Goldikova and Frankel.) If you say his connections are not challenging him enough … Get over yourself! Appreciate the Dan, before it is too late. Now that has been said, I also feel the need to address those who have mentioned that Wise Dan is slowing down because while winning yet another Grade 1 on Saturday, his winning margin was only a head. I wonder what these same people would have said about Forego back in the day? I thought his performance on Saturday was fantastic. You all saw what I saw before the first turn, right? Horses giving weight to a grade 1 field, do not have the trouble that he did in the first furlong, and win very often. It is just too tough. Seek Again looks the part of a real turf star in the making, and when the rail opened up in the stretch for him to surge through, it took a very special horse to best him to the wire. The Dan is just such a horse. I’ll say it again … appreciate him now, before it is too late.

I don't want to step on the toes of the work our excellent European correspondent, Dan Munn, has already done with these, but as a fan of international racing, I would be remiss in not making mention of the first two English Classics of the year. First on Saturday, It was Night of Thunder taking it to a pair of highly regarded colts in the English 2,000 Guineas. I urge you to watch the race replay on Across the Pond, because the Newmarket stretch run of this race is unlike anything you will ever see in the United States. It was a great finish, and the way Night of Thunder defeated Kingman and Australia is really a must watch. The track announcer should be due double pay on this one ... go ahead watch it, and then come back here to read on. Next on Sunday, (they reverse the order over there), it was the fillies turn, and more specifically, it was time for Miss France to shine. In another great finish, the French invader just got the best of a fast closing Lightning Thunder for the second time in their brief careers. They will likely go there separate ways for now, but hopefully this rivalry is not over.

Midnight on the Track of Good and Evil

One thing I love about the two-day Oaks-Derby extravaganza at Churchill Downs are all of the wonderful supporting stakes before the three-year-olds take center stage, and as always, they did not disappoint. On Fire Baby, Moonshine Mullin, Central Banker, and Fiftyshadesofgold were all at their talented best while winning graded stakes on Friday and Saturday respectively, but it was Midnight Lucky who most caught my eye in the 'other' stakes. Making her first start since dominating the Grade 1 Acorn nearly a year ago, Midnight Lucky ran away and hid from a solid field of sprinting fillies that included Judy the Beauty. It was like she had never been away at all. I don't know if she is ready for the marvelous trio of four-year-old fillies; Beholder, Princess of Sylmar, and Close Hatches, but after seeing her up close on Saturday, I certainly cannot say that she isn't a threat to give them everything they want in the Ogden Phipps next month at Belmont Park. If all four make it into the starting gate that day, it will be one of the races of the year.

You've heard me talk about him a lot in the last few years, but things are getting more serious now. I really believe that Fury Kapcori is becoming the type of horse that I hoped he might become back as a juvenile. Swallowed up by the goings on at Churchill Downs was another strong performance for the good looking four-year-old son of Tiznow. Making short work of the Grade 3 Precisionist field, Fury Kapcori went straight to the lead on his way to blitzing the field by nearly six lengths. It was his fourth straight win, possibly his best yet, and should be the signal that he is now ready to take his new confidence against the top older males in the sport. He would make a great addition to an already loaded Met Mile cast for instance. One day later, Nashoba's Gold was equally impressive out West while doing her thing on the Santa Anita lawn. In winning Sunday's Grade 2 Honeymoon in easy fashion, she earned her third win in only four starts. The time may not have been anything to write home about, but she gives me the impression of a filly just toying with her competition at this time, and in each race, she only looks better. A half sister to the wonderful, but ill-fated mare, Nashoba's Key, I fully expect this one to be well on her way to completing some unfinished family business.

Bring on the Crab Cakes

There are likely to be changes to the field over the next several days, but here are my early odds for Preakness 2014: