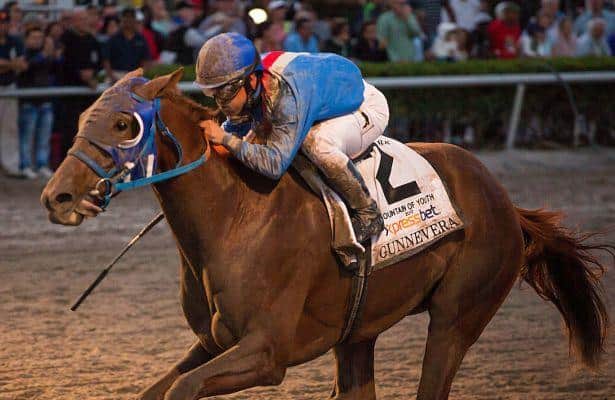 From Nashua to Nyquist, and all the great horses in between, the tradition of the Florida Derby is a grand one. There may be no horse in this year's million-dollar edition quite like past Florida Derby winners; Northern Dancer, Alydar, or Spectacular Bid, but Saturday's running of the Grade 1 Florida Derby certainly has the potential to bring the Gulfstream Park race its fourth Kentucky Derby winner in the past ten years. Let's look at the field of eleven, with my analysis and projected odds.

11) Gunnevera (4-5) - There can be no looking past the smashing winner of last month's Fountain of Youth Stakes. A legitimate contender for the Kentucky Derby, the leggy son of Dialed In looked the part in winning last time going away. Still, as a confirmed stretch runner, his fortunes depend on the early pace, or lack thereof. Unlike the Fountain of Youth, this one might not offer a strong pace, which could make the favorite's task a little more difficult. The three-time graded stakes winner should appreciate the added distance of the nine-furlong Florida Derby, and clearly has a class edge, so he could win despite a slow pace. He does not need to win here for trainer Antonio Sano to fire big on the first Saturday in May, so beware at low odds. Should Be Along In Time

4) Always Dreaming (7-2) - Another lightly raced colt from the loaded barn of Todd Pletcher. A half-brother to Hot Dixie Chick, by Bodemeister, this one looks to be a serious talent. After two solid sprints as a two-year-old, the dark bay colt has thoroughly dominated his maiden and allowance competition at Tampa Bay Downs and Gulfstream Park respectively. Both of those wins this year came at two-turns, which should give him the bottom he needs as he steps up in class. John Velazquez will need to decide when to go after the speed, so that he has enough horse to hold off the favorite late. Working like a very good thing, Always Dreaming has a big shot to pull of the upset on Saturday. The Main Competition

10) Three Rules (6-1) - Despite coming in on a three-race losing streak, this speedy son of Gone Astray remains a dangerous commodity. While he was absolutely no match for Gunnevera in the Fountain of Youth, this race could provide an easier pace, making him a much braver foe in the lane, in what will be his third race off the layoff. The ultimate success of the multiple stakes winner may depend on how long some of the others leave him alone early, but no matter what, quality speed like his is always a threat. The One To Catch

1) State of Honor (8-1) - Blinkers off for the Mark Casse trained colt, who has proved to be quite game in four consecutive stakes races, the last two coming against top colts at Tampa Bay Downs. The equipment change leads me to believe that he will lay off Three Rules early, which could help that one. A solid and consistent horse, the son of To Honor and Serve has just not come close enough to beating top horses, for me to believe in his chances on Saturday. It looks like another race where he is likely competing for the lower spots in the exotics, rather than winning. Consistent Competitor

8) Impressive Edge (15-1) - An impressive winner of two of his last three, the improving son of Harlan's Holiday gets a shot against the big boys in the Florida Derby. His only previous start in stakes company was a well beaten fourth-place finish in the Grade 2 Hutcheson. Has he moved forward enough to make noise on Saturday? It's not out of the question, as the son of Harlan's Holiday stretches out in distance for Dale Romans, but it would need to be a substantial move forward to contend for the win. Needs Improvement

2) Talk Logistics (20-1) - The good news is that he has hit the board in four straight stakes races after breaking his maiden in his career debut. Unfortunately, the last two seem to be clear indicators that competition like Gunnevera is a little bit out of his comfort zone. Beaten by 14 and 12 1/4 in his last two, I cannot see him turning the tables this time around. Needs Class Relief

6) Coleman Rocky (30-1) - The Gustavo Delgado charge exits three consecutive races on the turf, where he has enjoyed only marginal success. Before that, he was nowhere in two tries on the main track. With only a rather slow maiden win on the grass at Aqueduct to show from five starts, it's hard to like his chances in here. Dirt Form Not Good

7) Unbridled Holiday (30-1) - He was in that allowance race won by Always Dreaming, and was no match at odds of 22-1. In seven career starts, his only win came against maiden statebreds. Can't see him making much noise in here. Tough Spot

5) Quinientos (50-1) - Nearly 200-1 in the Fountain of Youth, the son of Sky Mesa at least finished ahead of a few. Having said, I'm not sure why they would want to try this type of competition again. Long Odds Again

3) Charley the Greek (50-1) - He does have a decent enough record locally, but those came against much cheaper. There was a reason why he was 83-1 against Always Dreaming last time. No thank you. Overmatched

9) Battalion Runner - Not Likely to Run