Flintshire sheds seconditis in the U.S.A. 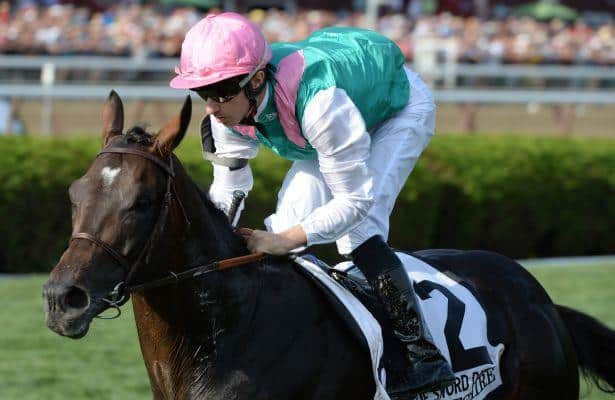 Flintshire, the fantastic Juddmonte Farms' homebred, will make his return to the Spa on Saturday as the overwhelming choice in a field of five set for the $250,000 Bowling Green Handicap. Winning the Grade 2, to be contested at 1 3/8 miles on the inner turf, almost seems like a foregone conclusion for the horse who has actually finished runner-up in exactly half of his lifetime starts. That is how much respect the now U.S. based horse has collected from his two most recent American starts.

You’ll remember the last time the globetrotting six-year-old came to Saratoga. It was 11 months ago, and at that time, he was still trained by the top French conditioner, Andre Fabre. It was also his second race in the United States, having finished a very good second to Main Sequence in the 2014 Breeders’ Cup Turf. Despite coming to the Spa off four straight defeats, none of them were bad losses, mind you, but still four consecutive races in which he failed to make it to the winner’s circle, Flintshire was made the heavy even-money choice in the Grade 1 Sword Dancer. The performance he turned in, that late August afternoon in Upstate New York, was downright explosive.

Take note of the final quarter mile of this 12-furlong marathon. Flintshire, after already having traveled ten furlongs, and having already surged to the lead, sprinted home in :22.30. It is little wonder that the rest of the field had no chance against the horse carrying the familiar green and pink silks of Juddmonte. Poor Red Rifle ran the race of his life, but could do little more than chase the winner’s tail. Still trained by a Frenchman, Flintshire was sent back to Europe for a pair of important dates overseas.

Flintshire was unable to build upon his one-race winning streak in America, after his return to France. He followed up his big Sword Dancer win with a second-place finish in arguably the world’s most prestigious turf event, beaten by only the champion Golden Horn in the 17-horse field of the Prix de l'Arc deTriomphe at Longchamp. He was favored in his only other start of the year, the Group 1 Hong Kong Vase, but was defeated there, finishing second to another classy globetrotter in Highland Reel.

It was another strong year for Flintshire, but one that only resulted in one win (five times second) in seven 2015 starts. Believing that the amazingly consistent turf star could do better, considering the firmer ground and the faster pace generally found in U.S. turf racing, Juddmonte made the decision to transfer the dark bay to the barn of trainer Chad Brown. Recognized as a master trainer on the turf, it was thought that together they could have a banner year in America. So far, so good.

Making his initial start of the season in front of a large Belmont Stakes Day crowd, Flintshire wowed them at the Long Island oval. In his first start in six months, and for Brown, he turned the Grade 1 Manhattan Handicap into another highlight reel type of performance. Do not be fooled by the 1 ¾-length margin; this was easy -- easy and electrifying.

Treating many of the best grass horses in the United States like in the way, orange traffic cones, Flintshire inhaled the field down the Belmont Park stretch. Once again, I direct you to the time for the final quarter mile as proof of what his competition is dealing with when facing Flintshire on American turf. The Manhattan's final two furlongs were run in a blazing :21.83, and Flintshire wasn’t even on the lead at the quarter pole. Still two lengths behind at that juncture, it means he ran his last quarter mile in just under 21 ½ seconds. In a ten-furlong race, that’s kind of unreal.

On Saturday, look for Flintshire to improve upon his lifetime record of six wins, ten seconds and a third from 20 starts, with more than $8.1 million in the bank, as the Bowling Green seems like little more than a speed bump for the best male grass horse in the land. Sit back and enjoy the show, as he works toward the ultimate goal of the $4 million Breeders' Cup Turf at Santa Anita on November 5.