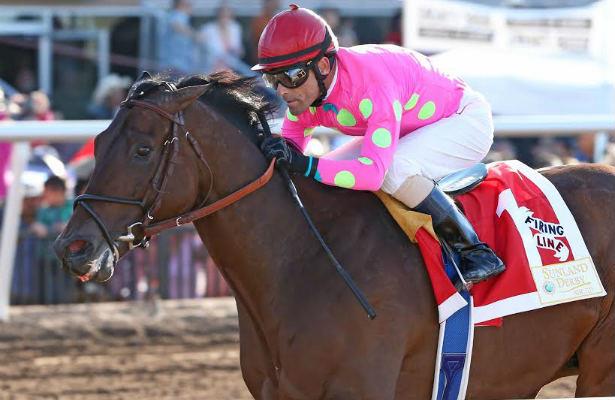 To the winners go the spoils. While American Pharoah was running into America’s hearts down the middle of the Churchill Downs’ track, there was another horse who ran an excellent race on the most recent first Saturday in May. What about him? He didn’t always win, but there can be no denying that Firing Line was one of the most exciting young horses in the land last year. Most will remember the son of Line of David as the horse who gave the soon to be Triple Crown winner everything he wanted in racing’s most prestigious race, the Kentucky Derby. His narrow defeat was a memorable performance to be sure, but his run in the Derby was no fluke. Firing Line ran nothing but strong races from the beginning.

The Arnold Zetcher owned bay finished first or second in each of his first six starts. After breaking his maiden in romping fashion, the inexperienced colt was thrown right into the woods against a pair of Bob Baffert trained wolves. Out of that second-out victory in a maiden sprint, Firing Line battled down to the wire in the Grade 1 Los Alamitos Futurity, only to lose the head-bob to the imposing Dortmund. Those two would tangle again in their next race, and once again, it was Dortmund who earned a hard-fought, photo-finish victory over his rival, while the rest of the field struggled more than 20 lengths behind the big two. There would be only one start between the Dortmund donnybrooks and his big Derby run, for Firing Line, and that would come in the $800,000 Sunland Derby. Showing off his class, he won by 14 ¼.

I had the opportunity to chat about Firing Line recently with his trainer Simon Callaghan. The young British ex-pat has made a name for himself in Southern California since arriving to the States several years ago. He has conditioned a number of graded stakes winners, including Dubawi Heights, Byrama, Slim Shadey, Fashion Plate, and Taris, but it was with Firing Line that the 33-year-old almost won the big one.

“He ran fantastically well in the Derby,” said Callaghan “He had a nice post and everything unfolded just how we hoped. He was in a pretty good spot all the way. He was just outrun by a better horse on that day … and look what that one became.”

So where has the horse who ran all these good races been since the Derby? Well, a big storm and a sloppy Pimlico track did no favors to the Preakness second choice. Firing Line was clearly not himself and finished up the track. “He came out of the Preakness a little sore,” Callaghan told me. “It was nothing too major.”

Unfortunately, the sore foot lingered, and his connections started making plans for 2016, rather than trying to rush him back to the races late last year. “We didn’t want to take unnecessary risks with him,” said Callaghan. We decided to give him time, be patient, and look forward to a four-year-old campaign.”

At long last, Firing Line is back on the track and preparing to make his long awaited comeback. “He’s been jogging for over three weeks, and he’ll do that for one more week,” said Callaghan. “Then he’ll gallop for four weeks, so we are looking at about five weeks from his first work. His first real goal is the Pacific Classic, and then the Breeders’ Cup [Classic] at the end of the year.”

So the horse that Callaghan calls “definitely” his best dirt horse to date, is still a few months away from his first race. His trainer says ideally he’d like to get in two starts in preparation for the August 20 Pacific Classic at Del Mar. “I wouldn’t mind bringing him back in an easier spot, and get him a win,” said Callaghan. “Possibly an allowance, or a small stake. Probably one at Santa Anita, and then one at Del Mar.”

After the excitement he brought us last year, I think I speak for the collective, when I say we are eagerly awaiting the return of last year’s brave Kentucky Derby runner-up.