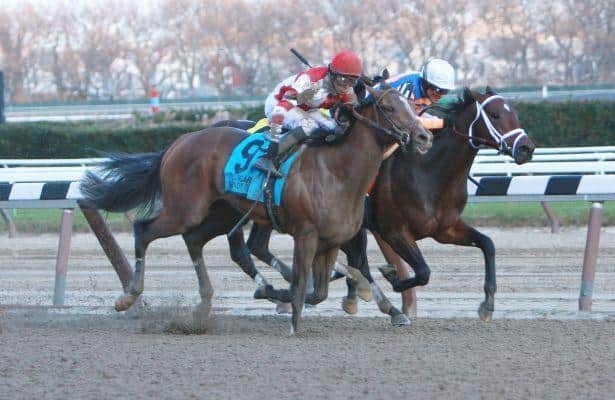 Between them they’ve only won five total races, and zero graded stakes. Still, I believe few would argue the major talent within either Fast Anna or Normandy Invasion. Besides the as of yet unfulfilled talent reservoir both horses possess, they also have in common returning from sizable layoffs to make it back to the races recently for their first respective starts of 2015. Of more immediate interest, Fast Anna and Normandy Invasion also will be looking to add some supporting fireworks to a strong card Saturday at picturesque Delaware Park.

There are not many faster sprinters in America than the Kathy Ritvo trained, Fast Anna. The four-year-old son of Medaglia d’Oro and the champion Dreaming of Anna was unraced as a juvenile, and only ran five times as a three-year-old, yet he was still able to prove his big time early foot without a shadow of a doubt. He outclassed maiden and allowance foes at Gulfstream Park to begin his career, before throwing down this huge performance in the Grade 1 King’s Bishop in only his third career start …

He came back to run second to Favorite Tale in the $300,000 Gallant Bob, and fifth to Work All Week in the Breeders’ Cup Sprint. They weren’t winning performances, but neither did much to lessen my belief in his serious talent. After seven-plus months off, Fast Anna came back to wire the Sawgrass Stakes at five furlongs on the Gulfstream Park turf course, five weeks ago. With that tightener under his girth, he should be ready to roll on Saturday.

In the Hockessin Stakes, which goes as race 8 at Delaware on Saturday, Fast Anna will have to tangle with Stallwalkin’ Dude, Bourbon Courage and five others going six furlongs on the main track. Clearly this race has come up much stronger than your average $50,000 stakes race, and in fact, the excellent 2015 form of Stallwalkin’ Dude has relegated Fast Anna to second choice on the morning line.

Three races later, and on the other side of the day’s featured event, the Carl Hanford Memorial has ten older males going 1 mile and 70 yards, and features Normandy Invasion, making only his second start since last year’s Met Mile. Now trained by Delaware Park regular, Larry Jones, the five-year-old son of Tapit has long been thought of as a potential major player on the American racing scene, only to be thwarted by tough beats and physical setbacks.

At this point in his career, and returning after a second long layoff, it now becomes put-up or shut-up time for Normandy Invasion. Unfortunately, his comeback has not gotten off to a flying start.

A recent optional claimer at Delaware Park, with only three horses, resulted in a rather shocking loss for Normandy Invasion. At 3-10, few expected the defeat, but the performance was not all bad, as the winner, Our Caravan, ran big, and the Fox Hill charge was understandably a little tired late in the race. He did earn a reasonable 93 Beyer for the effort, so improvement in his second time out should see him a lot closer to the horse that ran 1:33 flat for a mile last year at Gulfstream Park. Or perhaps closer to the horse we remember making this huge, but premature move in the 2013 Kentucky Derby ...

Can Fast Anna and Normandy Invasion live up to their press clippings and win only their second and third combined stakes wins on the Delaware Handicap undercard? I think so. I like both of their chances on Saturday, and each will be my top pick.

More importantly, can they use their respective assignments at Delaware Park as a springboard to bigger and better things -- perhaps even leading to big engagements like the Breeders’ Cup Sprint and Breeders’ Cup Dirt Mile? Call me an optimist if you must, but again, I like their chances. I have seen what each of them can do on their best, and I’d like to believe that both big talents still have bright days ahead. First things first, though, let’s see what they can do on Saturday.