Farrell could be challenged on her way to the Kentucky Oaks 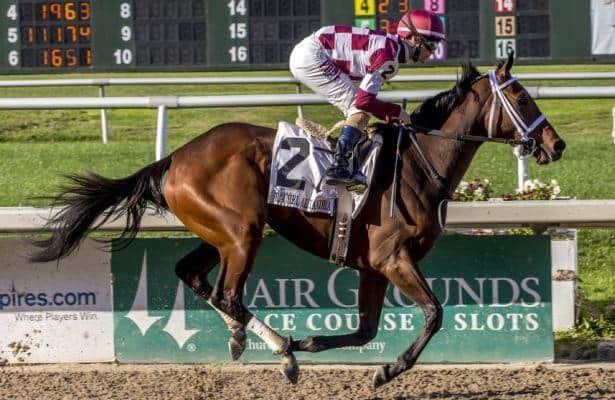 With the unfortunate news that Unique Bella will miss some time due to a sore shin, the 2017 Kentucky Oaks has suddenly become a wide open race. Abel Tasman and Farrell each move up one spot on my rankings to now become the top two. The former will get her final prep in next week when she takes to the track for the Santa Anita Oaks on April 8. Farrell, on the other hand, has a more immediate task, when she headlines the field for Saturday's $400,000, Grade 2 Fair Grounds Oaks.

8-5 on the morning line, make no mistake, Farrell is a deserving favorite. A winner of three straight stakes for trainer Wayne Catalano, the Coffeepot Stables filly has dominated her competition with a high cruising speed that gives her supporters hope that she can carry her speed for as far as she needs to. The well bred daughter of Malibu Moon is a half-sister to the Grade 1 winner, Carpe Diem. She also heads to this weekend's test well versed over the Fair Grounds main track, having taken her last two, in the Silverbulletday and Rachel Alexandra, locally. It would seems all systems are on go for the May 5 Kentucky Oaks.

Before Farrell heads to Louisville as a favorite for the lilies, though, she will need to get the job done in race that has crowned such stars as; Silverbulletday, Ashado, Take Charge Lady, Proud Spell, Rachel Alexandra, and Untapable. Farrell certainly appears to be a filly up to the task, but there is one competitor in the Fair Ground Oaks that could prove vexatious for the favorite.

While Farrell is clearly a filly at the top of the division, Vexatious is an unknown quantity -- unknown, but extremely intriguing.

Trained by Neil Drysdale, Vexatious is the owner of one of the more interesting pedigrees of her foal crop. Farrell is not the only filly in the Fair Grounds Oaks with a famous sibling ... or two. By Giant's Causeway, out of the Siberian Summer mare, Dream of Summer, the lightly raced Vexatious is a full sister to a pair of highly successful big brothers.

Creative Cause and Destin were both top colts who made it to the Kentucky Derby with a shot. Neither were able to get the job done in the big one, but both proved on numerous occasions that they were top class runners. Being a full sister to both Creative Cause and Destin does not guarantee that Vexatious will be a graded stakes winner, but her early performances certainly bring plenty of reason to be excited.

In two starts at two in Southern California, she showed plenty of potential. In her debut, Vexatious came out in the stretch to rally from way back, and get up for third. The winner of that maiden sprint, Shane's Girlfriend, became a graded stakes winner in her next start. In her other 2016 start, Vexatious stretched out to a mile, and got up for the win in a Del Mar maiden. The filly she edged out that day, Majestic Quality, ran second behind Farrell in the Rachel Alexandra Stakes, and is also in the Fair Grounds Oaks.

In her first start as a three-year-old, the Calumet Farm owned Vexatious had anything but an easy trip. In fact, her trip was downright ugly from a racing luck standpoint. Still, she was able to rally for third in her first start in more than three months. Despite the trip, the third-place finish in an optional claimer at Santa Anita might not seem that exciting at first glance, but when you consider who finished ahead of her, the performance looks a whole lot better. It was a race for males, and the top two, Battle of Midway and Reach the World, are both highly regarded young colts, and both headed for next week's Grade 1 Santa Anita Derby.

Farrell looks like the real deal, and will undoubtedly be the one to beat on Saturday, but in Vexatious, she may be facing a filly ready to announce herself as the real deal, as well.

VEXATIOUS is hungry to live up to brothers DESTIN & CREATIVE CAUSE in tomorrow's FG Oaks pic.twitter.com/6pkEqoaPWZ