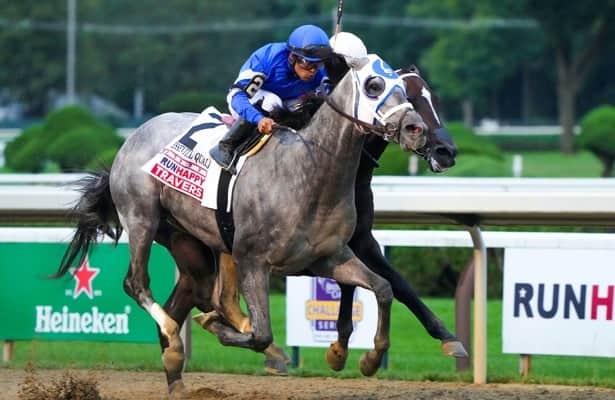 Only four horses in the 37-year history of the World Championships have won two different Breeders’ Cup races. In less than four weeks at Del Mar, there will be three horses with a big shot to add their name to the noteworthy list.

A third horse who can become a winner of two different Breeders’ Cup races this year is Golden Pal, and he might be the most likely of all. The five furlongs of this year’s Turf Sprint would seem to be right up the uniquely talented 3-year-old’s alley.

Looking back, the most memorable of all to accomplish the feat was, of course, Zenyatta. The great mare was most impressive in winning the Distaff (then called the Ladies’ Classic) at Santa Anita in 2008 and the Classic at the same track the following year. Beating the boys as she did in 2009 was groundbreaking, but she came tantalizingly close to doing it again the following year on the dirt at Churchill Downs. That narrow defeat to Blame was her only loss in 20 career starts.

And we can never forget Beholder, who holds a very special place on the list as well. Not only is she one of the four to win two different races, having won the Juvenile Fillies in 2012 and the Distaff in 2013 and '16, but the daughter of Henny Hughes also joined Goldikova as the only two horses to have won three times at the Breeders’ Cup.

Essential Quality does not blow away his competition, but the gray son of Tapit has a way of grinding down his competition in the stretch. The 2-year-old champ of 2020 remains the leader of the pack of a very solid group of 3-year-olds, with consecutive victories in the Belmont Stakes, Jim Dandy Stakes (G2) and Travers Stakes (G1). Trained by Brad Cox, he has had to work for those victories, but his rally has proved irresistible.

Essential Quality would own a spotless career record if not for a tough defeat in the Kentucky Derby. A winner of five stakes races this season, he is close to clinching another Eclipse Award, but there is still work to be done. Although he has faced a demanding schedule this season, he has yet to face older horses. He has proven capable at the Classic distance, and now he must prove he can beat the best of the older horses as well.

Meanwhile, his stablemate Knicks Go has made things look easier and likely will be the favorite to carry his speed the full 10 furlongs of the Breeders’ Cup Classic. An impressive winner of the Breeders’ Cup Dirt Mile last year, he has been even better in 2021. After keeping his winning streak going with a decisive victory in January’s rich Pegasus World Cup (G1) at Gulfstream Park, the Maryland-bred son of Paynter suffered consecutive losses in Saudi Arabia’s Saudi Cup (G1) and Belmont Park's Metropolitan Handicap (G1).

That losing streak did not last long. He returned to his winning ways with an overpowering and confidence-building runaway in the Cornhusker (G3) at Prairie Meadows. Rolling on the lead, Knicks Go has looked like the best horse in America with subsequent big wins in the Whitney Stakes (G1) and last weekend’s Lukas Classic (G3).

Just like his Cox barn mate, the Breeders’ Cup Classic will present new obstacles, though. Knicks Go looks to beat the best at a distance (10 furlongs) in which he is unproven while facing other quality speed.

Essential Quality and Knicks Go will battle it out against each other and a tough field in the Classic, but the Wesley Ward-trained Golden Pal will enter a different type of race in the five-furlong Breeders’ Cup Turf Sprint. The winner of the Juvenile Turf Sprint last year at Keeneland was so impressive that you had to wonder how he would do against the older turf sprinters. One year later, we will get to find out.

The son of champions Uncle Mo and Lady Shipman has not won in two separate trips to England, but he has been dominant on the American turf. Since running a game second in his career debut, which was his only race on dirt, Golden Pal has steamrolled his competition on the grass. Four consecutive stakes wins have been won the last two seasons with a devastating display of speed. He prepped for the Turf Sprint with another impressive victory Saturday in the Woodford Stakes (G2) at Keeneland.

Besides the pair of great race mares, Zenyatta and Beholder, the two other horses who have won two different Breeders’ Cup races are Stephanie's Kitten, who won the Juvenile Fillies Turf in 2011 and came back a full four years later to be a popular winner of the Filly & Mare Turf at Keeneland in 2015, and Secret Circle, who won the short-lived Juvenile Sprint in 2011 and then came back to win the Sprint two years later in 2013.

There’s a reason that winning two different Breeders’ Cup races has been done only four times in history. To prove best at the World Championships is tough enough, and to do it in different disciplines is downright special. I wish the best of luck to Essential Quality, Knicks Go and Golden Pal as they chase history at Del Mar on Nov. 6.