Enable looks to make history in the Breeders' Cup Turf 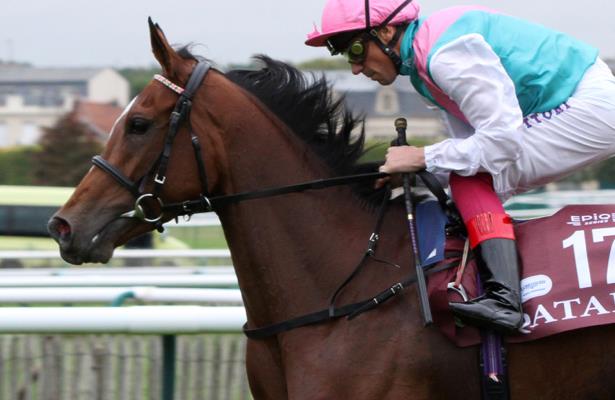 No matter what happens from here, Enable has proven herself a special filly. On Oct. 7 in Paris, France, the champion daughter of Nathaniel guaranteed her name will have its place in history by defending her title in the Group 1 Prix de l’Arc de Triomphe. In so doing, she became only the third horse in the last 60 years to win arguably the world's most prestigious turf race more than once.

What will the John Gosden-trained star do for an encore? A transatlantic flight and a quick turnaround will see Enable in the starting gate for North America's most important turf race, that's all.

Considering her record, and what she has already accomplished, the Breeders’ Cup Turf would seem to be a foregone conclusion. Yes, Enable will be heavily favored for her first race here, when she takes to American turf at Churchill Downs on Nov. 3, but there is a bit of a rub. You see, no horse has ever won at the Breeders' Cup after having taken down the Arc.

Early on in the Breeders' Cup era, Dancing Brave came to the United States as an imposing figure. His powerhouse late kick carried him to impressive win, after impressive win over in Europe, including the Arc. He was thought to be unbeatable and was made an overwhelming favorite in the 1986 edition of the Breeders' Cup Turf at Santa Anita. Less than 2 1/2 minutes after the field went on their way, the Arc winner was vanquished by the American champion, Manila.

In all, eight Arc winners have made the trip to try for the Breeders' Cup double a few weeks later. On each occasion they went down in defeat. Most recently it was Golden Horn, the golden boy of European racing, who could not get in done here in America at short odds.

So you see, expecting nothing less than an American coronation for Europe's Queen may not be easy as pie. Having said that, Enable is not your average Arc winner. That was proven two weeks ago, when she held off a furious rally by the young hotshot Sea of Class at Longchamp. The defense of title was made all the more impressive when you consider that the defending champ had only one race in between the two victories in the Arc. Forced to sit out much of the year due to a physical setback, the factor that made her title defense so difficult in Paris, might just be an advantage in the Breeders' Cup.

An impressive winner in her only start at 2 for owner Prince Khalid Abdullah, Enable was actually beaten in her first start as a 3-year-old. Quickly proving that she needed that race, she came right back to win the Cheshire Oaks in her second start at 3. From there, her career has been the stuff of legend. In her fourth start of her career, she powered home in a romping win over a strong field in the Group 1 Epsom Oaks.

Bred in England by Prince Khalid Abdullah's Juddmonte Farms, Enable is the product of the mating of Nathaniel with the Sadler's Wells' mare, Concentric. She is part Nathaniel's first crop, and her dam was produced by a full sister of Flintshire. When Enable comes to the United States, she will bring with her a career record of 10-9-0-1, having won eight straight races. Her regular rider Frankie Dettori will once again be in the saddle.

It was big news when the racing world discovered that the much heralded Enable was coming to America for the Breeders' Cup Turf. It only strengthens our year-end championships to have a horse like her participate. In a year when Justify finally put the longstanding 'Curse of Apollo' to bed, will we also see the end of no Arc victor coming over and winning at the Breeders' Cup? It would seem that Enable is just the filly to get the job done.