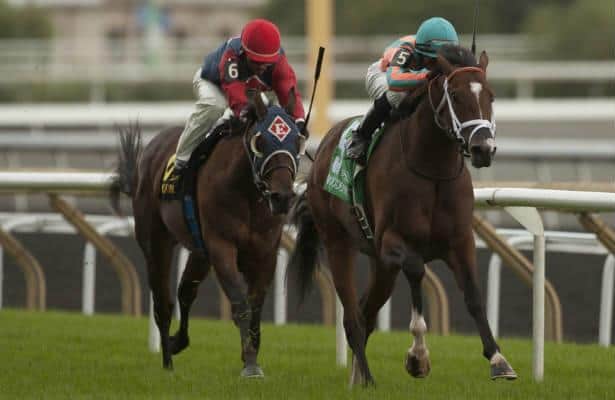 The road to the 2015 Kentucky Derby visits the Bay Area on Saturday with the Grade 3 El Camino Real Derby at Golden Gate Fields. Ten three-year-olds will travel nine furlongs over the synthetic main course, with the winner securing ten points toward entry into the starting gate on the first Saturday in May. Here’s my rundown of the field from the rail out ...

Donji - The son of Big Brown makes the trip up the coast from Southern California, but has yet to find the winner’s circle in seven tries in maiden claiming events. Hard to recommend.

Indianaughty - Team Valor brought this son of Indian Charlie back to America after a smart score over a synthetic track at Lingfield (England) last August in his second career start. His first race in America resulted in a brave victory in a Gulfstream Park optional claimer on the turf last month. Looks like a major threat for trainer Dale Romans.

Metaboss - Has improved with each start, culminating with a solid maiden special weight win on the turf at Santa Anita last month. That win came at nine furlongs, and despite just breaking his maiden, the son of Street Boss has run against some nice horses. Definitely in with a shot.

Ernest Shackleton - The Irish import has won 2-of-6 lifetime including an optional claimer last time at Santa Anita. A possibility in here, but my guess is he is cut below the main contenders.

Cross the Line - The local winner of the California Derby last month, and one of three Jerry Hollendorfer entrants in the race, is both improving, and possesses good tactical speed. Certainly one of the ones to beat, but may find the new out of town talent a little tougher than he has faced to date.

Harmonic - Another from the Hollendorfer barn, he broke his maiden in his first local start with a nice late run, after going 0-for-4 in Southern California. Needs to improve to run with these, but rates an upset possibility to at least rally into the exotics.

Soul Driver - The son of Street Boss could not run down Cross the Line as the California Derby favorite, and things should only be tougher on Saturday. Consistent good efforts probably will not be enough to break through here.

Stand and Salute - Another from the Hollendorfer barn, and another coming out of the California Derby. He finished well enough that day to be 3rd and could appreciate the extra sixteenth of a mile, but would need to really step it up on Saturday. Russell Baze in the saddle is always a plus, but still seems more likely for only a minor award.

Conquest Typhoon - The proven class of the field has run nothing but good races in six races on turf or synthetics, including a very good 4th in the Breeders’ Cup Juvenile Turf. Mike Smith makes the trip north to ride the two-time graded stakes winner, and stands a good chance of making it to the winner’s circle with the son of Stormy Atlantic.

Mischief Clem - The California-bred son of Papa Clem is coming off a career best, when winning the California Cup Derby three weeks ago. Like the race favorite just to his inside, he brings in a top jockey from the South, Kent Desormeaux for the affair. Good tactical speed, and good form in his two previous races on synthetic surfaces, help make him one of the top threats to Conquest Typhoon.