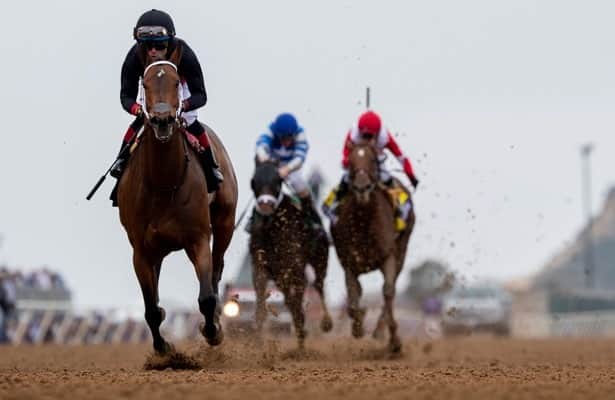 It is not a category in the Eclipse Awards, but surely if we recognized America’s best 2-year-old of either sex, it would be Echo Zulu by a comfortable margin.

With all due respect to the fine male runners Corniche, Jack Christopher and Smile Happy and their undefeated campaigns, the filly was simply better.

Certainly, her four starts in 2021 were more than enough to prove herself far superior to any other juvenile filly in the nation. Echo Zulu’s quartet of unchallenged victories were won by a combined 22 lengths. They included three Grade 1 wins at three tracks and on both coasts.

In short, she was an unstoppable force this season from her debut at Saratoga through her dominating performance in the $2 million Breeders’ Cup Juvenile Fillies at Del Mar.

In comparison to the males, not only did Echo Zulu run more than any of the aforementioned colts, but she stole the show on the biggest stage. Future Stars Friday at the Breeders’ Cup was not a coming-out party but rather further proof of her dominance. While Corniche needed 1:42.50 to complete the Breeders’ Cup Juvenile, she finished off the female counterpart in 1:42.24 under a hand ride.

Trained by Steve Asmussen, the bay filly is a daughter of the record breaking first-crop sire Gun Runner and out of the talented Menifee mare Letgomyecho. A graded-stakes winner, who retired prematurely after only four career starts, Echo Zulu’s dam had previously produced graded-stakes winners Echo Town and J Boys Echo. And of course, Gun Runner was the 2017 Horse of the Year and also was trained by Asmussen.

Sent off at 4-1 in her career debut on July 15, those odds at the Spa seem almost humorous now. Echo Zulu broke in the middle of the pack but quickly moved into contention in the 5 1/2-furlong maiden race. She stalked the favorite into the turn and took over at the head of the stretch. She rolled home a 5 1/2-length winner in sharp time and immediately announced herself a serious racehorse.

Next up came the 7-furlong Spinaway (G1), also at Saratoga and 7 1/2 weeks later. Off her good-looking debut victory, the L and N Racing and Winchell Thoroughbreds-owned runner was hammered down to heavy favoritism over eight other juvenile fillies. Despite a slight bobble at the break, she went right to the lead. Immune to the pressure to her outside, Echo Zulu cruised around the track and won by an easy 4 lengths.

Stretching out to one mile for the Frizette (G1) at Belmont Park, Echo Zulu was shown great respect by bettors in her third career start. Sent off at 3-10 in the most prestigious race in New York for 2-year-old fillies, she made easy work of the assignment.

Going right out for the early lead, she went fast all the way around and left her competition far behind. The 7 1/4-length victory left little doubt as to who was the best juvenile filly in the land, but she would have new tests in her final start of the year.

For the Breeders’ Cup Juvenile Fillies, she would need to travel to the West Coast and run around two turns for the first time. Bettors believed that she was up to the assignment, and Echo Zulu ran to her 4-5 odds.

Ridden for the first time by Joel Rosario, Echo Zulu once again was dominant in her championship-clinching test. Breaking sharply from her outside post in the field of six, Echo Zulu went right out to the lead and from there made it look easy. She set down early fractions of :23.42, :47.01, and 1:10.96 while being chased by the fillies who would take the place and show.

As good as she had looked in winning her first three starts at one turn, it was in the stretch of Del Mar where she truly proved herself a champion. The authoritative 5 1/4-length victory was easier than the final margin would suggest as Rosario was only a passenger in the final furlong.

Given a freshening after her big win at Del Mar, we now will have to wait a while before seeing what Echo Zulu can do at 3. She will stable at Fair Grounds in New Orleans as she prepares for her run at the Kentucky Oaks in May. Asmussen’s previous winners of the Oaks, Summerly in 2005 and Untapable in 2014, also wintered in the Big Easy.

You never know for sure how fillies will come back after a considerable layoff, but what we do know is that Echo Zulu proved herself a champion in 2021. She was better than the boys and on a short list of the best juvenile fillies we have seen run this century.

If she comes back better than ever in a few months, perhaps the Kentucky Derby will be considered. She is that good.