Dream It Is annihilates her Schuylerville competition 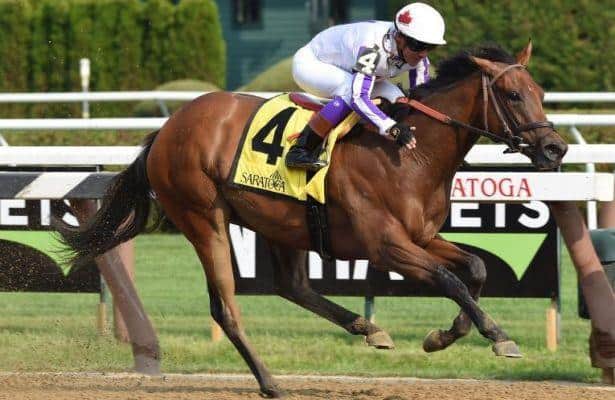 She looked good on Tapeta, but today, Dream It Is was really good on the dirt. Making her first start on the conventional surface, and her first try in graded stakes company, the daughter of Shackleford could not have looked any better in annihilating her competition by nine lengths in today's Grade 2 Schuylerville Stakes on opening day at Saratoga.

Trained by Barbara Minshall, the bay filly shipped in from Woodbine off a pair of wins, and was respected in the $150,000 co-feature at the Spa, showing some strong workouts on the dirt. Sent off at 9-2 odds under Luis Contreras, Dream It Is broke well from the middle of the starting gate, and moved right into a contending position, but she was not alone.

A wicked speed duel ensued as the two fillies on the inside, Mel's Gone Wild and Buy Sell Hold rushed up to contest a fast opening quarter of :21.99. Contreras tried to keep his filly out of the fray, but she was not far behind the top two as the juvenile fillies made their way to the far turn. Mel's Gone Wild was the first to pack it in, as Dream It Is rolled right up on the outside of Buy Sell Hold.

That one tried to go with her briefly, but it was easy to see that Contreras was sitting on a ton of horse. Dream It Is quickly assumed command, and was off to the races. The two-year-old filly spurted clear, while no one behind her was making up any ground.  From there, her rider only had to hold on, as the good looking young filly absolutely cruised to the Schuylerville finish line.

Final time for the six furlongs over the fast main track at Saratoga was a solid 1:11.85. Best Performance, who rallied for second in the Astoria stakes in her last, was easily the best of the rest. Snowfire ran on late to take the show spot.

"She made it really nice and easy," said Contreras. "She had a really nice and strong gallop. She made it very comfortable. She's got a lot of speed and likes to go. Today she was nice and relaxed. I was waiting, and every time I let her go, she would open up. I did not have a problem with her."

With the big victory, Dream It Is (Shackleford--Reve Enchante, by Medaglia d'Oro) raised her lifetime record to a perfect 3-for-3. The Hoolie Racing Stable owned filly had begun her career with two strong wins over the Tapeta main track at Woodbine, including a 4 3/4-length score in the My Dear Girl Stakes on June 24 in her last. First place money today raised the $50,000 yearling purchase's career earnings to $162,447.

"It's amazing, what can I say? To win a race and to win it like that," exclaimed Minshall. "We came with a horse that we thought was a good filly and had a shot but I can't say expected her to run as good as she did. It's ultimately the owner's decision of where we'll go next. I can't say the [Grade 1, $350,000] Spinaway for certain, but it's definitely a maybe."