Don’t sleep on Wildcat Red in the Vosburgh 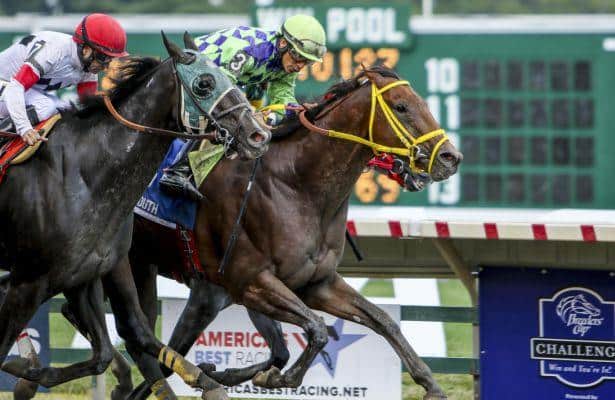 While California Chrome raced to glory down the Churchill Downs stretch on the first Saturday in May of 2014, another popular colt struggled home a troubled and tired 18th. Perhaps the speedy Wildcat Red never should have been in the ten furlong classic to begin with, but as well as he had run that winter and spring in Florida, you can understand why his connections took a shot in the Kentucky Derby. They will take another shot with him on Saturday at Belmont in the Grade 1 Vosburgh, and this time their stable star looks to be in the right spot at the right time.

After a long, tough campaign, which included three consecutive two-turn races that extended into January of this year, Wildcat Red is back from a minor injury, and back to sprinting. Owned by Salvatore Delfino’s Honors Stable Corporation, and trained by Jose Garoffalo, the Florida-bred son of D’wildcat has gotten right back to his classy ways with three solid efforts this summer.

In the Grade 2 Smile Sprint Handicap, he was given no easy task in his first race in nearly six months. Still he chased a fast pace, and came home third best to a pair of tigers in Favorite Tale and Work All Week. It was a tightener that did him plenty of good, and sure enough he was able to win a salty edition of the Teddy Drone Stakes on the Haskell Invitational undercard in his next start. It was a typically brave performance by Wildcat Red that afternoon, as he needed to split through a tight opening to get his nose in front on the wire. His third race back represented another difficult spot in the seven furlong Forego at Saratoga. He only finished fourth, but Wildcat Red’s performance in the Grade 1 Forego was actually sneaky good. After not breaking on the lead, he moved up nicely on the inside to be one of the ones in closest pursuit of the big horse, Private Zone. While no horse was going to beat the favorite on this day, Wildcat Red hung in there nicely despite being stuck on the inside, on a day where the rail was not playing overly kind. As you can see, he hung in there with The Big Beast all the way until the last few yards of the fast seven furlong race. Happily, all signs since the Forego, for Wildcat Red, have been good.

"He's very good. He came back in very good shape," Garoffalo said. "There were no issues after the race. He's eating good and happy as usual. We're very happy with the race and happier with the way he came back."

With three promising performances under his belt since his return, last year’s workhorse of America’s glamour division may be ready to do something big. Obviously, the Vosburgh is no easy spot, headed by the streaking Rock Fall from the Todd Pletcher camp, but keep in mind that this is the same Rock Fall who was all out last time to nip The Big Beast in the Vanderbilt.

Comparing the last race of each, and how they fared against The Big Beast, you can see why I have reason to believe that Wildcat Red can stick with the horse to beat in the Vosburgh. Not to say winning the prestigious sprint is as simple as beating Rock Fall, but with the chasm in odds that can be expected between the two on Saturday, you can see why I am excited to see if Wildcat Red can end the winning streak of Rock Fall at six.

He’s classy, he’s running at his best distance, and he should have some attractive odds in the Vosburgh -- I ask you, what’s not to like about Wildcat Red?