Do Racehorse Owners Owe Anything to the Fans? 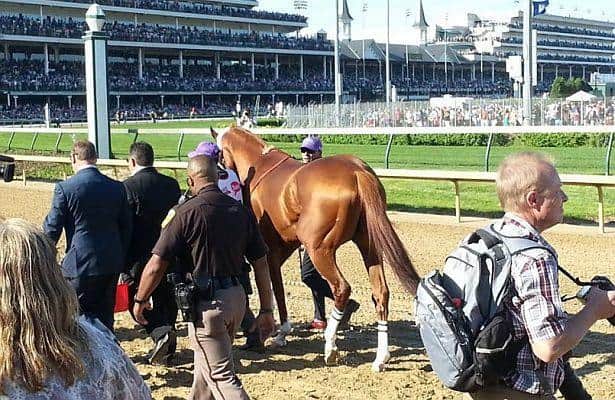 The recent back and forth between Del Mar and the ownership of California Chrome concerning getting the most popular horse in the nation to make an appearance at the Suburban San Diego oval on Pacific Classic Day, got me thinking … do racehorse owners owe anything to the fans?

In case you have not yet heard about the mess, the short version of the story goes like this: Del Mar invited California Chrome to parade in front of fans on August 24. His owners countered with a, “not unless you come up with $50,000 to cover expenses”, answer. As Del Mar is unlikely to pony up an appearance fee, the request has morphed into an opportunity for each side to make the other look bad.

Clearly the request by Del Mar to have California Chrome paraded in front of race fans on their biggest day of the meet was self serving. In yesterday’s press release on the subject, co-owner Perry Martin made no bones about his thoughts on the track’s motives.

“The only real benefit here is to Del Mar to spike attendance that was clear, at least to these Dumb-Asses.”

Self serving, sure, but would Del Mar be the only beneficiaries from the the Kentucky Derby and Preakness winner’s appearance on Pacific Classic Day, as Martin suggests? Of course not. The majority of fans in attendance that day would be happy, or perhaps thrilled, to see and pay their respects to the star 3-year-old. For some fans, it might even represent a once in a lifetime opportunity. Martin went on to recognize the fans, or at least try to rationalize their position on the subject, and how it affects the fans.

“The fans are important to us but the horse will be racing just a few weeks later not very far away.”

Fair enough. If the diehard fans of California Chrome really wanted to see him in person, he would be racing at either Los Alamitos or Santa Anita not too much later after the Pacific Classic, as a prep for the Breeder’s Cup Classic. Of course, here in real life, we know that there all sorts of reasons why fans of California Chrome might be able to be at Del Mar on Pacific Classic, but not at another location an hour or two away, and a few weeks later. And that is just on the fan side of things.

What if, for whatever reason, California Chrome does not make it back it to the races for the rest of the season? Their intentions to run their star a few more times this year might be extremely well intended, but as we all know with thoroughbred racehorses, things happen.

Martin also talks about saying no to Del Mar because they want to do what is best for the horse.

“Steve and I knew that what was best for the horse was staying home and concentrating on his return to racing.”

I have to admit, this sentence sounds good, but when you pair it with the overriding theme of the press release (why they should be paid to come down), it is hard to believe in the sincerity of the sentence. As if somehow a $50,000 check would make an afternoon at Del Mar would then become what is best for California Chrome?

In the end, my personal opinion on the subject is that it once again leaves California Chrome’s ownership smelling like less than roses, but maybe that does not matter. Afterall, this is their horse, maybe they should allowed to do with him as they please.

Maybe, or maybe, as the owners of the most popular horse in America, they have a greater responsibility. A responsibility to the fans. Within reason, shouldn’t they attempt to present the fans with another chance to celebrate him. It would seem to me that Pacific Classic Day might be “within reason”, but then again, what do I know? I’m just a DAB.

You can read Perry Martin’s press release in entirety here