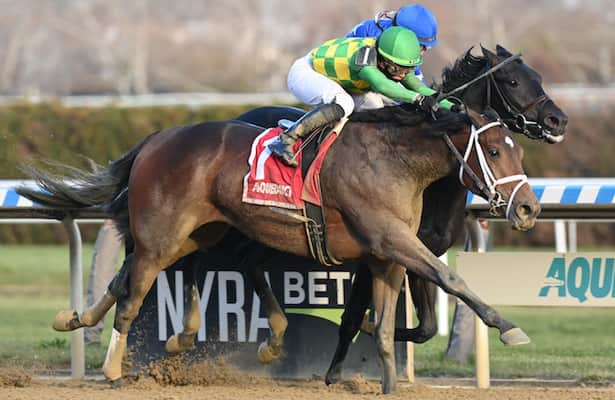 White Abarrio deserves all the credit. He was sharp early, got perfect position, and looked strong the entire way in a 4 1/2-length statement win in Saturday’s Holy Bull (G3).

It’s the type of early-season victory against a solid field that immediately will put him on a short list of the favorites for the 2022 Kentucky Derby. But he was not the horse I am most excited about moving forward out of the Gulfstream Park race.

It’s not going to impress anyone on paper, but the third-place finish by Mo Donegal was exactly the race I like to see from a horse early on the Kentucky Derby trail. Not blessed with the early speed of the winner, the son of Uncle Mo was relegated to an inside position in mid-pack as White Abarrio sat in the catbird seat right behind the early pace of long shot Galt.

The early pace was only moderate, which quickly gave the top two the tactical advantage in the 1 1/16-mile race. Things were made easier for Galt and White Abarrio when Simplification, one of the race favorites, did not break sharply and was well off the leading fractions.

It was actually a move by Simplification on the backstretch that kept Mo Donegal and rider Irad Ortiz Jr. from shifting to the outside heading into the final turn. That was the spot when the race was lost for the 17-10 race favorite.

Stymied to move to the outside while attempting to go with Simplification, Mo Donegal instead found traffic directly in front of him and lost the momentum that he had just begun. Slowed down on the inside, horse and rider had to wait before successfully finding open running room to the outside.

At the same time, White Abarrio was running smoothly past Galt and accelerating to a clear lead at the head of the stretch. Like I said, he deserves all the credit for his impressive victory in the Holy Bull, but this was 8 1/2 furlongs at Gulfstream Park. It’s a far cry from 10 furlongs on the first Saturday in May.

To his credit, Mo Donegal, who had swung out with no momentum at all and was hopelessly beaten at the top of the lane, leveled off in mid-stretch and came running. The way he finished, just missing second to Simplification by a head-bob, tells me that with a better trip he would have been much closer to the winner. But as far as the Kentucky Derby is concerned, the result really doesn’t matter.

They call it a prep for a reason, and Saturday’s race was a nice prize along the way but only a steppingstone for bigger things to come. Of course, that most specifically being the May 7 Run for the Roses, 91 days removed from the Holy Bull.

The more I see of Mo Donegal, the more I like him. In fact, with each race he runs, I like him better.

Owned by Jerry Crawford’s Donegal Racing, the bay colt was purchased for $250,000 at the Keeneland September Yearling Sale of 2020. Sent to two-time Kentucky Derby winning trainer Todd Pletcher, he made his racing debut on Sept. 30 at Belmont Park.

Not made for sprinting, Mo Donegal still made up plenty of ground and overcame trouble in his debut to finish third in the 6 1/2-furlong maiden race. Wasting no time in stretching him out, Pletcher brought him back three weeks later in another maiden race at Belmont, this time going 8 1/2 furlongs.

The result was as hoped for, and he finished strongly to win by 1 1/2 lengths. From there, Mo Donegal went on to the 1 1/8-mile Remsen (G2) at Aqueduct and won a spirited stretch duel over another talented horse by a nose. Zandon is certainly one to watch moving forward as well, but the Pletcher winner showed his toughness in the win.

Doing well, it was decided to start his 3-year-old season in the Holy Bull, even though it was a slight cut back in distance and on a track that generally favors speed. There simply aren’t any Derby preps longer at this time of year.

Now 2-for-4 in his career with two wins and two third-place finishes, Mo Donegal looks perfectly suited to stretch out for his next prep before getting to the classic distances of May and June.

After Saturday’s third-place finish, Mo Donegal will not be one of the more talked about horses as we move along this year’s Kentucky Derby trail. Instead, it will be the prep winners such as White Abarrio who get all the buzz.

It’s not a scientific approach, but my feeling is that we are due to have the Derby won from off the pace. Recent runnings of the big race have been dominated from up front, and trends like that eventually reverse themselves.

I am convinced that Mo Donegal wants every bit of the 1 1/4 miles of the Kentucky Derby, and after Saturday’s traffic trouble and fast finish, he looks to me to have the talent necessary to wear the roses three months from now.