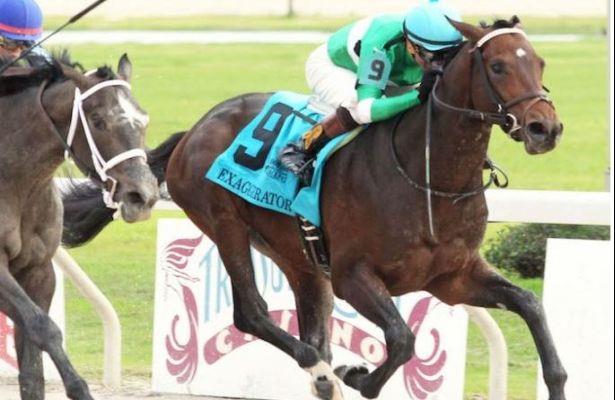 With recent winners with as much class as Goldencents and Exaggerator, the $1,000,000 Delta Downs Jackpot has become a race worthy of its purse. In fact, in the first 13 runnings, 14 horses have gone in to start on the first Saturday in May, with the second-place finishes of Exaggerator, this year, and Closing Argument, back in 2005, being the best results. The winner of next Saturday’s rich 1 1/16-mile affair will bank 10 qualifying points toward a run in the 2017 Kentucky Derby. Without further ado, let’s take a look at the ten-horse field, including morning line odds and my analysis …

9) J Boys Echo (8-1) – While Not This Time has rightfully received most of the attention, another colt from the Albaugh Family Stable and Dale Romans team looks to also have a bright future. A fast-closing second in a good maiden race at Churchill Downs in his career debut, this son of Mineshaft came right back to blow the doors of a maiden field at Keeneland. In that 8 ½-furlong race, he overcame trouble to win going away. Delta Downs is not the easiest place to rally, but with plenty of speed in here, and at a distance he appreciates, I look for him to pick up all the pieces. The Top Pick

8) Hot Sean (7-2) – The hits keep coming for trainer Bob Baffert, and Hot Sean certainly is in this million-dollar race with a big chance. After running a good second to a highly regarded colt in his debut, the son of Flatter was able to string together consecutive victories at Santa Anita. He has speed to be on the lead, but has also proven not to need the lead to win. Look for him to vie for favoritism with the one just below, and be the most likely of the front-runners to stick around all the way to the wire. Another Talented Baffert

6) Gunnevera (5-2) –The proven class of the race, this son of Dialed In has faced good horses from day one. A winner in the Grade 2 Saratoga Special, he came up a little short in his first try around two-turns in the Grade 1 Breeders’ Futurity, but that was against the soon to be Juvenile Champion, Classic Empire. Like the top selection, he will need to navigate the tight turns at Delta to pick up the speed in here, but there is little doubt that he fits in with this group. Proven Class

2) Line Judge (6-1) – The speedy son of Spring At Last took his excellent form at Canterbury Park to Delta Downs and scored an impressive front-running victory in the local prep. The nice 3 ¾-length win in the Jean Lafitte proves he can both handle two-turns and the nuances of Delta Downs. With more quality speed lining up for this one, and an extra sixteenth of a mile to navigate, his job looks tougher this time around, but he should not be discounted for trainer Joe Sharp. Speedy Local Prep Hero

3) Thirstforlife (8-1) – The first of two in a row from the Mark Casse barn, the son of Stay Thirsty was always well liked. In fact, he made his career debut in a stakes race at Churchill Downs. He has not been able to connect in three tries so far in stakes racing, but has not been embarrassed either. Dropped to allowance company in his latest, he scored a win at the distance at Keeneland. The experienced runner will not my top pick, but certainly merits respect. Experience on His Side

4) Our Stormin Norman (8-1) – Another experienced colt from Casse, Out Stormin Norman sandwiched three starts on turf with two very nice efforts on the dirt. Last time at Keeneland, he showed impressive speed to dominate a seven-furlong maiden race at Keeneland in fast time, while donning blinkers for the first time. He looks to be part of a contentious pace, but his last points out that he is a talented horse. Sharp Maiden Score

7) Balandeen (10-1) – After a tough start to his career, this son of Bernardini really woke up in his third start. Two straight wins led to his stakes debut last time, where he finished a good second to the talented McCraken in the Street Sense at Churchill Downs. While the last three are good enough to compete in here, there is still not quite enough showing for me to love his chances in the Jackpot. On the Improve

10) Tip Tap Tapizar (10-1) – Having this one so far down the list goes to show the quality depth of this field. The Steve Asmussen runner has done nothing wrong in five career starts, the last four coming in stakes racing. The Sapling winner had his chance in the Jean Laffite las time, but could not stay with Line Judge. Perhaps with a different pace scenario, he has a better chance, but as for the win, I like better others. Hasn’t Beaten the Good Ones

1) Pat On The Back (15-1) – With three wins and a second in his last four starts, this Ken McPeek-trained colt has proven to be one of the best New York-bred juveniles so far unveiled on the East Coast. How well that translates in his first try against open company will be the question. My guess is that it will prove a bit too much. Not a complete throw-out, he looks to be more of a threat for a minor award in here. Tests Open Company

5) Dangerfield (12-1) – Much like Rodney, I’m not sure how much to respect this one. He was winless in three starts in maiden company before breaking through in a stakes race of questionable class while stretching out for the first time. You have to respect the barn, but I am willing to predict this one will struggle against the class of the field. Tough Spot